Failed policies cause domestic manufactures to import medical devices, while the government wants India to list among top five medical devices manufacturing hubs in the world under the 'Make in India' initiative Most of the domestic medical device manufacturers in India are either shutting their units, or becoming importers and traders.

Failed policies cause domestic manufactures to import medical devices, while the government wants India to list among top five medical devices manufacturing hubs in the world under the 'Make in India' initiative.

The Union Government's widely publicised initiative to promote medical devices manufacturing and exports from India under the 'Make in India' initiative has come a cropper. In fact, most of domestic manufacturers of the Rs 1,05,000-crore industry (at patient level selling price) in India are either closing down their units or idling manufacturing capacities to become importers and traders of medical devices. 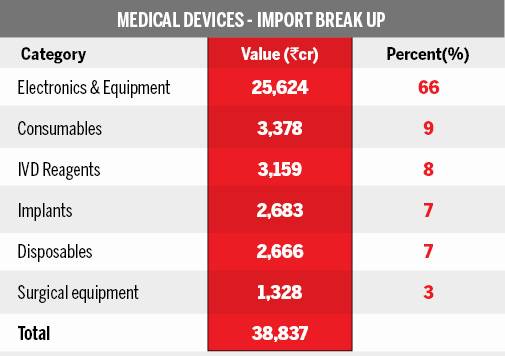 "Many Indian manufacturers have reconciled with the fact that government is seemingly unwilling to correct the low tariff structure prevalent since 2010. They have adapted to a new business strategy of importing rather than making in India as it is convenient and cheaper," said Rajiv Nath, Forum Coordinator, Association of Indian Medical Device Industry (AiMeD). Even overseas multinational companies with deep pockets, which control 80 per cent of the domestic market and have the option of 100 per cent foreign direct investment in India through the automatic route, have not bothered to put up new factories in India in the past several years and are concentrating on creating trading arms. This is despite the 'Make in India' schemes and incentives, as they do not have market access barriers and have free access to the Indian market with negligible customs duties varying only from 0-7.5 per cent, which is very low, said industry sources.

Domestic manufacturers further say that they are losing competitive edge post the implementation of Goods and Services Tax (GST) as cost of imports have gone down by 11 per cent. Now importers can avail GST input credit, which they were not availing earlier. Earlier, with 6 per cent countervailing duty (CVD) and a special additional duty (SAD) of 4 per cent levied on all imports, no such advantage was available to medical devices traders. As a result, most of manufacturers have resorted to import various medical devices from countries such as China and Vietnam and brand the products with own labels and sell in the market, than making in India.

"There were at least 25-30 thermometre manufacturing units in India until a few years ago, but now there is none. Similarly, for decades in existence there were thriving surgical equipment manufacturing hubs in Jalandhar in Punjab and in Barampur in West Bengal with hundreds of units. However, it seems none are now manufacturing there," said Nath of AiMeD.

"Incentives in the form of land or buildings in the name of medical devices park will not help domestic manufacturers, as we cannot compete with multinational companies with deep pockets, technology and lobbying power. What we require is a level playing field with entry barriers, more reforms, and supportive measures to make India a global medical device manufacturing hub and reduce the current import dependency of 70-90 per cent," says GSK Velu, chairman and managing director of Chennai based Trivitron, the largest domestic manufacturer.

A string of failed incentives

Besides bringing in global regulatory norms and global standards of quality, the industry has been demanding a separate regulator for the industry, which is regulated by India's drug regulator, the Central Drugs Standard Control Organisation (CDSCO)under the Directorate General of Health Services,Ministry of Health & Family Welfare. Another demand was to bring in a medical devices price control order in place, similar to that of the Drugs Prices Control Order. In 2016, a government-appointed task force came up with a draft Medical Devices Policy, which was aimed at making India a global hub for manufacturing and exporting medical devices. "The draft has not gone an inch forward to come up as a proper Medical Devices Act," says an industry representative, who feels the multinational lobbies are powerful enough to block any move to regulate sale of medical devices in the country.

Another move from the government was to set up a National Medical Devices Development Council to realise the vision of India to be among the top five medical devices manufacturing hubs worldwide. Along with that, plans were to set up a medical devices export promotion council, in the lines of the Pharmaceutical Export Promotion Council and a National Medical Devices Design Centre. "In December, the Commerce Ministry announced the Council will be headed by Secretary, Department of Industrial Policy and Promotion (DIPP) and will have representatives from concerned departments of the government, health care industry and quality control institutions, but it is yet to take off," says the industry representative. Another initiative was to set up a string of medical devices parks in India. But, only two parks have come up so far, and the first one came up at Andhra Pradesh MedTech Zone in Visakhapatnam. Within a year of the launch of the Vizag park, the competing Telangana government started a 250-acre park at Sultanpur in Medak district. Earlier, two private medical devices parks were experimented in the country, but both have failed to attract investors, said sources.

What needs to be done

Industry players say the government should accelerate further reforms and bring in supportive measures  in order to make India a global medical device manufacturing hub and to provide a level playing field for domestic manufacturers. Despite repeated assurances from the government, Union Finance Minister Nirmala Sitharaman's Budget 2019-20 ignored the medical devices sector. The industry's demand was to increase the custom duty on medical devices to 15-20 per cent to promote indigenous manufactures. In order to reduce India's heavy reliance on import, the current basic import tariff of 0-7.5 per cent needs to be over 15 per cent, while medical device and concessional duty on raw material may be retained at 2.5 per cent for the next three years, they demand. In India, 30 per cent of the procurement is for state and Central government-run public hospitals and now Chinese imported products are bagging the tenders. Industry players say the surge in imports can be curbed by a phased manufacturing plan and predictable tariff structure linked with manufacturing capacity and international competitive capabilities.

"Manufacturing in sectors such as consumer electronics and mobile phones has seen a huge spurt over the last two years after customs duty was increased to 15-20 per cent. The same success can be replicated in the medical devices sector," Nath of AiMeD suggested.