As firms in India are expanding their footprint globally, they not only need to be competitive but also win the trust of both local and global customer and this will not be possible without following the best practices

The rules will be open to receive feedback from stakeholders upon which the rules to implement the OSH code will be finalised.  The stakeholders will get 45 days to provide the feedback starting November 19. The government's key argument behind the brobdingnagian task of simplifying the age-old labour laws in the country is to move towards formalisation of the huge informal sector that exists in the country today.

Hence, the OSH code 2020 shows a considerable shift in the government's approach with which the draft rules have been framed.    "The earlier labour laws were made with the underlying assumption that since profit making is the primary objective of an entrepreneur the likelihood is that labour will not get their due unless their interest is adequately protected by the law," says Sunil Sinha, Principal Economist, India Ratings. 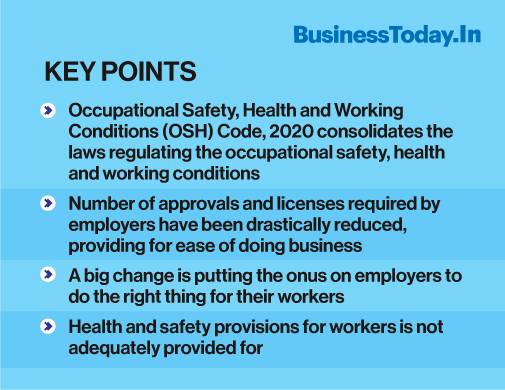 But in the recently released OSH draft rules onus has been put on the employer to do the right thing. As firms in India are expanding their footprint globally, they not only need to be competitive but also win the trust of both local and global customer and this will not be possible without following the best practices. This is perhaps the reason that OSH draft includes many new provisions which essentially revolves around the threshold for several approvals, and certifications have been increased or removed in several cases, says Sinha.

For the industry, the biggest hurdle that has been removed is the enormous amount of approvals that were required. Suchita Dutta, executive director, Indian Staffing Federation (ISF) says almost 3,000 different licenses and approvals that possibly every employer and staffing firm had to take on the administrative processes have been removed which is a big welcome.

"Nothing else defines ease of doing business better than the removal of this huge number of mandatory regulatory permissions," she says.   For instance, earlier staffing firms had to take licenses under Contract Labour Registration Act (CLRA) for each set of deployment of people beyond 20 in a particular location.

Also, every location meant a new license. This was a time consuming process as it had to be obtained physically from the licensing office. Now, a provision for a national license valid for five years without any restriction on number of people has been introduced.

"The entire process of deployment could take from seven days to a month which was a single most reason for firms not hiring contract workers from formal sources," she says.  That deterrent has been taken off which will not only help in driving formalisation but offering them the protection formal workers get.

Another major move towards ease of doing business that has been applauded by employers is the increase in working hours. The current draft rules allow a shift to be from eight/nine hours to up to 12 hours.

Despite the weekly cap remaining same, Lohit Bhatia, President, ISF and President Workforce Management, Quess Corp explains that the extension of daily working hours will help employers significantly, especially in manufacturing. "Any factory with continuous processes such as in an assembly line or a furnace that has to be kept burning, it was a humongous effort to get people in and out of the factory in three shifts."

For instance, if 100 people are required at one time in a factory, so for three shifts, 300 people had to be managed and provided transport on a daily basis. Now, it would reduce to 200 per day. Though, since these 200 people will saturate their working hours in 4 days, additional staff will have to be required to come in the extra three days.

Bhatia adds that facility management companies and security guards providers currently get their workers to do two shifts of 12 hours after getting necessary approvals. "The new provision means less regulatory hassle and makes it very easy for the company to deploy staff," he says.

However, labour economists feel draft rules currently favour employers and don't take into account worker welfare as much as they should.

"While the Government has been doing considerable work on issue of ease of doing business, it has to be a two-way street when it comes to worker rights, safety, health and working conditions as well," Sinha of India Ratings says.

India is talking of becoming a manufacturing hub for the world, but a country can't provide world class products and services without taking care of its people. "Extension of working hours should have met with a similar increase in provisions for wellbeing and safety of the labour which isn't really the case," he says.

For instance, by making 12 hours as a spread-over time, and if travel time is included (which in metros is easily another 60 minutes) then the work-life balance of the workers will be adversely affected, says K.R. Shyam Sundar, Professor, HRM Area, XLRI, Xavier School of Management. "It might also reduce the number of people employed as the organisation would want to get more work done from less number of people," he says.

Another contentious rule is the one that asks employers to provide free annual health examination for every worker who has completed 45 years of age.

Sundar says this will exclude a good proportion of workers in a factory and in other covered establishments and encourage employers to hire younger workers to reduce labour cost.  "This not only constitutes a 'age discrimination' practice and also segment the workforce in an establishment by age," he says.

Safety is also not adequately provided for, some feel. Under the rules, safety committee is mandatory for factories with more than 500 workers, and for factories engaging in hazardous process the threshold is 250 workers.

"With tremendous improvements taking place in the field of technology (robotics, automation, AI, etc.) and the rise of capital intensive industries, the average size of a factory will be less than 500+ but safety considerations could be significant in them as well if not more. In case of smaller establishments, i.e.

Also read: Burnt out with work from home? This software will make life easy