Budget 2020: The one figure that can give some idea if the situation is indeed so desperate or if we are just being paranoid is the tax revenue to GDP ratio

Budget 2020: With the annual budget around the corner the focus now is now on whether the government has enough fiscal space to perk up the economy. However, one question that continues to haunt the country is if the government is collecting enough taxes to spend on the economy to both bolster infrastructure and boost private consumption.

For far too long the narrative that burden of the economy is being shared by a handful of taxpayers as the government continues to struggle to increase the tax base has been gaining ground. Is it really that bad a situation? Are we really an under-taxed country?

The one figure that can give some idea if the situation is indeed so desperate or if we are just being paranoid is the tax revenue to GDP ratio (tax-GDP ratio).

The tax-GDP ratio of the country (after including the Centre and states' tax revenue) was 17-17.5 per cent till 2018-19. This is almost half of the average tax-GDP ratio of Organisation for Economic Corporation and Development (OECD) countries, which was 34.3 per cent in 2018.

However, OECD has 36 member countries with most of them from the developed world. Such high average tax-GDP ratio in OECD could be attributed to some of the European countries like France with a tax-GDP ratio of 46 per cent, Denmark and Belgium (45 per cent), Sweden (44 per cent), Finland (42 per cent), etc.  However, when compared with the tax-GDP ratio of the US (also an OECD country), which was 24 per cent in 2018, India's number does not look that bad given the significant difference in per capita income of the two countries. The per capita income of the US in 2018 was around $63,000 compared to $2,020 of India.

India also does well in comparison to neighbouring countries like Bangladesh (9.6 per cent) and Sri Lanka (13.8 per cent).

Since no comparison of India is complete without China, it would be heartening to know that India fares not too badly compared to its Asian rival either. The country's tax-GDP is 21 per cent at per capita income of $9,770.

Balance in favour of indirect taxes

The tax-GDP ratio does not necessarily support the narrative that India is an under-taxed country. A reason for this is that the majority of the country's tax revenue -- the Centre and states combined - comes from indirect and consumption taxes (like GST, sales tax, property tax, etc).

A skewed composition of tax revenue in favour of indirect taxes, say experts, is not what a country like India needs. Indirect taxes are considered regressive in nature as tax rates are same for poor and rich alike.

Why so few income tax payees?

The perception that India is under-taxed is largely because of such low percentage of income tax payers. However, experts say this number has to be seen in context of India's demography, labour participation rate and per capita income.

Besides, significantly high percentage of the labour force in India is involved in agriculture, the income from which is not taxed.

And one of the biggest factors for a fewer number of income tax payers is low per capita income. According to the National Statistical Office, the per Capita Net National Income during 2019-20 is estimated to be Rs 1,35,050 compared to Rs 1,26,406 in 2018-19. In dollar term, it is $2,020, which as mentioned earlier is way below countries like the US, UK and China.

The income tax exemption limit was increased from Rs 2,50,000 to Rs 5,00,000 last year in the interim budget in February. This could further lower the tax base.

Former Chief Economic Advisor Arvind Subramanian in one of his papers on India economy in December last year noted: "...structurally, India should be thinking of ways to bring more taxpayers into the income tax net. It should not be raising exemption limits, as was done unfortunately in the 2019-20 Budget."

Though on the matrix of tax-GDP ratio, India may not be faring too badly, it needs ways to increase the income tax base. 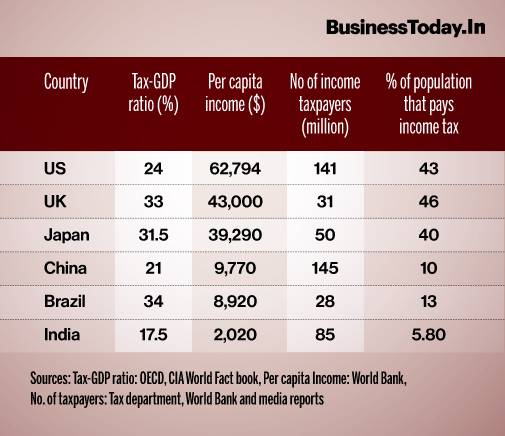