Rebooting Economy 62: Economic growth for whom and for what?

For people to benefit, the budget needs overhauling to create jobs; revive small businesses; address poverty and health and education deprivations. Pursuing the existing paradigm of growth may push GDP and stock markets up without improving the living standards of the vast majority

Hours left for the first budget after the pandemic struck, reviving economic growth is uppermost in everyone's mind. But what does economic growth mean? Is it growth in GDP numbers or a boom in stock market? More significantly, what does it have for ordinary citizens?

These questions assume significance because the pandemic has hit them the hardest, particularly the poorer segment. The World Bank, IMF, and Brookings Institute reports say India would see the most number of people slipping into 'extreme poverty' (per capita per day living expense of $1.9). The estimates vary from 40 million to 85 million of additional extreme poor. The Oxfam International's January 22, 2021 report says inequalities in health and education too have risen sharply.

A budget's success does not necessarily mean higher GDP and stock market numbers. As long as the living standards of people don't improve none of it counts for most. About 2% of Indians invest in stock markets and the number of those familiar with the GDP construct is unlikely to be more.

Here are some major concerns about the budgeting exercise.

Invariably, the first news about budget preparations is finance minister meeting industry leaders (much before the 'halwa ceremony'). This year is no different.

Ironically, such privileges are rarely, if ever, given to leaders of the two other sectors of the economy: agriculture and services.

Here is a graph mapping the contributions of industry to India's national income (GDP) and employment since 1950 to show how partisan this approach is. Industry has never contributed even 25% to the GDP (national income) and its maximum share in employment never touched 14% in India's post-independent history. Why is it so important for governments?

Why agriculture and services sectors contributing 76-89% to the national income (GDP) and 87-91% to the total employment since 1950 don't find a place in the high table for pre-budget discussions?

How will the budget be well-informed, or does what is needed when the overwhelming majority of people depending on agriculture and services for their income and employment is seldom, if ever, heard?

While the Indian economy is sinking, stock markets are scaling new highs. Both BSE Sensex and Nifty50 reached historic levels on January 21, 2021, amidst loud cheering. The following graphs map stock market highs since January 24, 2020, when they hit the pre-pandemic highs. 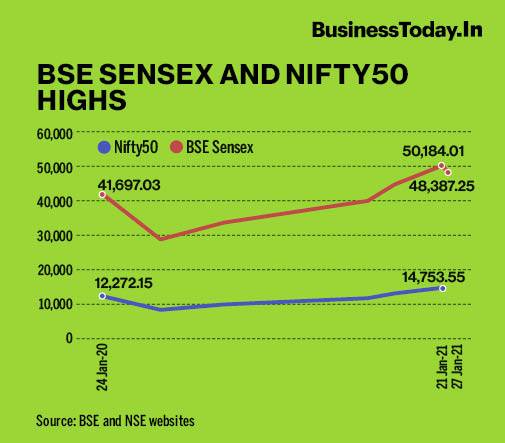 How is the stock market boom linked to India's economic growth?

There is no link.

The following graph shows how quarterly GDP growth tumbled from a high of 9.7% in Q2 of FY17 to minus 7.5% in Q2 of FY21. For the full fiscal year of FY21, the GDP growth is expected to be minus 7.7%. Yet the stock market kept galloping. Why is the stock market boom then relevant for the budget?

It is because stock market booms are directly linked to government's monetary and fiscal measures, not just during the pandemic but in earlier years. This is a global phenomenon.

The RBI's Financial Stability Report (FSR) of January 11, 2021, said India's stimulus packages to revive growth have had "unintended consequences" (though historical and contemporary evidence are all around us for the RBI to know better). Among others, it said, "the disconnect" between some segments of financial markets (like the booming stock market) and the real economy "has been accentuated" and "pose risks to financial stability" as a consequence of the stimulus packages. Not just liquidity traps, it warned of delayed recovery due to "macro-financial risks". (For more read "Rebooting Economy 60: India in a financial mess of its own making")

What this means for the budget is to replace India's liquidity-driven growth model with a fiscal spending-driven one. The problem with India's economy is well known. A prolonged demand depression has led to low production and capacity utilisation of goods and services, reducing the need for credit or capital investment. Demand can be revived by raising the incomes of people, rather than bank credits.

Is the budget ready for this overhaul?

Unless that happens, stock markets will boom while the economy sinks and hunger, health, and education deprivations touch new lows.

Budgeting to address poverty, hunger and other inequalities?

The following graph is taken from their book to reflect the rise in income inequality. The pandemic delivered a bigger blow to the bottom 50% and income inequalities have risen sharply.

The Oxfam International's report of January 22, 2021, says that while the pandemic triggered massive job loss (122 million lost jobs, 75% of which are in informal sector), hunger, distress migration, "India's 100 billionaires saw their fortunes increase by Rs 12,97,822 crore since March 2020, enough to give every one of the 138 million poorest Indian people a cheque for Rs 94,045 each".

Not just income inequality, health, and education inequalities also rose sharply. As for health, the Oxfam report says, despite high out-of-pocket expenditure, half of India's population has no access to basic healthcare because of prolonged low government spending. About education, it says low digital infrastructure (internet connections) and poverty (lack of smartphones and computers) have deprived rural children of access to education during the pandemic.

Given these historical and pandemic developments, the budget would need to devise ways and means to reduce poverty and hunger by raising income, create new livelihood opportunities, and reduce health and education deprivations by investing in public infrastructure (health and education, not roads and ports).

These challenges exist for long but were never acknowledged in budgets in the past few years. Will the 2021 budget opt for course correction?

In recent times, poor fiscal resources, arising out of pre-pandemic slowdown and pandemic lockdown, are often paraded to justify low government spending on people's wellbeing. A fall in tax collection is cited but the untimely and unwarranted corporate tax cuts (direct tax) to the tune of Rs 1.45 lakh crore) in September 2019 are omitted.

This tax cut came amidst resource crunch to pay GST compensations to states and is not a one-time affair but would reduce revenues for years to come. It was premised on high investment and new jobs but none of it happened nor was intended.

On the other hand, tax on petrol, diesel, and CNG gas (indirect tax) - more plebian in nature than corporate tax - keeps rising when international prices have remained low for years, thereby depriving people of the benefits. Fuel prices long seized to be regulated and are fully market-linked, meaning any fall in prices should be passed on. A lop-sided fuel tax regime has its own inflationary impact.

The Fiscal Responsibility and Budget Management Act (FRBM) of 2003 has become a convenient tool to check fiscal spending that helps ordinary people, particularly funding public health and education as well as welfare programmes for the poor and disadvantaged. It never comes in the way of liquidity infusion that leads to stock market booms and enriches billionaires, feeds monopolies, not just in India but wherever practiced in the world.

Indeed, many economists and policy experts often call for cutting down "unproductive subsidies" (food and fertiliser subsidies etc.) to fund "productive" investments, which often means pro-industry measures. Not many, not even the RBI calls for a stop to writing off loan defaults (some of which are deliberate and mala fide as investigations have revealed) by big industrial houses or to stop recapitalising banks to further incentivise loan write-offs. Prof. Arvind Panagariya, former Niti Aayog vice-chairman, recently wrote asking the finance minister to recapitalise banks in advance, knowing well that more defaults are on the way.

Few seek to re-impose wealth tax abolished in 2016 or tax those who have disproportionately gained from government policies over the years to raise fiscal resources. The wealthy have benefitted by way of tax subsidies (tax cuts and tax holidays), tax evasions (through tax havens and shell companies due to lax regulation), easy money (low-interest credits), and frequent bailouts (annual loan/NPA write-offs, stimulus packages, etc.). They benefitted from the tax cuts of September 2019 too. (For more read "Coronavirus Lockdown XII: Why the wealthy should be taxed more ")

The Oxfam's January 2021 report mentioned earlier says "if India's top 11 billionaires are taxed at just 1% on the increase in their wealth during the pandemic, it will be enough to increase the allocation of Jan Aushadi Scheme by 140 times, which provides affordable medicines to the poor and marginalised".

Even government investment in infrastructure is more often about roads, ports and freight-corridors (preferably through PPPs) that directly benefit private businesses, seldom about hospitals and schools that directly benefit the vast majority. Healthcare and education became prohibitively costly after fiscal spending was reduced and private sector was handed over the baton post-1991 liberalisation.

A 2018 study ("Measuring human capital: A systematic analysis of 195 countries and territories, 1990 to 2016") by the Institute for Health Metrics and Evaluation (IHME) had warned India about falling social sector investment leading to lower health and education standards of its workforce and harming its long-term economic growth. India fared worse in these aspects compared to its neighbours Sri Lanka, Nepal, Maldives, and Bhutan. Yet no heed was paid in subsequent budgets.

Ironically, the FRBM is suitably compromised through exaggerated growth numbers and off-budget borrowing.

For example, the February 1, 2020 budget projected a 10% GDP growth rate for FY21 when the first advance estimates released on January 7, 2020, had already said the FY20 growth would be 5%. A 10% growth projection exaggerates revenue receipts and lowers the deficit, beating the FRBM calculations.

Similarly, off-budget finances have beaten the FRBM hollow. Public sector entities are asked to borrow from the market as such borrowings don't get reflected in budgets. For example, the Food Corporation of India (FCI) routinely borrows money from the market, allowing budgets to show low food subsidies and escape compliance with FRBM norms. The Comptroller Auditor General of India (CAG) has been flagging this issue without any impact on subsequent budgets.

Would the 2021 budget rise to the occasion?