News
Crypto
Crypto markets tank over the weekend; Bitcoin below $39,000

Crypto markets tank over the weekend; Bitcoin below $39,000

The USDC stable coin slipped by 0.05 per cent unlike the USDT stable coin, which showed no difference in its value in the last 24 hours.

Cryptocurrency markets crashed over the weekend as the global market cap fell by 3.80 per cent in the last 24 hours, and is at $1.70 trillion as of 8:00 am IST, CoinMarketCap data showed on Monday.

The ETH token also dropped by 4.81 per cent.

The USDC stable coin slipped by 0.05 per cent unlike the USDT stable coin, which showed no difference in its value in the last 24 hours.

It is noteworthy to mention that both these tokens are pegged to the US Dollar.

The BNB token, native to the Binance exchange, dropped by 4.40 per cent. XRP Ripple also fell by 4.62 per cent. 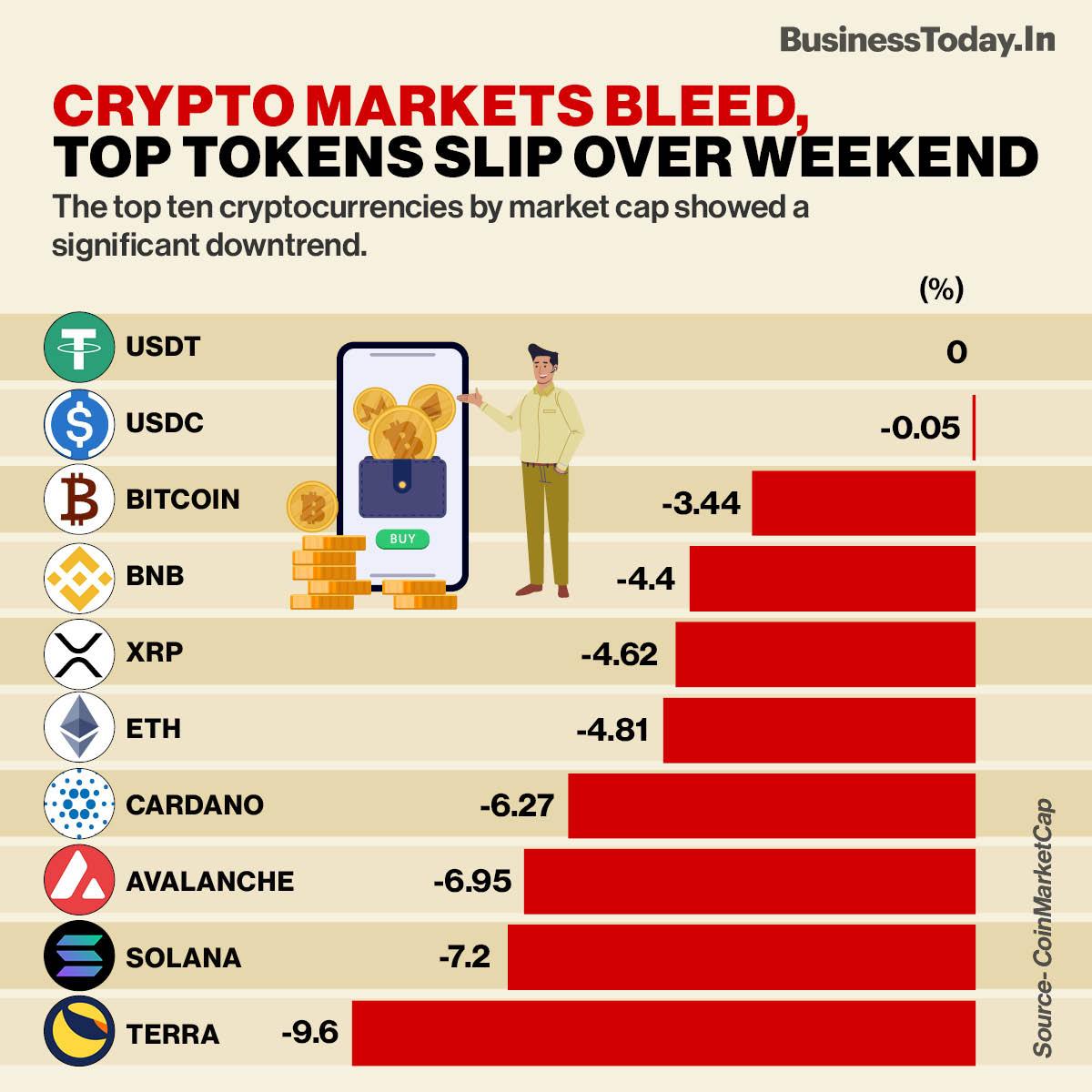 Terra LUNA slipped by a whooping 9.60 per cent in the last 24 hours. But it is noteworthy to mention that the token is actually up by 7.31 per cent as compared to its value last Monday.

The ADA token, native to the Cardano blockchain, tumbled by 6.27 per cent. SOL token of the Solana exchange also slipped 7.20 per cent.

The Avalanche token, the tenth largest cryptocurrency by market cap, dropped by 6.95 per cent and was trading at $71.50.

Memecoins like Dogecoin and Shiba Inu were also hit by the slump. They slipped by 3.89 per cent and 4.83 per cent respectively.

Notably, crypto asset donations to Ukraine have slowed down. Ukraine added only a little over $4.5 million to its coffers over the weekend.

The biggest gainers of the day were tokens like Meta Speed Game, which went up by an astronomical 575.77 per cent and Sakura Bloom token, which went up by a whopping 359.43 per cent. Parody meme coins like Alien Shiba Inu, Peace Doge and Amazing Doge all went up by over 200 per cent each.

Furthermore, tokens like the ASIX and Doge Rise Up, which were the top players on Friday, fell by over 80 percent in the last 24 hours. Megan Swap, TATA coin and ZUM token were other tokens who fell by over 75 per cent becoming the biggest losers of the day.