The two etailers are looking to double the number they had hired for the festive season last year. 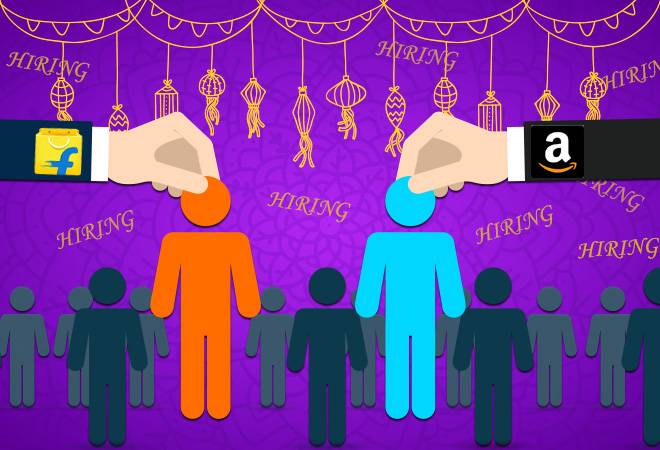 With just days to go before the Diwali holiday sales kick-in, the country's largest etailers are busy beefing up their rolls to cater to the massive spike in orders over the festive season. The buzz is that around 1.20 lakh new temporary jobs are likely to be created by Walmart-backed Flipkart and Amazon India alone, while the total additional manpower requirement during the season is pegged to be 66% higher.

Citing executives at recruitment companies that provide temporary staffing solutions, The Economic Times reported that the two etailers are looking to double the number they had hired for the festive season last year. According to them, the recruitment drive is being fuelled by the Bengaluru-based homegrown player flexing its added financial muscle post the acquisition by the world's largest retailer.

With an eye on the upcoming battle, Flipkart is reportedly readying an army of foot soldiers - delivery boys as well as those managing deliveries in warehouses and hubs - to ensure that all backend operations including last-mile delivery go off without a hitch.

Not to be outdone, Amazon has had little choice but to match the investments made by the rejuvenated Flipkart, especially since Redseer Consulting claims that it lost the Great Indian Festive Sale vs Big Billion Days (Flipkart's flagship event) battle earlier this month.

"Flipkart has been frugal in their plans the past couple of years," Rituparna Chakraborty, cofounder of TeamLease Services, told the daily "However, with the fresh cash infusion and with Walmart coming in, they... are aggressive this year. For Amazon, it is about effectively competing with a revitalised Flipkart. They will take the fight to their door clearly."

Although hiring temporary workers has traditionally made sense for ecommerce companies, things are markedly different this year, courtesy the cut-throat competition for a larger share of the market that's projected to grow at a compounded rate of 21% over the next decade to $202 billion.

"As the competition for a larger market share is at an all-time high, we see lesser reliance on third parties for manpower among top players," Ujjwal Chaudhry, engagement manager at RedSeer, told the daily. So the two arch rivals are hiring a higher number of delivery and logistics executives in order to have greater control over these areas. "This year has so far been the best in terms of investments in marketing, products and human resources made by these two companies," Chaudhry added.

According to experts, sectors such as fast-moving consumer goods (FMCG), retail and ecommerce will drive the demand for additional manpower this festive season to a whopping 2 lakh. That's not including the number of indirect jobs slated to be created in packaging and warehouse management. Flipkart's spokesperson reported estimated 5 lakh plus jobs to be generated by the company's network of sellers as they, too, prepare for the festive season demand.

Flipkart has, in fact, scaled up hiring this year by leveraging alternative delivery models in existing communities. "This year we have scaled up our FQuick service, which allows people from all walks of lives to take up delivery, as freelancers," the spokesperson told the daily. Flipkart carries out 35% of its total deliveries through this model.

Ahead of their respective flagship festive sales, Great Indian Festival Sale and Big Billion Days, Amazon and Flipkart had already announced the creation of 80,000 seasonal positions between them.

Indians spent over Rs 50,000 crore on Chinese smartphones in a year

Rahul Gandhi mixes up Manipur and Mizoram; BJP says his 'ignorance' is problematic