Billionaire reviewer! Jeff Bezos used to review products on Amazon; check them out

Bezos seemed to have only reviewed the products he liked as all his reviews award 5-star rating to the product being judged. The six products reviewed by the outgoing Amazon CEO range from non-fiction books to a bottle of milk 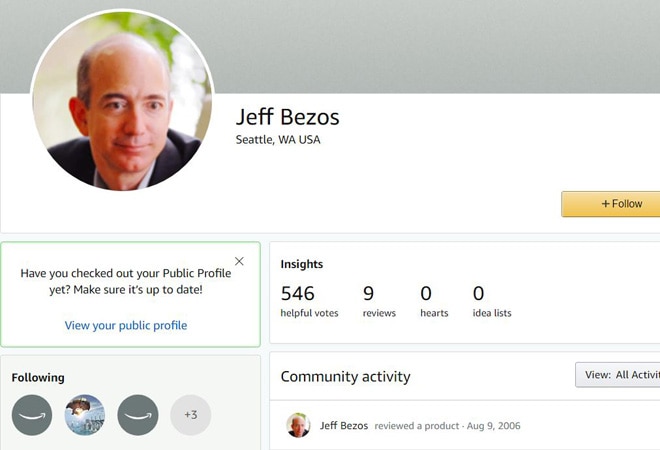 The product reviews were written between 2000 and 2006

Jeff Bezos is primarily known for two things - being the world's richest man and founding Amazon. What a lot of people don't know is that Bezos used to have a 'side-hustle' -- reviewing products on Amazon. The Amazon CEO is the e-commerce giant's 78,951,609th-ranked reviewer.

A recent investigation by Inc Magazine has unearthed six reviews written by Amazon founder Jeff Bezos. The product reviews were written between 2000 and 2006. They offer an insight into the mind of the world's richest man. An Amazan spokesperson had confirmed to the magazine that Bezos's old Amazon profile was indeed authentic.

Bezos seemed to have only reviewed the products he liked as all his reviews award 5-star rating to the product being judged. The six products reviewed by the outgoing Amazon CEO range from non-fiction books to a bottle of milk. For these reviews, Bezos had revived 546 helpful votes.

Here are the six reviewed written by Jeff Bezos between 2000 and 2006: The oldest review written by Jeff Bezos is for the 1997 Academy Award-winning film 'Life is Beautiful. Bezos had posted this review on March 17, 2000.  Giving five stars to the Italian film he wrote, "This movie is absolutely all it's cracked up to be. Hysterically funny and simultaneously a tear jerker -- it's ultimately very uplifting. The cinematography is also fantastic -- amazing use of color".

"The DVD has dubbed English as an option, but I strongly recommend going with the subtitles instead so you can hear Benigni's amazing acting and passion. Too bad the DVD doesn't include any deleted scenes. With Benigni, I think it would be particularly fun to see out-takes." he added. 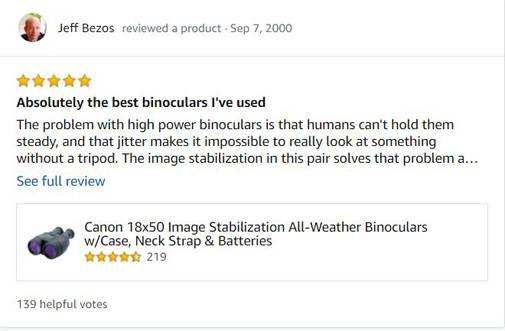 Jeff Bezos reviewed 'Canon 18x50 Image Stabilization All-Weather Binoculars' on September 7, 2000. Giving the product five stars he termed the binoculars the best he has ever used. He wrote, "The problem with high power binoculars is that humans can't hold them steady, and that jitter makes it impossible to really look at something without a tripod.

"The image stabilization in this pair solves that problem and holds things rock steady. This is an expensive product that clearly distinguishes itself, and one of those products that technology makes seem a little magic.

I have only two small complaints: First, for a product this expensive they should pre-install the neck strap for you -- not a big deal, but it would be nice for the customer. Second, I wish the lens cap covers were higher quality and attachable to the unit so they wouldn't get lost. Again, not a big deal. These are without a doubt the best binoculars I've ever used," he wrote.

'The Proving Ground: The Inside Story of the 1998 Sydney to Hobart Race' 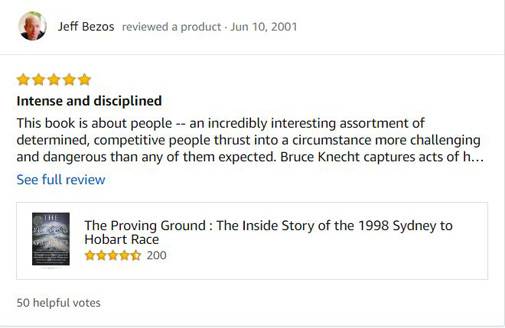 Bezos's next review was posted on June 1, 2020. Giving the non-fiction book five stars, Bezos wrote, "This book is about people - an incredibly interesting assortment of determined, competitive people thrust into a circumstance more challenging and dangerous than any of them expected.

"Bruce Knecht captures acts of heroism and frailty, but, in a display of astonishing writerly discipline, he never judges these people. Judging these strong people would inevitably over-simplify the reality of human behavior under life-threatening stress. The way Knecht does it, as we read, we get to wonder how we would react."

'Project Orion: The True Story of the Atomic Spaceship' Jeff Bezos's next review came almost a year later on April 14, 2002. Reviewing the book about a spaceship propelled by nuclear bomb explosions, Bezos wrote, "For those of us who dream of visiting the outer planets, seeing Saturn's rings up close without the intermediation of telescopes or charge-coupled devices, well, we pretty much *have* to read "Project Orion."

"In 1958, some of the world's smartest people, including famous physicist Freeman Dyson (the author's father), expected to visit the outer planets in "Orion," a nuclear-bomb propelled ship big enough and powerful enough to seat its passengers in lazy-boy recliners. They expected to start their grand tour by 1970. This was not pie-in-the-sky optimism; they had strong technical reasons for believing they could do it. To pull this book together, George Dyson did an astonishing amount of research into this still largely classified project. And, maybe because he's connected to Orion through his father, the author captures the strong emotion of the project and the team. Highly recommended."

'Down and Out in the Magic Kingdom' 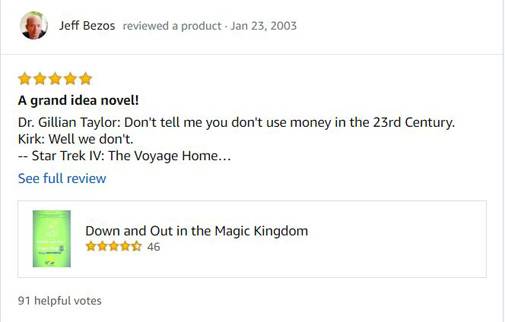 On January 23, 2003, Jeff Bezos posted the review for the science fiction book 'Down and Out in the Magic Kingdom' set in a 22nd Century Walt Disney World. Bezos started the review with a quote from Star Trek he wrote, "Dr. Gillian Taylor: Don't tell me you don't use money in the 23rd Century. Kirk: Well we don't. -- Star Trek IV: The Voyage Home".

He added, "Star Trek may be a money-free universe, but they've always left blank the details of how scarce assets like a starship or a Picasso ... or the Haunted Mansion might get allocated.

In this fun, fast book, the clearly talented Cory Doctorow explores a full-on reputation economy. With the help of a sophisticated, real-time network, people accumulate and lose a reputation currency called "whuffie." The ideas are an incredibly rich playground, and the author doesn't make you suffer through flat characters or clunky prose to get to them. On the contrary, these are totally alive characters set in a deeply conjured world (which world is Disney World, a place you can feel the author's passion for). By the end, you'll know the characters well enough to be able to judge what impact this new world has -- or doesn't have -- on the fundamentals of human nature.

Cory Doctorow deserves much whuffie for this novel. Highly recommended." 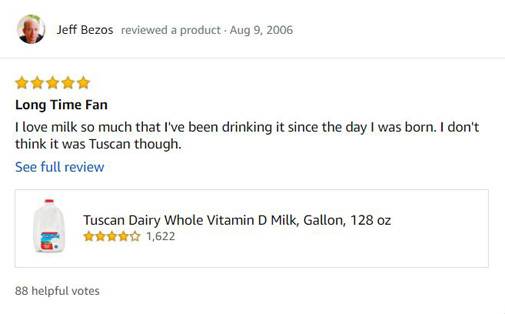 Jeff Bezos last review came three years later on August 9, 2006. This was the shortest and strangest review posted by the Amazon founder. He wrote, "I love milk so much that I've been drinking it since the day I was born. I don't think it was Tuscan though".