Corporate India has seen a substantial decline in tax litigations of late, helping government unlock revenues. Once annual compliances are streamlined and new law settles in, there could be a flurry of proceedings, which would lead to an increase in disputes 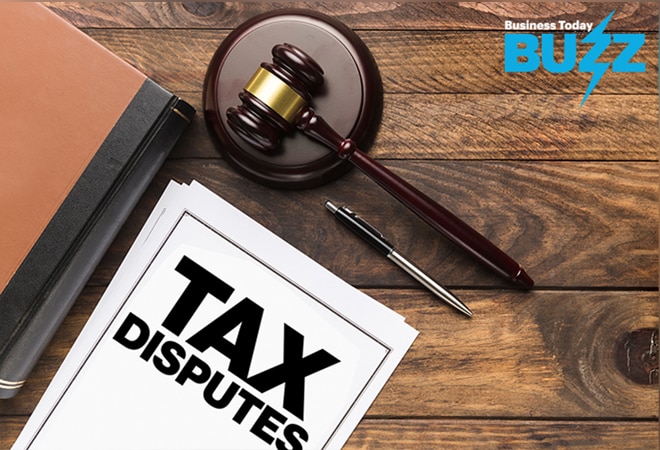 It is not unusual for businesses to find themselves locked in a dispute with tax authorities for years given India's low compliance track record and slow pace on resolution. However, there seems to be some notable progress on these fronts. Corporate India has seen a substantial decline in tax litigations of late, helping the government unlock revenues.

Disputed taxes of a little over 1,000 BSE-listed companies saw a year-on-year (y-o-y) growth of 1.5 per cent in 2019/20. It had increased 5.3 per cent and 7.8 per cent in the previous two fiscals. This respite comes after taxes related to income, sales and excise locked up in such disputes rising to a massive 42 per cent by the end of 2015/16. Companies usually disclose the amount stuck in these disputes under contingent liabilities owing to their uncertainty of outcomes.

Interestingly, the contingent liabilities, which is the possible obligation that arises from past events, and may or may not result in actual cash outgo, of these companies grew at 6.3 per cent in 2019/20, against a 11.2 per cent rise in 2018/19. However, this deceleration was not necessarily on account of lower disputed tax demands as their share in overall contingent liabilities marginally dropped to 2.1 per cent from 2.2 per cent, during the period. 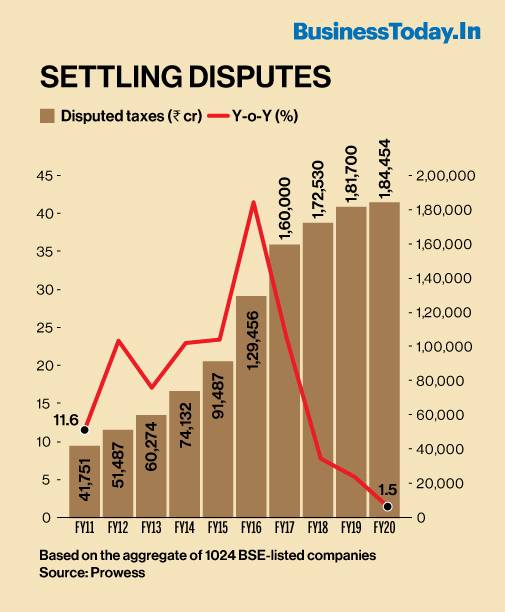 Experts attribute the reduction in contingent tax liabilities in India to the government's efforts towards improving the dispute resolution mechanism. "A reduction in growth reported in contingent tax liabilities is a clear indication of more certainty in outcomes of tax litigations. Tax laws have been simplified over the years, resulting in greater clarity, which led to companies adopting a position that is less litigious," says Pranay Bhatia, Partner and Leader, Tax & Regulatory Services, BDO India.

"The measures include setting up of a 'high-pitched scrutiny assessment committee' that taxpayers could approach directly, substantial increase in monetary threshold of tax effect below which appeals cannot be filed by the department, performance credits to tax officers to encourage them to pass 'quality' appellate orders and so on," says Rajeshree Sabnavis, Founder, Rajeshree Sabnavis & Associates, a boutique tax consultancy firm. Several amnesty schemes, including Sabka Vishwas Scheme and Vivad se Vishwas Scheme, have also been rolled out and are being strongly monitored, she adds.

Sabka Vishwas (Legacy Dispute Resolution Scheme, 2019) was introduced in Budget 2019 for resolving pre-GST tax issues, while Vivad se Vishwas Scheme was introduced in Budget 2020 for direct tax matters. Around 49,534 cases were settled under the Sabka Vishwas schemes (as on February 5, 2020), involving Rs 24,970 crore. The government has provided extended registration timelines under both schemes for taxpayers.

"Amnesty schemes introduced by the government are targeted at reducing ongoing litigations and closing pending ones. Introduction of Sabka Vishwas and subsequent Vivad se Vishwas schemes are steps in this direction. Several state governments have always been proactive in introducing amnesty schemes from time to time in order to settle pending state dues at concessional rates," says Gunjan Prabhakaran, Partner and Leader, Indirect Tax, BDO India.

"These schemes are envisaged to settle pending disputes by offering a waiver of interest and penalty and providing the benefit of reduction in taxes in certain cases. This not only helps them in keeping a check on the quantum of cases under dispute, but also augments collection of tax dues from taxpayers," she adds.

While litigations in some traditional sectors have settled down, domestic laws are still evolving to adapt to the nuances of the services sector. A look at the sectoral spread reveals that information technology (IT), which leads with a share of 17 per cent in total disputed taxes, has seen a substantial growth of 31 per cent last fiscal, while other sectors such as iron and steel, auto and banking saw a single-digit rise of 1-9 per cent. Tax disputes in sectors such as capital goods and power have seen a decline of over 45 per cent in FY20, against the year-ago.

The services sector is now witnessing the sunset of a number of tax holiday provisions from an income tax perspective. Since manufacturing and other sectors have already completed their tax holidays, the issues in these industries are more or less settled with judicial pronouncements or clarification issued by administrators, says Bhatia.

Adding more to the sector specific growth, Sabnavis says most of the top IT companies on the Indian index are stuck in pending tax litigation matters, which date back years. In a majority of cases, litigated issues are on account of tax incentives claimed by these IT houses under STPI, EOU or SEZ schemes.

So, prima facie India Inc's tax dispute load seems to be reducing, but not on all fronts. Among disputed taxes, the amount under sales tax declined the most - 4.2 per cent followed by a 1.5 per cent fall in excise - while disputed income tax grew 8.2 per cent in 2019/20. Prabhakaran doesn't find this unusual since excise duty and sales tax have been abolished with the introduction of the GST regime and hence the downfall in the growth rate of litigations is natural. "Since there are no new transactions undertaken under the erstwhile laws, chances of initiating new proceedings automatically reduce, thereby, leading to a decline in the growth rate of disputed taxes," she adds.

Nonetheless, the sore point still remains the rise in disputed income tax provisions. "This also represents a global pattern where indirect taxes are transactional and not subject to interpretation or structuring, but income taxes continue to be subjective and prone to litigation," says Prabhakaran. The total number of income tax appeals pending at various judicial fora has risen in the last five years at an annualised 6.2 per cent to 4.78 lakh in 2018/19.

The fall in the number of disputes (of indirect tax) looks transient since a liberal stance is adopted in initiating proceedings under the GST law. "Also, given that the GST law is still evolving with myriad interpretation issues, there is bound to be a significant increase in litigation in the years to come," warns Prabhakaran.

Once annual compliances are streamlined and the new law settles in, there would be a flurry of proceedings initiated by the authorities, which would lead to an increase in disputes. However, due to the widespread adoption of technology in taxation and the growing inclination towards faceless assessments, tax disputes will gradually decline in the long-term, Prabhakaran adds.