Frontier Markets, through its network of 10,000 rural women entrepreneurs across Uttar Pradesh, Rajasthan and Bihar, has connected with over 3.5 lakh households and sold over 2 million products 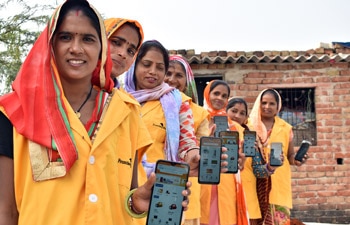 Hindustan Unilever's Project Shakti, which enables rural women (Shakti Ammas) to achieve financial independence by distributing its FMCG products, is well known. Just like the Shakti Ammas (who for several rural households are an important touchpoint for their daily consumption needs), last mile delivery start-up, Frontier Markets, is also empowering women in rural India to do last mile deliveries. The "Saral Jeevan Sahelis", as they are referred to, don't supply soaps and detergents; they are the last mile suppliers of consumer appliances and durables such as refrigerators, TV panels, washing machines, mixer-grinders and smart phones. So, if a farmer living in a far-flung village in Uttar Pradesh or Rajasthan, wishes to buy a refrigerator, the easiest way for him to do so is to reach out to a Saheli in his village.

Ajaita Shah, Founder and CEO, Frontier Markets, says that there was a clear gap in the market. "What we recognised was that the rural consumers did know about durable brands, they were also interested in buying them, they had the money too. It is the product companies and the suppliers who didn't have the right kind of distribution infrastructure to reach out to these consumers. The consumer, on the other hand, had to travel 30-50 kilometres to get to a nearby town to by a TV or a refrigerator."

Frontier Markets, through its network of 10,000 rural women entrepreneurs across Uttar Pradesh, Rajasthan and Bihar, has connected with over 3.5 lakh households and sold over 2 million products. "These women on an average earn anywhere between Rs 45,000 and Rs 65,000 a year," claims Shah.

The last mile delivery services onboards these women entrepreneurs by partnering with local self-help groups and NGOs. "The Sahelis are given a voice-enabled Saheli app which they can download on their phones. The uniqueness of the app is that it is designed for rural women. It's vernacular, it's voice-enabled. She uses the app to run her business, but we work with her physically and train her to become a 'Saheli'," Shah further explains.

Frontier Markets was launched in 2011 and till about 2015, it was a rural last mile delivery solutions provider that mostly employed men. It was in 2015 that the company decided to employ only women. Shah says that in rural India, though the final purchase of an appliance is made by the man of the house, 70 per cent of the users of the products are women. Therefore, it was important to strike the chord with the lady of the house.

"We realised that we needed to bring women into our business, as it is always easier for a woman to enter a house. They are trust builders, men aren't. We said that we had to shift and actually bring women into the value chain, because it's smart business," says Shah.

Though consumer durable and appliances distribution is at the core of Frontier Markets' strategy, the company during the COVID-19 lockdown also partnered with FMCG companies such as HUL and P&G. It also added fintech services and 4G top-ups.

Shah claims that the Rs 50 crore company has been growing exponentially in the past few years. Her ambition is to widen her network to 200,000 Sahelis in the next couple of years and widen her services to insurance products, agri-products and financial services.

SEBI extends deadline for comments on proposal on appointment of MDs