A day after entering the $100 billion m-cap club, RIL stock continued its rally on Friday to breach the 7 lakh crore market valuation. 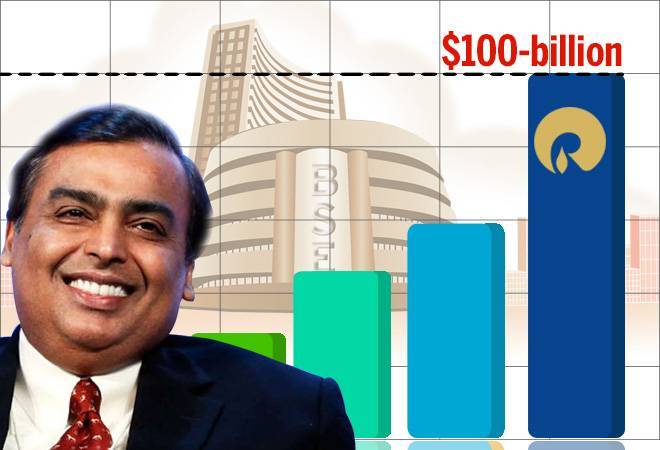 A day after entering the $100 billion m-cap club, Reliance Industries' stock continued its rally on Friday to breach the 7 lakh crore market valuation. The RIL stock surged past the 1,100 mark to hit an all-time high of 1107.25 level taking the market capitalisation of Mukesh Ambani-owned conglomerate to Rs 7,01,404 crore (over $102 billion) on BSE. RIL has become the second company in the country to achieve this feat after TCS.

It is not for the first time that Mukesh Ambani-led Reliance Industries (RIL) has crossed the $100 billion valuation mark. The m-cap of oil-to-telecom conglomerate had last scaled this milestone in October 2007 when the rupee was valued at 39.5 against the dollar.

"In every phase of our growth our mantra has been simple - set up a firm foundation. Then change the rules of the game. Then change the game itself," Ambani had told India Today in 2007. With the launch of Reliance Jio, one can safely say that the prophetic mantra RIL Chairman adhered to has helped the company catapult to Rs 6,88,766 crore valuation.

Ambani, who took over the reins of the company his father founded, had also told India Today that RIL is always known for "making paradigm and disruptive changes" in the market place. It's costly bet on Jio is a testimony to the disruption that telecom sector in the country has undergone in the last two years.

The mammoth aspirations of Reliance date back to a time when Dhirubhai Ambani returned to India from Yemen in 1957 to start a yarn trading business from a small 500 sq.ft. office in Masjid Bunder area of Mumbai. Dhirubhai's first company was called Reliance Commercial Corporation.

In 1960s, Dhirubhai and his cousin Champaklal Damani co-founded Reliance Commercial Corporation which ran a polyester business. In 1965, the partnership ended but Dhirubhai continued the business. Vimal, the first brand from Reliance, founded in 1966 at Naroda in Gujarat, became a household name.

In 1977, when it was difficult to raise capital, Reliance Textile Industries' IPO created history by introducing the equity cult in India. The issue was oversubscribed seven times.

Following Dhirubhai Ambani's death in 2002, Mukesh Ambani became chairman and managing director of Reliance Industries Ltd and Anil Ambani was made vice-chairman. The market-capitalisation of the undivided Reliance Industries stood at Rs 28,598.97 crore.

In 2002, the site Dhirubhai-6 (D6) block in Krishna-Godavari basin is where Reliance Industries Ltd (RIL) made the biggest gas discovery in India and started production of crude oil in May 2008 and natural gas in April 2009.

In 2002, Reliance enters the Infocomm business

In 2004, Reliance emerges as the first and only private Indian organisation to be listed in the Fortune Global 500 list. Reliance is also the first private sector company to be rated by international credit rating agencies - including Moody's, Standard and Poor's. Also, the feud between the brothers becomes public.

In 2005, family reached a settlement to split the Reliance group in a deal brokered by their homemaker mother, Kokilaben.

In 2009, Reliance commences production of hydrocarbons in its KGD6 block - against all odds - in just over two years of its discovery, making it the world's fastest green-field deepwater oil development project. With this development, Reliance completes an unprecedented backward integration journey.

In 2014, Reliance Retail becomes the largest retailer by revenue.

In 2016, Mukesh Ambani announces the launch of Reliance Jio, which upended the mobile data tariffs in the country.

In 2017, 170 days after its launch, Reliance Jio crossed 100 million subscribers mark. RIL Chairman launches JioPhone at 40th AGM of RIL. Ambani sets a target of 30 per cent growth each year over the next decade for Reliance Retail, which is expanding in rural and semi-urban markets. That is expected to take Reliance Retail to a revenue of Rs 4.65 lakh crore by 2027, which is not an easy task.

In 2018, RIL along with its joint venture partners BP Plc and Niko Resources announced Rs 40,000 crore investment in oil and gas exploration and production. It roped in British giant BP Plc by offering 30 per cent stake in all of its hydrocarbon assets in a $7-billion deal in 2011 to arrest the production slide. However, BP also failed to increase the production, which stands at 5 million standard cubic metres a day (mscmd) now vis-a-vis its peak of 60 mscmd in 2010.

Industrial output slips to 7-month low of 3.2% in May over sluggish manufacturing, power activity