Videocon's total debt has grown over 30% in last 3 years

The company's consolidated losses widened to Rs 7,474 crore during 2018-19 compared to a loss of Rs 6,554 crore a year ago. "The company and its three subsidiaries namely VTL, EDSL and VOVL have been referred to National Company Law Tribunal under the Insolvency and Bankruptcy Code, 2016, and there are persistent severe strains on the working capital and there is considerable decline in level of operations of the Company and net worth of the Company as on the reporting date is negative and it continues to incur losses," the company said in its regulatory filing. Since September, Videocon's business and assets are being managed by resolution professional Abhijit Guhathakurta.

The entity has been posting continuous losses (consolidated) for the past four fiscal years and with this, its aggregate losses stood at Rs 19,074 crore. It has switched to March ending accounting period since 2017. It has reported a loss of Rs 2,834 crore in the 15-month period. Although, the company has been registering losses since December 2010, it recorded profits of Rs 4,966 crore for 18 months ending December 2014. 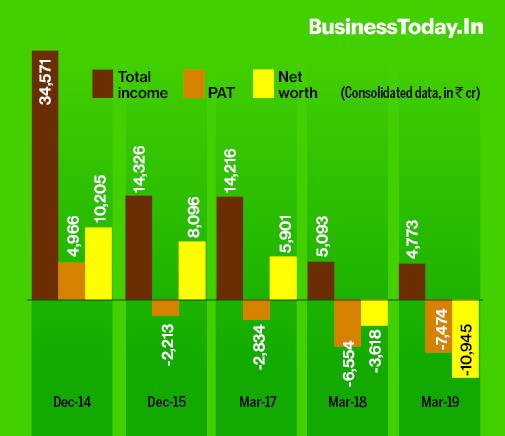 During the last three years, Videocon's total debt that includes both the long-term and short term debt has grown over 30 per cent from Rs 44,827 crore to Rs 58,574 crore.  The company has received invocation notices of corporate guarantees given by it. The personal guarantees of promoter directors have also been invoked. With a paltry cash and bank balance of Rs 521 crore at the end of March 2019 - from an all-time high of Rs 6,155 crore in December 2014 - the situation turned bad to worse.

The company has been under the Corporate Insolvency Resolution Process by NCLT since June 2018 and the stock has shed around 75 per cent of its value since then. It touched an all-time low of Rs 1.2 on August 27, 2019. Once a favourite of foreign portfolio investors (FPIs) with a holding of 7.3 per cent in December 2016, the troubled entity soon lost favour as FPIs gradually offloaded the scrip and their current holdings in the stock are less than a per cent, at 0.84 as on September 2019.