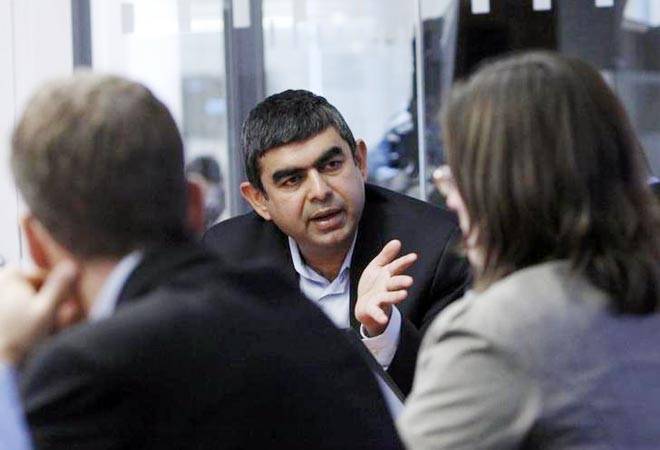 Infosys chief executive Vishal Sikka's high salary, which had prompted the founder members to voice concerns, has dropped over 67 per cent in 2016-17 on lower bonus payout.

Also read: Infosys to ramp up local hiring in US amid visa concerns

He also received restricted stock units worth $2 million, same as the previous year, and performance based stock incentives of $2.88 million (nil last year). The remuneration of Sikka for last fiscal remains 283.07 times higher than the median remuneration of employees (MRE) of Infosys.

The MRE of Infosys for FY17 stood at Rs 5,65,585. According to the annual report, while the total compensation of Sikka has fallen other senior executives witnessed a rise.

Chief Operating Officer UB Pravin Rao's total salary increased to Rs 11.80 crore in FY17 from Rs 8.14 crore in the previous year. Likewise, compensation of deputy chief operating officer, Ravi Kumar S, went up to Rs 14.87 crore from Rs 8.27 crore. Last month, Infosys founder NR Narayana Murthy, who had previously questioned the principles on which the Board was paying a high salary to Sikka, had expressed anger over the steep hike in compensation to COO Rao.

In the letter to shareholders, Sikka said the best and most talented employees want to be measured on performance -not role maturity or tenure. So in fiscal 2017, stock incentives plan for top performers was introduced.

"It has been my personal endeavour since joining Infosys to enable all employees to share in the successes of the company, and in fiscal 2017, we made the first step of this a reality. In addition, we restructured the compensation of senior leaders to be more performance-based, with a significant portion of their compensation now coming through stock incentives, creating a more direct alignment with the interest shareholders," he wrote.

Non-executive chairman R Seshasayee got Rs 1.95 crore in remuneration in 2016-17 as compared to Rs 1.84 crore in the previous year. Other independent directors too got a remuneration of over Rs 1 crore.