150th Gandhi Jayanti: PM Modi is expected to announce ban on single-use plastic paving the way for India to become free of it by 2022. 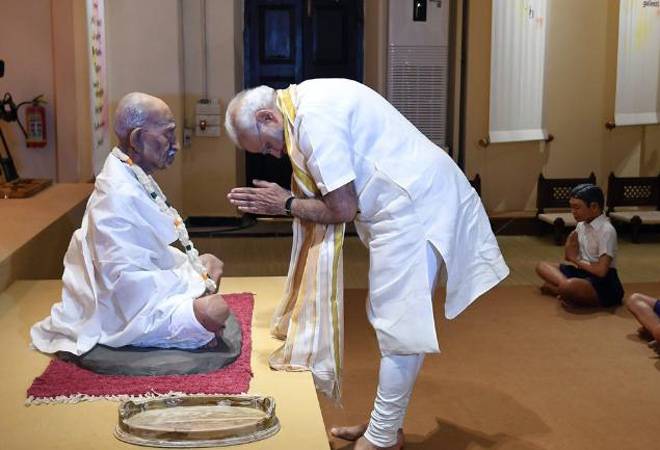 150th Gandhi Jayanti: Prime minister Narendra Modi Wednesday will declare India open defecation-free as he visits the Sabarmati Ashram in Ahmedabad on the occasion of the 150th birth anniversary of Mahatma Gandhi.

Prime Minister Narendra Modi Wednesday will declare India an open defecation-free country as he visits the Sabarmati Ashram in Ahmedabad on the occasion of the 150th birth anniversary of Mahatma Gandhi.

PM Modi began his day with a visit to Raj Ghat where he paid tributes to the Father of the Nation, followed by his visit to Vijay Ghat, the resting place of Lal Bahadur Shastri, who also shares his birthday with Gandhi.

The Prime Minister will soon go to Parliament where he will pay floral tributes to both the leaders. Next he will visit Ahmedabad later in the evening around 6 PM where he will be greeted by the BJP workers at a function organised the party's city unit, Gujarat BJP president Jitu Vaghani told PTI. PM Modi will then visit the Sabarmati Ashram to pay homage to Gandhi.

From Sabarmati Ashram, PM Modi will go to the Sabarmati riverfront where he will declare the country open defecation-free (ODF) in the presence of over 20,000 village heads, added Vaghani. People associated with Gandhian institutions, high court judges, Padma awardees, students, educationists and village-level sanitation workers have been invited for the function.

"Modi will also attend the state-level Navratri festival organised at the city's GMDC ground. He will spend some time at the Garba ground before leaving for Delhi," Vaghani said.

People visiting Gujarat to attend the October 2 function at Sabarmati riverfront will be taken to different places associated with Mahatma Gandhi, including the Dandi memorial, which is associated with the historic salt march led by him in 1930 and the Mahatma Mandir in Gandhinagar.

Several events have also been organised in the city and other parts of Gujarat on Wednesday as part of the sesquicentennial year of Gandhi's birth anniversary. The administration of Navsari district, where Dandi is located, has organised a mega cleanliness drive at the Dandi beach, where Gandhi made salt as part of a civil disobedience movement, known as the 'Salt Satyagrah'. Navsari collector Ardra Agarwal said around 1,500 people are likely to join the drive to clean the Dandi beach.

The Congress, meanwhile, will celebrate the occasion by organising 'padayatras' across the country, with party leader Rahul Gandhi joining the foot march in Delhi that will be led by interim President Sonia Gandhi.