24 patients die in Nashik hospital after oxygen leak from tanker

"People died because the pressure reduced due to the leak in the oxygen tank which is provided by a private company," said Nashik Collector Suraj Mandhare 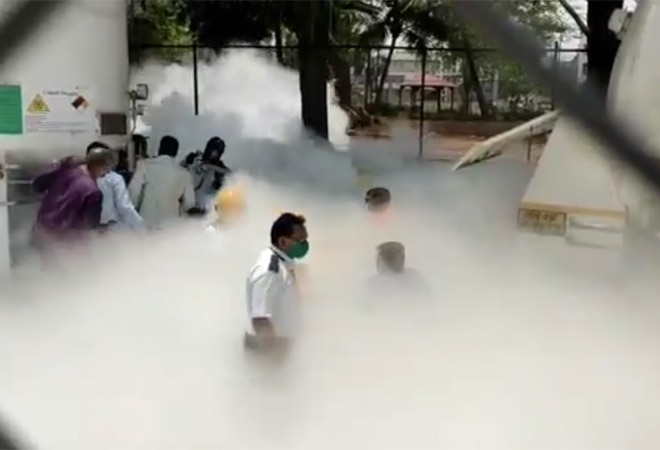 As many as 24 patients died after oxygen leaked from a tanker at a hospital in Maharashtra. Around 171 patients were present at the Zakir Hussain Hospital in Nashik on Wednesday when the incident took place. The oxygen supply was cut for around 30 minutes due to which the deaths took place.

Kailash Jadhav, Commissioner, Nashik Municipal Corporation, said that the people died after oxygen was stopped. "People died because the pressure reduced due to the leak in the oxygen tank which is provided by a private company. That company looks after the maintenance of this tank," Nashik Collector Suraj Mandhare said.

Maharashtra Minister Rajesh Tope said that the leakage has been brought under control. Other patients have been moved to different hospitals.

"It's an unfortunate incident. We're trying to get a detailed report. We've ordered an inquiry as well. Those who are responsible will not be spared," FDA Minister Dr Rajendra Shingane said

Visuals from the hospital show gas rapidly leaking from the tanker. The area can be seen covered in white fumes. The gas leak caused widespread panic. Fire trucks were rushed to the spot to stop the leakage.

Bharatiya Janata Party (BJP) leader and former chief minister Devendra Fadnavis said, "I demand that the other patients be helped and shifted if needed. We demand a detailed inquiry."