Medical oxygen, a crucial resource in treating critically-ill coronavirus patients, has been in short supply with the second wave of the pandemic resulting in tremendously high demand across the country 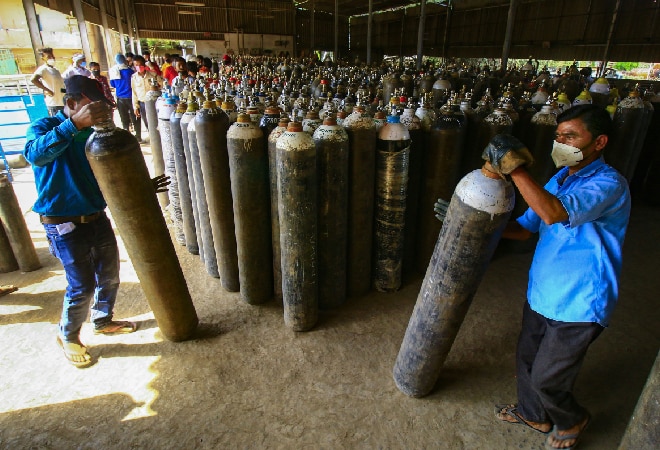 India sold twice as much oxygen to the world during the first ten months of fiscal 2020-21 as compared to entire financial year before it, shows data from Department of Commerce. This happened despite the fact that India was one of the three worst-affected nations from the coronavirus pandemic for a substantial portion of this period.

Medical oxygen, a crucial resource in treating critically-ill coronavirus patients, has been in short supply with the second wave of the pandemic resulting in tremendously high demand across the country. On Tuesday, Delhi Chief Minister Arvind Kejriwal informed that certain hospitals only have medical oxygen only sufficient for a few hours left in their reserves. Similar crisis exists in other parts of the nation too. Maharashtra, which accounts for almost 60 per cent of COVID-19 cases in India, had requested Centre to provide more medical oxygen as the rapidly increasing number of patients in need of the commodity was depleting the reserves fast. On April 19, several cryogenic tankers aboard the Indian Railways' 'Oxygen Express' were dispatched to industrial areas in different parts of the country to receive and ferry liquid oxygen to the state.

Gujarat, Madhya Pradesh, Uttar Pradesh and several other regions are suffering from an identical conundrum. Patients are struggling to find oxygen as government rush to arrange the same.

On April 18, central government ordered that supply of oxygen to industries, barring a few, should be diverted to the hospitals. Empowered Group-II (EG-II), headed by Secretary, Department for Promotion of Industry and Internal Trade (DPIIT), has recommended restricting oxygen supply to manufacturers. The recommendation comes into effect on April 22.

In its order, the ED-II noted that the demand for medical oxygen is already at 60 per cent of production capacity and is more than likely to go up in days to come.

Several companies, like Reliance Industries, SAIL, Tata Steel and ArcelorMittal Nippon Steel India have already volunteered to supply oxygen from their facilities for life-saving purposes. According to the steel ministry, 28 oxygen plants located in the steel facility of both public and private sectors are supplying about 1,500 tonnes of medical oxygen every day. Also, an additional stock of 30,000 MT, including the safety stock, is being made available for medical use.

There are also plans to set up 162 pressure swing adsorption (PSA) oxygen plants in public health facilities. These will augment medical oxygen capacity by 154.19 MT.