The court has allowed Ratul Puri to carry his medicines along with him to jail, subject to the opinion of the jail doctor. The judge also asked the jail superintendent to consider Puri's request to provide orthopaedic mattress as per prison rules 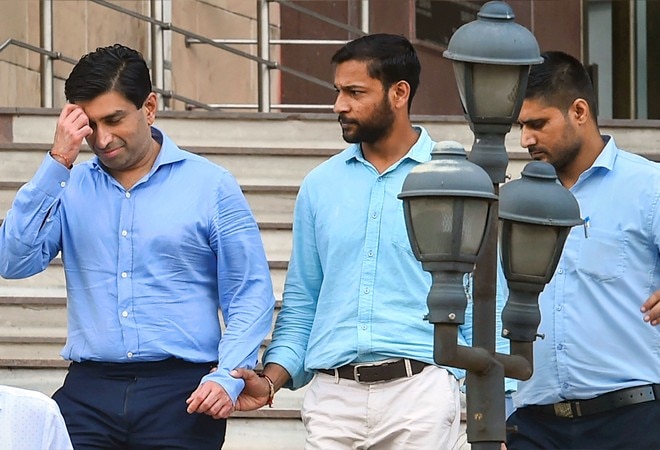 Ratul Puri has been allowed to carry his medicines with him, and his request for an orthopaedic mattress has been conveyed to the jail superintendent. File photo/PTI

Delhi's Rouse Avenue Court has sent Ratul Puri, nephew of Madhya Pradesh Chief Minister Kamal Nath, to judicial custody till October 1 in a money laundering case related to the AgustaWestland chopper scam. He will be lodged in Tihar jail during the term of his judicial custody.

Pronouncing the judgement, special judge Arvind Kumar allowed Puri to take his medicines along with him to jail. The jail doctor will take the final call on the matter, though. The judge also asked the jail superintendent to consider Puri's request to provide orthopaedic mattress as per prison rules. The court also asked the lock up in-charge to ensure security and safety of Puri while taking him to Tihar jail.

On September 16, the Delhi court had extended ED custody of Puri for three days. He was arrested by the probe agency on September 4.

The money laundering case was lodged following alleged irregularities in purchase of 12 VVIP choppers from Italy-based Finmeccanica's British subsidiary, AgustaWestland. Puri has been accused of benefiting from the purported kickbacks generated in the Rs 3,600 crore VVIP choppers deal case. The deal was cancelled by the Centre in 2014.

Puri was earlier arrested under the Prevention of Money Laundering Act (PMLA) in the bank fraud case after he appeared before the central probe agency in the chopper scam.

The latest PMLA case emerged from a CBI FIR on August 17, where Ratul Puri, his father Deepak Puri, mother Nita (Nath's sister) and others were booked in connection with a Rs 354 crore bank fraud case filed by the Central Bank of India.