Antilia bomb scare case: The NIA asked Vaze to walk near the spot where the explosive-laden SUV was found 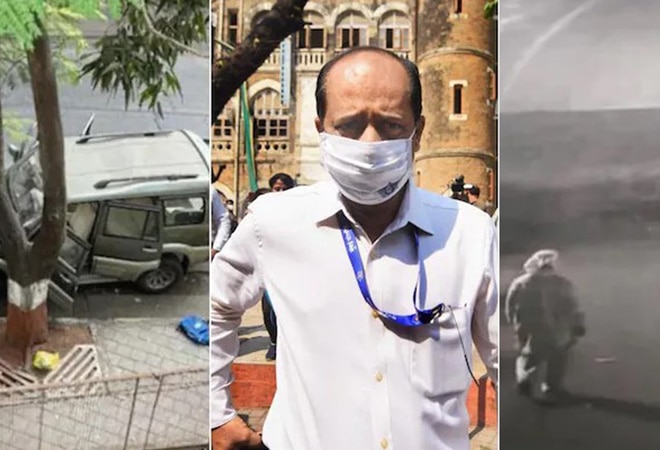 Few days after Hiren's body was found, the case was transferred to the central anti-terror agency NIA

Encounter specialist of the 90s and now an arrested Mumbai Police cop Sachin Vaze was brought to spot outside Antilia, the residence of India's richest businessman Mukesh Ambani to recreate the crime scene, by the National Investigation Agency (NIA) as part of the ongoing investigation of the case of a car laden with explosives discovered near Antilia.

The NIA asked Vaze to walk near the spot where the explosive-laden SUV was found. First, they made him walk in shirt and pants and then in a kurta and a handkerchief wrapped around his head to reconstruct the sequence of events that might have taken place on February 25.

The central agency has found some important evidence in the case as it claims the number plate of the abandoned car was found in one of the SUVs that Vaze was using. It added the person spotted in the CCTV footage near Ambani's residence was the former Mumbai police officer. The NIA further added fingerprints on the SUV matched with Vaze's fingerprints and that he was the one using a Toyota Innova, which was right behind the Scorpio car.

A Scorpio car containing 20 gelatin sticks and a threat letter addressed to Ambani and his wife Nita Ambani was found outside the residence of Reliance Industries chairman Mukesh Ambani. Several cops including suspended assistant police inspector (API) Sachin Vaze reached the spot upon receiving the information and Vaze took over as the leading investigator in this case.

After the police investigation in the case, the Scorpio was traced back to a Thane-based businessman Mansukh Hiren, who filed a stolen vehicle complaint with the police on February 17. Hiren was found dead on March 5 in a creek near Thane.

Hiren's wife Vimla Hiren had alleged Sachin Vaze, the lead investigator in the case, used this car for four months and returned it on February 5. She also alleged Vaze's role in her husband's death. Former Maharashtra Chief Minister and Leader of Opposition in the state assembly, Devendra Fadnavis also raised questions on Sachin Vaze's role in the case and claimed the now-arrested cop knew Hiren before this incident took place.

Few days after Hiren's body was found,  the case was transferred to the central anti-terror agency NIA and Sachin Vaze was arrested by the agency after 12 hours of questioning on March 13.