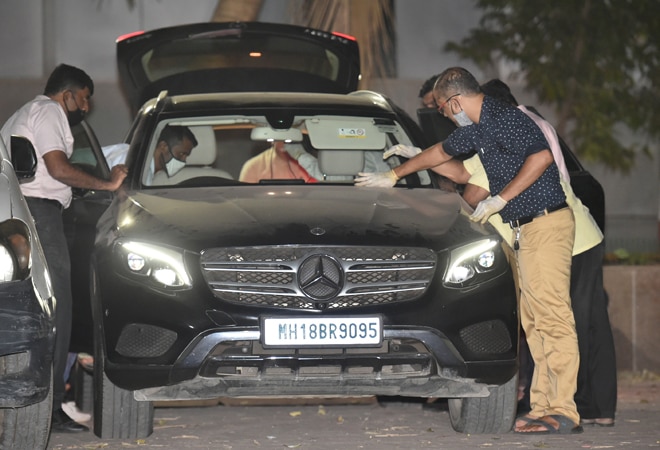 NIA officers investigate Sachin Vaze's Mercedes car following his arrest, in connection with a probe into the recovery of explosives from a car parked near industrialist Mukesh Ambani's house, in Mumbai.

After seizing the Mercedes, the anti-terror agency said it has recovered Rs 5 lakh cash, a note counting machine, and licence plate of the SUV from the car, along with some clothes.

"NIA today seized a black Mercedes-Benz car. We have recovered the number plate that was on the Scorpio car, over Rs 5 Lakh in cash, a note-counting machine, and some clothes...Sachin Waze used to drive this car... the ownership of the car is under investigation," senior NIA officer Anil Shukla told reporters.

A Scorpio SUV with explosives was found near Mukesh Ambani's residential building - Antilia on February 25. The SUV also carried a threat note to him and his wife Nita Ambani.

Later, after the police probe, the SUV was traced to a Thane-based auto part dealer Mansukh Hiran, who had filed a stolen report with the police on February 17.

But on March 5, Hiran was found dead in a creek near Mumbai. Hiren's wife alleged that Sachin Vaze, the first investigating officer in the bomb scare case, had used the car for four months and returned it on February 5. She also accused Vaze of having a role in her husband's death.

Vaze, who was the crime branch's Assistant Police Inspector, has been transferred to the Citizen Facilitation Centre (CFC) unit of the Mumbai police.

Later, when the NIA took over the case from the Mumbai Anti-Terrorism Squad, the agency arrested Vaze for placing the SUV near Ambani's residence.

The agency alleged that Vaze seized CCTV footage from his own apartment complex and erased it. It searched his office and seized his computer-tablet, laptop, and some mobile phones.

Amid the probe in the Ambani's bomb scare case, a political tussle has erupted between the ruling party of Maharashtra and the Bharatiya Janata Party (BJP).

Fadnavis alleged that Vaze seemed to have some sensitive information "that would shake or break this government, unlike former forest minister Sanjay Rathod" and that was why Vaze was being shielded.

Forest minister Sanjay Rathod resigned last month after his name was linked to the alleged suicide of a woman in Pune.

On the other hand, CM Thackeray said the guilty in the Mansukh Hiran death case will be punished, but police officer Vaze should not be targeted until his alleged involvement is established.

"Sachin Vaze is not Osama Bin Laden. It is not right to target a person and hang him and then investigate," Thackeray said.