NIA and Maharashtra ATS, which are probing three cases related to the Ambani bomb scare case, have found the video footage that reveals both were together on February 17. On the same day, Hiren had reported to police that his SUV had stolen 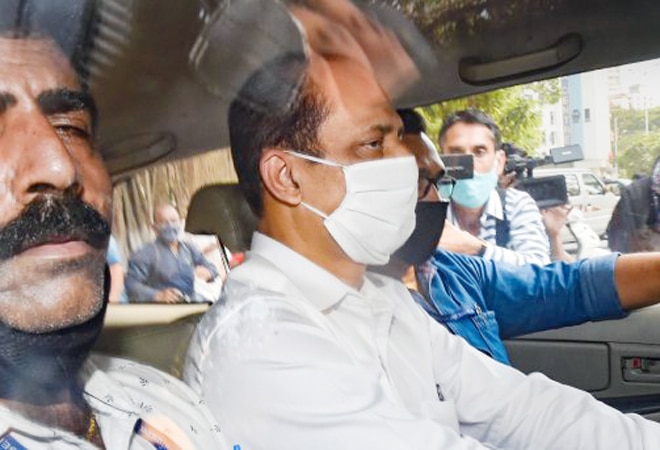 Investigators have also come to know about Vaze's three major business associations, which are being probed

The probe agencies appear to have zeroed in on shunted Mumbai cop Sachin Vaze as they have got hold of a conclusive video of him and Mansukh Hiren together, which establishes the fact that Vaze was in contact with Hiren. The National Investigation Agency (NIA) and the Maharashtra Anti-Terrorism Squad (ATS), which are probing three cases related to the Ambani bomb scare case, have found a video footage that reveals both were together on February 17. On the same day, Hiren had reported to police that his SUV had stolen.

On February 25,  an explosive-laden SUV was found on the Carmichael road near RIL Chairman Mukesh Ambani's home. The Mahindra Scorpio SUV, which belonged to Hiren, also contained a threatening letter against the Ambani family.

The February-17 footage shows Hiren meeting Vaze inside a black Mercedes-Benz, which Hiren used to drive and has now been seized, near the General Post Office. The video reveals their meeting lasted about 10 minutes.

In his statement to the police, Hiren said his SUV was stolen from Vikhroli in the central Mumbai area on February 17. Interestingly, Hiren's statements were also recorded by Vaze himself after the crime branch unit, which he was heading earlier, started probing the case.

A Thane court will hear the bail plea of Vaze today after rejecting his plea for interim relief earlier. Investigators have come to know about Vaze's three major business associations. The sleuths are trying to find out more about these three companies, where Vaze served as the director. They are also probing the role of other directors in these companies.

The companies under the scanner were incorporated during the period when Vaze was not a part of the Mumbai police. These companies are Diginext Multi-Media Limited, incorporated on September 27, 2011; Multi-build Infraprojects Limited; and Techlegal Solutions Private Limited.

A Scorpio SUV with explosives was found near Mukesh Ambani's residential building - Antilia on February 25. The SUV also carried a threat note to him and his wife Nita Ambani. Later, after the police probe, the SUV was traced to a Thane-based auto part dealer Mansukh Hiren, who had filed a stolen report with the police on February 17.

On March 5, Hiren was found dead in a creek near Mumbai. Hiren's wife alleged that Sachin Vaze, the first investigating officer in the bomb scare case, had used the car for four months and returned it on February 5. She also accused Vaze of having a role in her husband's death.