Assam NRC: People who have been excluded from the final list of NRC will have to appeal against it at Foreigners' Tribunals (FT)- a quasi-judicial court and subsequently in the high court or Supreme Court 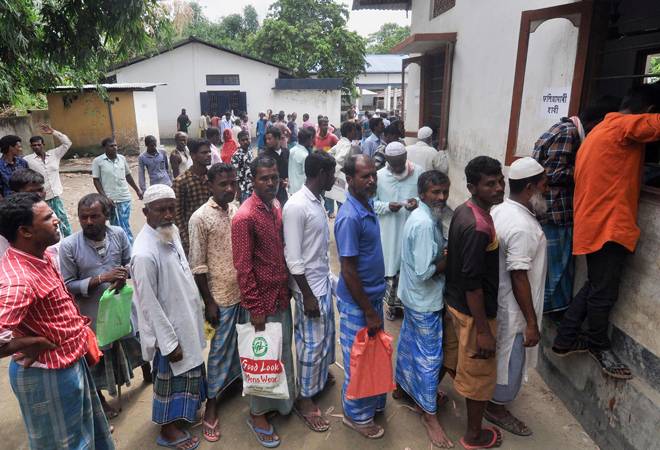 Assam NRC: People stand in a queue to check their names on the final list of the National Register of Citizens outside a Gaon Panchayat office in Pavakati village, Morigoan

The final list of people in updated National Register of Citizen (NRC) that has been published on Saturday has stripped nearly 19 lakh people in the north-eastern state of Assam of their citizenship.  In the final draft of NRC, out of 3.30 crore applicants, 31.11 crore names have been found to be eligible for inclusion in updated NRC and a total of 19.06 lakh persons were excluded.

The NRC is a list of people who can prove that they came to Assam before 24 March 1971, a day before India's neighbouring country Bangladesh declared independence from Pakistan. The first NRC was prepared in 1951 on the basis of year's census in Assam. It is the country's only state to create such a document. NRC was created to control unabated migration from Bangladesh. The state is said to have faced longstanding foreigner problem, to remove illegal migrants and arrest further inflow.

Also read: NRC final list: How and where to check your name on Assam's National Register of Citizens

What will happen to those 19 lakh people excluded from the NRC?

People who have been excluded from the final list of NRC will have to appeal against it at Foreigners' Tribunals (FT)- a quasi-judicial court and subsequently in the high court or Supreme Court.

Meanwhile, the BJP-led Assam government has already ruled out the detention of people who do not figure in the list 'in any circumstances' till the time an FT doesn't declare them foreigners. The government has given 120 days time to those excluded from the NRC to appeal in the court.

On the other hand, as per media reports, the courts in India will be burdened and get exhaustive as the appeal period is short and cases are far too many which may further clog the process. At present, there are 100 FTs in Assam and 200 more will be functional soon.

Suppose, someone who loses his or her case in a Foreigners' Tribunal as well as in higher courts, he or she will face a possible arrest and the prospect of being sent to a detention centre.

How those excluded from NRC can back up their claims for inclusion?

Those excluded from NRC will have to prove that they or their ancestors were living in Assam on or before March 24, 1971. Also, anyone who participated in the electoral rolls up to March 24, 1971, or who are descendants of any such citizens, are eligible for inclusion in the updated NRC. Besides, the original documents such as birth certificates and land records - as long as these were issued before the cutoff date, would also be admissible as a proof of citizenship.

Wouldn't those rejected have already submitted the documents to establish their linkage to March 24, 1971?

People who had submitted documents in order to establish their linkage to March 24, 1971 or earlier but still excluded from the NRC list may face an additional problem as their papers were not enough to establish this linkage. Such people face the task of finding documents other than those that were rejected.

If even legal recourse fails for the NRC excluded people, would they be deported?

If not deported or detained in a camp, such people would officially be entitled as non-citizens. Although, India has no fixed policy for "stateless" persons. The only aspect that is more or less clear here is that a "stateless" person will not have voting rights. As of now, nothing is clear about their rights to work, housing and government healthcare and education. In India, being "stateless" is not the same as being a refugee. At present, the country has refugees from Tibet, Sri Lanka (Tamils) and West Pakistan.