Balakot air strike: How much damage can 500 pound bombs cause?

Given that the Mirages were carrying a payload of 500 pound bombs, it's likely that the IAF used between 4 to 5 bombs in each of the three locations it struck across the LoC in the pre-dawn raid. While India was fast asleep, the Indian Air Force (IAF) carried out an air strike in Balakot, Muzaffarabad and Chakothi in Pakistan. Before the break of dawn, 12 Indian Air Force Mirage 2000 aircraft took off from the Gwalior airbase armed with 225 kg GBU-12 conventional laser guided bombs kitted with American-built precision guidance and destroyed Jaish-e-Mohammed's camps in Pakistan, thus avenging the Pulwama attack.

ALSO READ:Surgical Strike 2.0 Live: 'It's your turn to get ready for our surprise,' says Pakistan Army to India after IAF destroys Jaish terror camps in Balakot

Given that the Mirages were carrying a payload of 500 pound (225 kg) bombs, it's likely that the IAF used between 4 to 5 bombs in each of the three locations. So what is the kind of damage that a 225 kg bomb can cause? 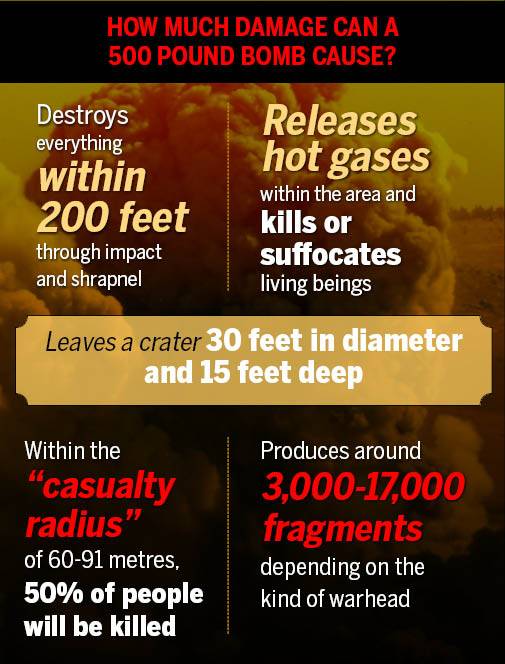 According to a research paper by two students at University of California, Berkeley, analysing the impact of US bombing on Vietnam, the crater from a general purpose bomb like the MK 82 was "typically 30 feet in diameter and 15 feet deep", but obviously varied greatly with the terrain. "Shrapnel is important over a zone about 200 feet in diameter. Simple shelters (sandbags, earthworks, even bamboo) protect against all but close hits," added the study.

The GBU-12 and other precision guided munitions had played a decisive role in the Gulf War, too. And given that it was the first war to be televised live, the world got to see exactly how Iraqi bunkers were targeted and destroyed by this family of bombs.

ALSO READ:Mirages over Balakot: Why Pakistan cannot defend its airspace