Mirages over Balakot: Why Pakistan cannot defend its airspace

The bitter truth for Islamabad is that it simply cannot afford to take on the might of the Indian armed forces. 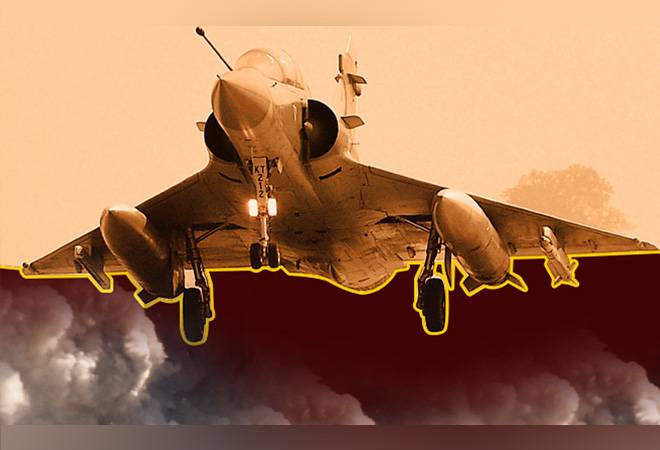 The night raid on Jaish-e-Mohammed terror camps in Balakot, Khyber-Pakthunkhwa, by the Indian Air Force has once again shattered the myth that nuclear weapons can help protect Pakistan from India's punitive actions. The bitter truth for Islamabad is that it simply cannot afford to take on the might of the Indian armed forces.

At 3:45 am on February 26, a formation of 12 Mirage-2000 fighter bombers entered Pakistan, dropped bombs on their pre-designated targets in Balakot - only a few minutes flying time from the Pakistan Military Academy in Abbotabad - and returned to their bases in India. The operation lasted 21 minutes. Balakot residents later told the BBC they heard five loud explosions. Between 300 and 350 terrorists are believed to have been killed.

The Pakistan Air Force ordered a scramble, but it was merely symbolic as pursuit would have been suicidal. The release of flares by the PAF jets during takeoff suggests the Pakistani pilots knew they were being 'painted' by enemy radar, indicating that plenty of Indian fighter aircraft were providing protective top cover to the 12 Mirages. The simultaneous presence of an IAF Embraer radar aircraft on patrol along the border also must have freaked out the Pakistani pilots, who would have experienced the fishbowl effect - the feeling of constantly being observed by the enemy.

ALSO READ:Surgical Strike 2.0 Live: 'It's your turn to get ready for our surprise,' says Pakistan Army to India after IAF destroys Jaish terror camps in Balakot

Providing top cover through combat air patrol (CAP) for the Mirages would have been either the Sukhoi Su-30MKI or the MiG-29 (NATO codename Fulcrum). Had the Pakistani jets come within striking distance of the Mirages, the Indian jets on CAP would have blasted them out of the skies via their long-range air-to-air missiles.

Balakot isn't the first time the IAF has used air power to expose Pakistan's vulnerability in a straight contest -as opposed to terror strikes in which Islamabad enjoys a huge advantage. According to a Strategy Page report, during the 1999 Kargil War and the 2002 border standoff the PAF's "psyche took a big beating" because of the IAF's aggressive deployments.

While a number of IAF aircraft took part in the Kargil campaign, it was the cover provided by the MiG-29 Fulcrum armed with beyond visual range (BVR) missiles that exposed the PAF's plight. "Analyses by Pakistani experts revealed that when the rubber met the road, PAF simply refused to play any part in support of the Pakistan Army, angering the latter," says the report.

"While PAF fighters did fly combat air patrols during the conflict, they stayed well within Pakistani air space. On occasions, IAF MiG-29s armed with the deadly R-77 BVR air-to-air missiles were able to lock on to PAF F-16s, forcing the latter to disengage. In the absence of a PAF threat, the IAF was able to deliver numerous devastating strikes on intruder positions and supply dumps."

The situation changed little during the 2002 border crisis between India and Pakistan. Strategy Page adds: "One Pakistani military expert observed that the PAF's perceived inability to defend Pakistan's airspace and even put up a token fight against the IAF was the biggest driver for Pakistani leaders' warnings that any Indian attack would lead to an immediate nuclear strike by Pakistan. It would be no exaggeration to say that after the Kargil and 2002 experiences, PAF's psyche took a big beating."

In the report "Airpower at 18,000 feet: IAF in the Kargil War" published by the Carnegie Endowment for International Peace, Benjamin Lambeth explains in detail how the IAF ground down both the Pakistan Army and the PAF: "Throughout the campaign, whenever IAF reconnaissance or ground attack operations were under way in the immediate combat zone, Western Air Command ensured that MiG-29s or other air-to-air fighters were also airborne on combat air patrol stations over the ground fighting on India's side of the LoC to provide top cover against any attempt by the PAF to enter the fray in a ground attack role. PAF F-16s to the west typically maintained a safe distance of 10 to 20 miles (16-32 km) on the Pakistani side of the LoC, although they occasionally approached as close as 8 miles (12.8 km) away from the ongoing ground engagements."

Lambeth quotes Air Marshal (retired) Vinod Patney, the then head of Western Air Command: "I think my insistence to mount CAPs across the (command's entire area of responsibility) at different heights and times to give the message that I was ready and angling for an enlarged conflict helped. It was akin to throwing a glove, but it was not picked up."

Although IAF fighters never fired at the PAF F-16s due to the Atal Bihari Vajpayee government's strict injunction that Indian forces not cross the LoC, years later Air Chief Marshal (retired) Anil Tipnis recalled he had "personally authorised his escorting fighter pilots to chase any Pakistani aircraft back across the LoC in hot pursuit were those pilots to be engaged by enemy fighters in aerial combat".

It was when an IAF reconnaissance aircraft sustained a direct hit from a Chinese made Anza shoulder-fired surface to air missile launched by Pakistani intruder, that the IAF launched Operation Vijay to clear the Himalayan peaks. On June 24, 1999, in the first-ever combat use of laser-guided bombs by the IAF, two Mirage-2000s struck and destroyed the Northern Light Infantry's command and control bunkers in Skardu in Pakistan Occupied Kashmir. According to Lambeth, "For this pivotal attack, the IAF waited until the encampment had grown to a size that rendered it strategically ripe for such targeting."

The IAF reported that it resulted in as many as 300 enemy casualties within just minutes. The Northern Light Infantry comprised nearly 2,700 soldiers and it is believed all of them perished as a result of the air strikes. Radio intercepts by Indian intelligence revealed severe shortages of rations, water, medical supplies and ammunition, as well as an inability of the occupying enemy units to evacuate their wounded, writes D.N. Ganesh in 'Indian Air Force in Action'.

The effectiveness of the IAF's operations can be measured by the fact that Pakistan's then Foreign Minister Sartaj Aziz, rushed to New Delhi on June 12, 1999 and implored the IAF to "stop its air strikes." You don't get more desperate than that.

However, the most telling statement on the war was made by India's then defence minister George Fernandes. In January 2000, he observed that in precipitating the Kargil War, Pakistan "had not absorbed the real meaning of nuclearisation - that it can deter only the use of nuclear weapons, but not all and any war".

As in Kargil, in Balakot too, the IAF seems to have given the Jaish recruits ample time to congregate in the hilly forests. The loud explosions and screams of the dying as recounted by a Khyber-Pakthunkhwa resident to the BBC is proof that the strategy worked brilliantly.

There will certainly be card carrying left liberals who will argue that attacking Pakistan will lead to nuclear war in South Asia. Indeed, ever since Pakistan acquired the atom bomb in the late 1980s, it has been quite vocal about its low nuclear threshold. However, according to Subhash Kapila, an international relations and strategic affairs analyst, Pakistan's low nuclear threshold is a myth - perpetuated and planted by Western academia and think tanks. This suits the West in whose eyes India is a long-term rival and Pakistan a useful, if unreliable, ally. Unfortunately, for decades India's political leadership, media and academia bought into this myth.

"Nuclear warfare is not a commando raid or commando operation with which Pakistan is more familiar," says Kapila. "Crossing the nuclear threshold is so fateful a decision that even strong American Presidents in the past have baulked at exercising it or the prospects of exercising it." Pakistan cannot expect India would sit idle and suffer a Pakistani nuclear strike without a massive nuclear retaliation."

Having failed to sway the current Indian political leadership with its nuclear scare tactics, and unable to match India in conventional weapons, Pakistan has very few militarily options left. For the moment, Islamabad is like a deer caught in the headlights, its stature greatly diminished.

The post-Uri surgical strike and the Balakot raid are symptomatic of a new India that has clearly jettisoned its Gandhian aversion to war and is ready to retaliate with deadly force. Other countries such as Russia (in Ukraine and Syria) and the US (in Afghanistan and Iraq) have used the full extent of their military power to defeat whom they regard as enemies. Sadly, many Indians still carry the atavistic traits of nonviolence inherited from previous generations weaned on fake secularism. Since we are dealing with an enemy that is possessed by an implacable hatred of India and is responsible for all major terror strikes in the country, disproportionate retribution is justified and necessary.

(The author is a New Zealand-based defence and foreign affairs analyst.)

Invisible, but not forgotten

The lending rates remain unchanged despite a repo rate cut