Bapu is the best teacher to guide us, PM Modi writes in The New York Times op-ed

Prime Minister Narendra Modi talks about Gandhi's methods of resistance, his thoughts on nationalism, and how the Modi government is trying to fulfil Gandhi's dreams of eliminating poverty, proper sanitation for all and harnessing renewable resources 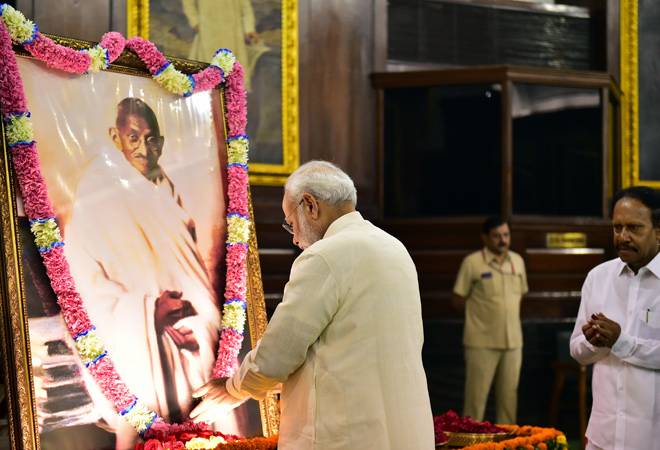 Prime Minister Narendra Modi, in an op-ed in The New York Times on Mahatma Gandhi's 150th birth anniversary, said that Bapu continues to give courage to millions globally and that he is the "best teacher to guide us". In his a detailed piece, titled 'Why India and the World Need Gandhi', PM Modi quoted Martin Luther King Jr's experience after reaching India in 1959 and said the "guiding light whose inspiration got Dr King to India was Mohandas Karamchand Gandhi".

"...Perhaps, above all, India is the land where the techniques of nonviolent social change were developed that my people have used in Montgomery, Alabama, and elsewhere throughout the American South. We have found them to be effective and sustaining - they work!" PM Modi wrote quoting Martin Luther King Jr.

PM Modi talked about Gandhi's "methods of resistance", which gave hopes to several African nations. PM Modi wrote: "Nelson Mandela referred to Gandhi as "the Sacred Warrior" and wrote, "His strategy of noncooperation, his assertion that we can be dominated only if we cooperate with our dominators, and his nonviolent resistance inspired anticolonial and antiracist movements internationally in our century (South Africa."

Quoting from Gandhi's book, Young India, PM Modi talked about Bapu's thoughts on nationalism, saying he "envisioned Indian nationalism as one that was never narrow or exclusive but one that worked for the service of humanity".

Through the op-ed, PM Modi also talked about how the BJP-led NDA government is trying to fulfil Gandhi's dreams of eliminating poverty, proper sanitation for all and harnessing renewable resources. "We in India are doing our bit. India is among the fastest when it comes to eliminating poverty. Our sanitation efforts have drawn global attention. India is also taking the lead in harnessing renewable resources through efforts like the International Solar Alliance, which has brought together several nations to leverage solar energy for a sustainable future. We want to do even more, with the world and for the world," PM Modi wrote.

Saying that Mahatma Gandhi was the best teacher, PM Modi said, "From uniting those who believe in humanity to furthering sustainable development and ensuring economic self-reliance, Gandhi offers solutions to every problem."

Citing Einstein's famous quote on Gandhi, which stated, "Generations to come will scarce believe that such a one as this ever in flesh and blood walked upon this earth", PM Modi urged the world to "ensure the ideals of Gandhi are remembered by future generations". "I invite thinkers, entrepreneurs and tech leaders to be at the forefront of spreading Gandhi's ideas through innovation," he said, adding "The world bows to you, beloved Bapu!".

What is single-use plastic, and how does it harm the environment