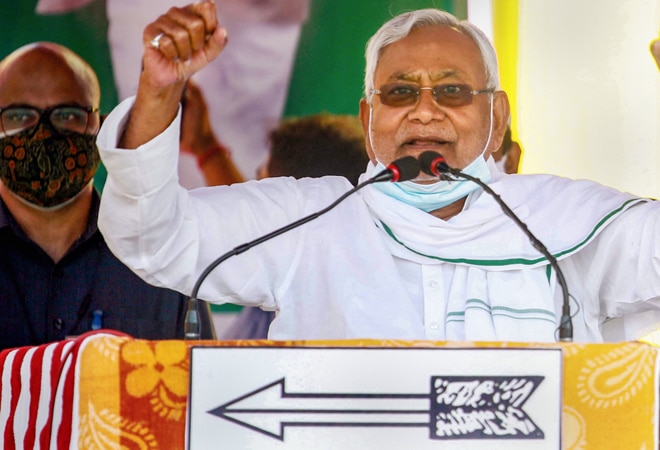 Nitish has been Bihar's CM for nearly 15 years now

Proving almost all poll pundits and exit poll surveys wrong, the three-time chief minister of Bihar, Nitish Kumar, seems all set to retain his chair for another five years despite his party facing some beatings amid anti-incumbency wave in the Bihar Assembly elections.

The Nitish-led NDA coalition had a rather dramatic comeback after the early counting trends today, which showed the alliance performing badly. The counting of votes is still on, and perhaps will go on till evening due to more number of counting centres this time, but the latest trends say the NDA winning in 128 seats, while the RJD-led alliance is leading in 105 seats. The Chirag Paswan-led LJP has not been able to grow beyond two-seat lead, while independent candidates are leading on eight seats.

Interestingly, within the NDA alliance, the BJP appears to be outperforming its senior alliance partner JD-U, suggest the counting trends. The ECI data says of the total lead of 125 seats by the NDA, the BJP leading in 72 seats while the JD-U in 48. Notably, during the 2020 Assembly polls, the BJP contested on 110 seats compared to the JD-U, which fought on 115 seats. A party or coalition of parties needs 122 seats for a simple majority in the Bihar Assembly.

Though leaders close to Nitish have reiterated that "Brand Nitish" has not been affected, they acknowledged that Bihar election results reflect a strong anti-incumbency. Nitish has been Bihar's CM for nearly 15 years now.

But, the JD-U's poor performance is unlikely to affect Nitish Kumar's CM propects. "Modi's image sailed us through this election," Kailash Vijayvargiya, a senior leader of the BJP, told NDTV, adding the party will decide on the issues of government formation and leadership that by evening. Vijayvargiya also said the BJP will "stick to promise" of Nitish Kumar returning as chief minister if they win.

HR Srinivasa, the state's Chief Electoral Officer, said that only 80 lakh of the close to 4 crore votes polled had been counted till noon. He added that the counting of votes might take longer than usual because of various protocols in place given the COVID-19 pandemic.

UK vaccine chief to step down at year-end