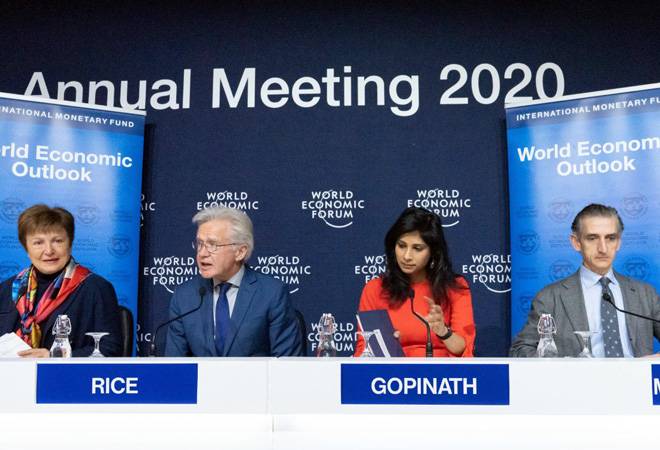 Earlier on Monday, the IMF cut India's growth forecast for 2019 to 4.8 per cent

Speaking to India Today, Gita Gopinath said, "We have projected global growth at 2.9 per cent for 2019 and 3.3 per cent for 2020 which is 0.1 percentage point lower than the October estimates. The vast majority of it comes from our downgrade for India which was quite significant for both years."

Mysuru-born Gita Gopinath, the first woman to occupy the top IMF post, said that the economic slowdown in India had impacted global forecasts by over 80 per cent. However, she added that Indian economy is on the road to recovery, adding that there would be a significant recovery coming in the next fiscal year.

"We see India recovering. There is a significant recovery coming in the next fiscal year. There is a fair amount of monetary stimulus in the system, corporate tax cuts are also there -- these should help with recovery in growth," she said.

"Most major issue to address is the weakness in credit growth. There need to be policies that can resuscitate credit growth but at the same time don't create further NPA problems, that is the first step. There needs to be a quicker recapitalisation of banks," she said.

Earlier on Monday, the IMF cut India's growth forecast for 2019 to 4.8 per cent, a cut of 1.3 per cent in just three months, and said that slowdown in Indian economy also weighed on global growth forecast. In October, the IMF had projected India's economic growth at 6.1 per cent for 2019.

"The downward revision primarily reflects negative surprises to economic activity in a few emerging market economies, notably India, which led to a reassessment of growth prospects over the next two years. In a few cases, this reassessment also reflects the impact of increased social unrest," the IMF said in its World Economic Outlook (WEO) report.

In a blog post on the IMF's website, she reiterated that the biggest contributor to the revision was India, where growth slowed sharply owing to stress in the nonbank financial sector and weak rural income growth.