Prime Minister Narendra Modi is presently at one of the forward locations in Nimu, Ladakh; he's interacting with personnel of Army, Air Force and ITBP 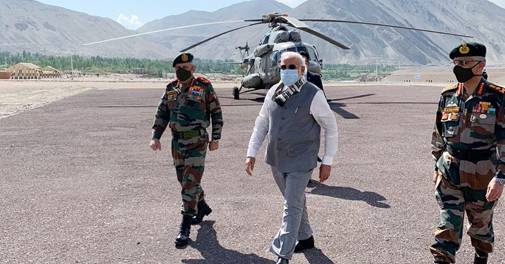 In a surprise visit amid the India-China border tension, Prime Minister Narendra Modi has reached Ladakh to assess the on-ground situation himself. He is accompanied by Chief of Defence Staff General Bipin Rawat and Army Chief MM Naravane in his visit to Ladakh. PM Modi will take stock of the security situation along with General Rawat, Army Chief MM Naravane and Northern Army Commanders Lt Gen YK Joshi and Lt Gen Harinder Singh and 14 Corps officials here.

As per new agency ANI, PM Modi is presently at one of the forward locations in Nimu, Ladakh. He reached there early morning. He is interacting with personnel of Army, Air Force and ITBP. Located at 11,000 feet, this is among the tough terrains, surrounded by  Zanskar range and on the banks of the Indus.

PM Modi is presently at one of the forward locations in Nimu, Ladakh. He reached there early morning.He is interacting with personnel of Army, Air Force & ITBP. Located at 11,000 feet,this is among the tough terrains, surrounded by Zanskar range and on the banks of the Indus. pic.twitter.com/ZcBqOjRzcw

The visit comes days after 20 Indian soldiers were killed in bloody clash with the Chinese at the Galwan Valley. Earlier, it was reported that Defence Minister Rajnath Singh will visit Ladakh today to review India's military preparedness in view of the bitter border standoff with the Chinese army in the region.

Notably, during his Mann Ki Baat address on June 28, PM Modi had told the nation that "those who eyed Indian territory in Ladakh have received a befitting response". He had said if India knew how to maintain friendship, it could also confront someone and give an adequate response. "Our brave soldiers made it clear that they will not allow anyone to taint the honour of Mother India," he had said.

The Indian army and the Chinese are locked in the standoff in multiple locations in eastern Ladakh for the last seven weeks. The tension escalated manifold after 20 Indian soldiers were killed in a violent clash in Galwan Valley on June 15. The Chinese side also suffered casualties but it is yet to give out the details.

After several military-level talks, both the armies have emphasised the need for an "expeditious, phased and step wise" de-escalation as a "priority" to end the seven-week bitter standoff in eastern Ladakh. However, these talks are yet to bear any concrete results.