NPR-2020 for which Union Cabinet approved funds on Tuesday is not limited to identifying "usual resident" and "illegal migrant" alone, but also "doubtful" citizens and "doubtful citizenship"- the terms which are not defined and hence, presents a far greater threat to far too many people in India Protests against CAA, NRC and NPR have been going on across the country (Photo credit: PTI)

With the Union Cabinet's approval of Rs 3,941.35 crore for updating the National Population Register (NPR) on Tuesday, the Central government has taken the second big step towards preparing a nation-wide National Register of Indian Citizens (NRIC). On July 31, 2019, the government had, through a notification in the official gazette, set the ball rolling for the NPR.

The whole exercise - first the NPR which would be scrutinised and verified before the NRIC is prepared - is not just about preparing a list of "usual residents" but also about identifying "illegal migrants" and "doubtful citizenship".

While the entire country has erupted in protest against the Citizenship (Amendment) Act of 2019 (CAA) and the NRC (or NRIC, which is a nation-wide NRC excluding Assam), as the two together would filter out only the Muslims for granting citizenship to outsiders, a far bigger danger is lurking for the rest of us in the form of "doubtful citizenship" that the NPR is mandated to mark out.

A provision for this "doubtful citizenship" has been given in the Citizenship (Registration of Citizens and Issue of National Identity Cards) Rules, 2003 (2003 Rules) under which the NPR is being prepared.

What is "doubtful citizenship"? Who is a "doubtful" citizen?

Sub-rule (4) of Rule 4 of the 2003 Rules - reproduced below - says that "during the verification process of the Population Register (or NPR), a step before the NRIC is prepared, an individual or a family would be marked as "doubtful" citizen or have "doubtful citizenship". 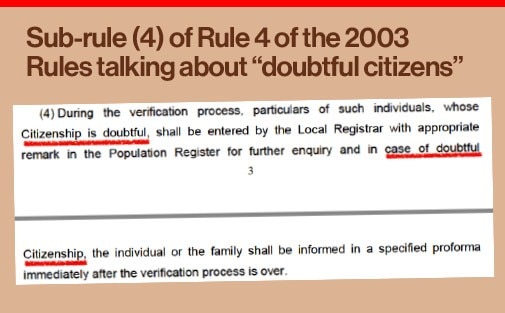 What is "doubtful citizenship"? On what basis an individual or a family would be marked "doubtful" citizen as this provision talks about?

Secondly, the 2003 Rules, which sets the ground rule and provides for procedures and processes to be followed for preparing the NPR and NRIC does not say how an individual or a family would be identified as "doubtful".

Once an individual or a family is marked as "doubtful" citizen, they would be (a) asked to provide information "in a specified pro-forma" and (b) given opportunity to be heard by "the Sub-district or Taluk Registrar of Citizen Registration" before a final decision is taken on whether to include them in the NRIC or not.

While a Sub-district or Taluk Registrar gets all the power to decide who is an Indian citizen and who is not, the pro-forma on the basis of which it would be decided does not exist. Since this is the job of the 2003 Rules, it is clear that the entire exercise would depend on the whims and fancies of these local officials and hence, an immense possibility of arbitrariness and misuse.

Although there are subsequent provisions for publishing the register and "inviting any objections or for inclusion of any name..." in sub-section (6) the potential of this provision to harm can't be ignored or undermined.

Who could be harmed by "doubtful citizenship" provision?

Such an individual or family could be anyone - you, me or the much maligned "Urban Naxals", "anti-nationals", "habitual dissenters", or "tukde tukde gang", who either land in jail or are routinely asked to go to Pakistan for criticising governments by the high and mighty of the land.

When asked about the potential of the undefined and unspecified "doubtful citizenship" provision to harm, Prof Faizan Mustafa, constitutional expert and Vice Chancellor of the Hyderabad's NALSAR University of Law, said:

"In a polarised environment of today, Muslims, liberals and political dissenters will be the primary targets of exclusion through this draconian provision. Similarly, poor people, illiterate, landless, women and orphans may be marked as doubtful citizens. This will also lead to lot of corruption as these officials may seek illegal gratification to remove doubtful tag."

"Such a provision played havoc in Assam"

Prof Mustafa also recalled the Assam experience of a similar provision in the voters' list.

He said: "We have seen how 'doubtful voter' idea introduced by TN Seshan (former Chief Election Commissioner) in 1997 had played havoc in Assam. People were arbitrarily marked as doubtful voters randomly and now these people and their children got excluded from the Assam NRC. We should learn from past mistakes rather than mistake of one state be repeated at the national level."

PDT Achary, another constitutional expert and former Secretary-General of the Lok Sabha (2005-10), said: "This provision is not relatable to any provision in the main law - the Citizenship Act of 1955. Therefore, its legal validity is doubtful."

When asked about the possibility of its misuse, he said: "In absence of a definition for "doubtful citizenship" it is likely to be misused against bona fide citizens by officials at the local levels."

No wonder the Central government has been preparing to build detention centres across the country.

Contrary to its claims, the central government has actually instructed all states and union territories (UTs) to build detention centres, not once but at least thrice.

The evidence is found in the answers the Union Ministry of Home Affairs (MHA) has given in writing to the Parliament. There are several such written answers from the MHA between December 2018 and December 2019.

One written answer from the MHA to the Rajya Sabha, on December 19, 2018 (Question Number 1030)   - as produced below - says detailed instructions were first issued to the states and UTs on September 10, 2014 - that is, just four months after the Modi government first took charge - and then again on September 7, 2018.

The MHA asked the states and UTs to set up "sufficient number of detention centres/holding area/camps outside the Jail premises". Although these are meant for "illegal immigrants", continuation of the "doubtful citizenship" provision under the 2003 Rules that governs the NPR being rolled out now, raises doubts about what is not obvious in this answer. 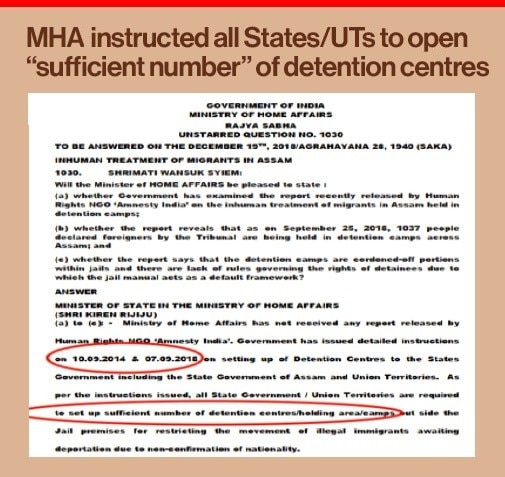 The third instruction was given in January 2019 , when a "Model Detention Centre Manual" was circulated to all states and UTs "reiterating various instructions issued by the Ministry of Home Affairs from time to time with regard to setting up of detention centres". 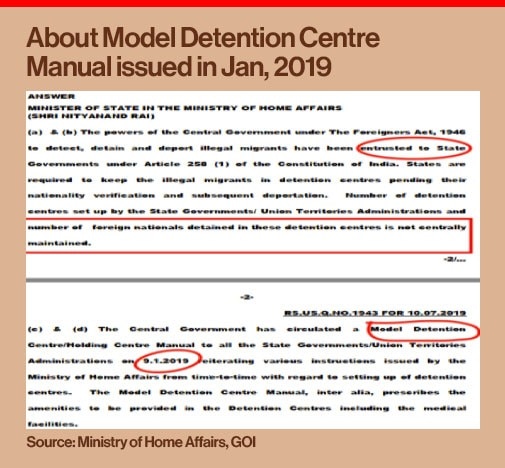 Detention centres to be set up outside existing jails

In these answers, the MHA says such detention centres should be set up "outside the Jail premises". That is because the Central government wants to create more capacity.

This is evident in the fact that though one detention centre exists in Goalpara of Assam, housing 267 detainees - as revealed in the MHA's answer to the Lok Sabha on July 9, 2019 (Question Number 2660) , another one has been sanctioned at a cost of Rs 46.51 crore. 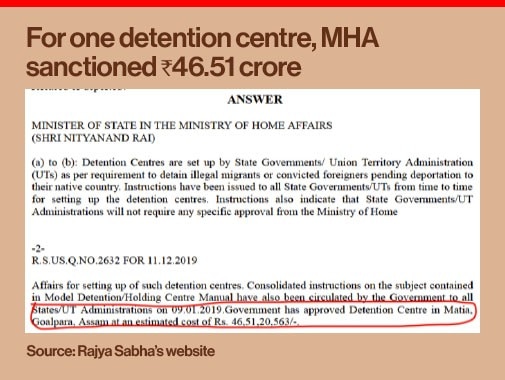 Ground report suggests that this detention centre would house 3,000 detainees and is likely to be completed anytime now.

This is no exaggeration as Assam saw even the family members of former President of India Fakhruddin Ali Ahmed (1974-77) failing the citizenship test twice, and a Kargil war veteran Mohammed Sana Ullah getting jailed for such a failure.

Thus, the danger that emerges out of "doubtful citizenship" to be marked out arbitrarily by a local official and the detention centres being readied by the MHA are not imaginary but very real.

Just how many detention centres are being set up? When the MHA was asked, it said that this job has been "entrusted" to the states and UTs and hence, "no such data is centrally maintained".