Tomorrow he will be the special guest at a business event organised by the Indo-Canadian Business Chamber in partnership with the Canada-India Business Council (C-IBC) and is scheduled to address the gathering. 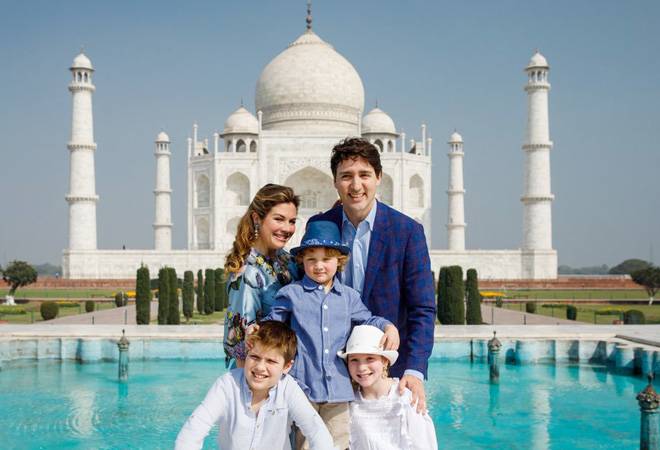 When Canadian Prime Minister Justin Trudeau and his family arrived in Ahmedabad today, on Day 3 of their India visit, dressed in ethnic attire in shades of yellow and red, they made quite a picture. Media seem to have devoted the past couple of days in equal parts to gushing over his youngest son to speculating whether or not Prime Minister Narendra Modi snubbed Trudeau by not personally receiving them at the Delhi airport on Saturday.

Nevertheless, today was a pretty historic occasion - for the prestigious Indian Institute of Management Ahmedabad (IIM-A) at least as the Canadian PM visited the business school. Trudeau was part of a discussion on 'Education and Investment Opportunities' with the students. This was the first time a foreign leader had visited the campus.

Trudeau spoke about gender balance, the idea of an ideal citizen and American President Donald Trump. "Citizens are not fools. Citizens can tell whether someone is genuine in their approach or just trying to live up to some lofty familial expectation," he said.  Talking about sexism, Trudeau said, "Any comments about how a man looks aren't even an eyelash worth of the systemic discrimination women face. As a man in business & politics I had lots of advantage but I didn't go near discrimination, sexism, superficiality & judgement that women go through daily."

The Canadian PM mentioned that he always emphasised on how similar he and Donald Trump are in their approach towards the future, that they both are working for the upliftment of the middle class  and how the policies of both the leaders have worked very well for the Canadian and American economies.

Tomorrow he will be the special guest at a business event organised by the Indo-Canadian Business Chamber in partnership with the Canada-India Business Council (C-IBC) and is scheduled to address the gathering. "Our economic relationship with India, while growing, is still modest. This visit by Prime Minister Trudeau will provide an excellent opportunity to increase our trade and investment engagement as well as profile the Canadian brand", said Kasi Rao, president and CEO, C-IBC.

According to the chamber, two-way trade between Canada and India stood at about USD 8 billion in 2016. That may not seem much, but it has more than doubled since 2010, when bilateral trade was at USD 3.21 billion. Also, the cumulative India FDI into Canada is pegged at USD 2.2 billion for 2016, with Indian companies investing especially in the IT, software, steel and natural resources sectors.

However, Canadian FDI into India is still less than half that figure. The meeting with business leaders might see improvement on that front. According to sources, Trudeau's objective would be to expand the overall ties between the two countries with a focus on defence and security, counter-terror cooperation, trade and investment and tackling climate change. A similar event has been planned in Delhi on February 22. The following day, Trudeau and Modi are scheduled to hold wide-ranging talks in the capital.

So, as per reports, was Trudeau snubbed on arrival, or not?

On one hand, it does seem like a deliberate slight - the government making obvious its discomfort on Trudeau's less-than-ambiguous support for the Khalistan movement - since Trudeau was welcomed by Minister of State for Agriculture and Farmer's Welfare Gajendra S. Shekhawat, not even External Affairs Minister Sushma Swaraj, or any of her deputies, Gen VK Singh or MJ Akbar. Moreover, Modi did not accompany the family to his home state, an honour he has accorded so far to leaders from the US, Israel, China and Japan.

But on the other hand, let's not forget that when Modi visited Canada in 2016, he was also not received at the airport by Trudeau. So no protocols were broken here but nobody seems inclined to ignore allegations that some of Trudeau's colleagues in the Canadian Cabinet had ties with Khalistan supporters. Trudeau himself attended a Khalsa Day event in Toronto where Khalistan flags and the portrait of former Khalistani militant leader Jarnail Singh Bhindranwale were displayed.

A bigger peeve is that the Ontario Assembly, dominated by Trudeau's Liberal Party, passed a resolution last year condemning the 'genocide' of Sikhs in India in 1984. So the long shadow of the decades-old Khalistan movement is certainly looming large over Trudeau's first ever state visit to the country.

'Globally, India ranks beneath the average mobile and broadband download and upload speeds'

Smart cities and IoT to offer big business in Maharashtra