Farmers' protest: In Punjab, farmers continued their 'rail roko' agitation for the fifth consecutive day. The protesters under the banner of Kisan Mazdoor Sangharsh Committee have been squatting on rail tracks since September 24 at Jalandhar, Amritsar, Tanda, Mukerian and Ferozepur 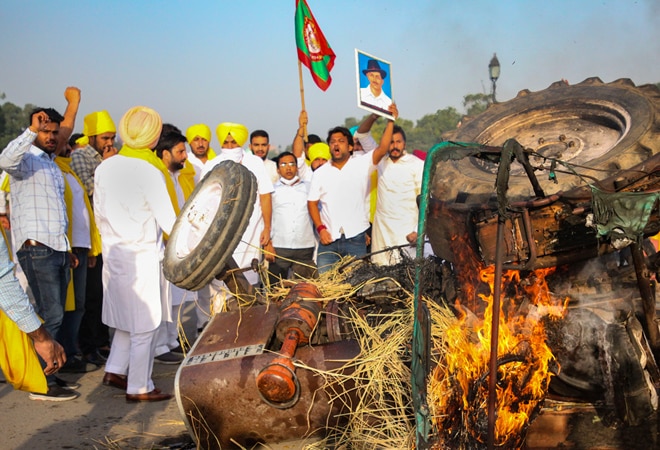 According to the opposition parties, led by the Congress and farmers' outfits, the new agriculture laws will make the farmers vulnerable to exploitation and will lead to the scrapping of the MSP system.

Congress, other opposition parties, and farmers' organisations have scaled up their agitation against the new farm laws across the country after the three bills received the President's nod on Sunday.

In Punjab, farmers continued their 'rail roko' agitation for the fifth consecutive day. The protesters under the banner of Kisan Mazdoor Sangharsh Committee have been squatting on rail tracks since September 24 at Jalandhar, Amritsar, Tanda, Mukerian and Ferozepur.

Punjab Chief Minister Captain Amarinder Singh said he would fight the Centre's malicious new agriculture Acts constitutionally and legally, asserting that he will do whatever it takes to protect the farmers. Singh added he will approach the Supreme Court over the farm laws. Protestors raise slogans as they arrive to join farmers in their ongoing Rail Roko or Stop the Trains agitation against the central governments newly introduced agri-bills. (Photo:PTI)

The AICC general secretary in-charge of Punjab affairs, Harish Rawat, announced a signature campaign beginning October 2 to collect 2 crore signatures of farmers against the new farm laws. The signatures will be submitted to the President of India on November 14. 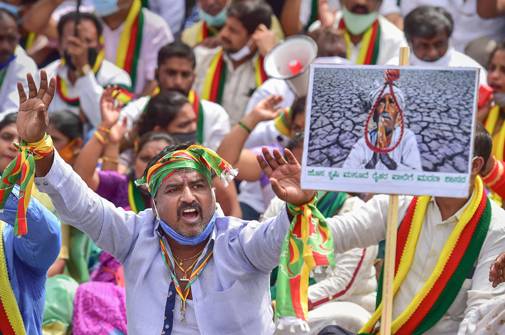 Members of various organisations along with farmers raise slogans during a protest against the farm reform bills. (Photo: PTI)

TAMIL NADU: Tamil Nadu's DMK chief MK Stalin said that his party will go to the apex court to challenge the new law. "We (DMK) as an opposition party are ready to go to court on behalf of farmers and the people," Stalin said. 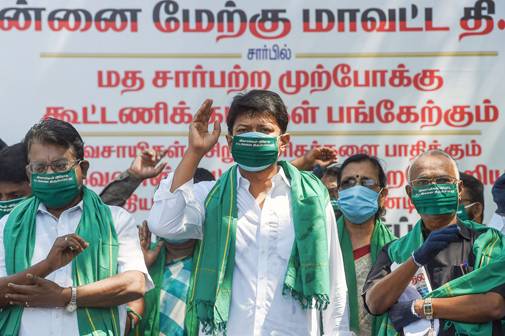 MK Stalin’s son and DMK youth wing secretary Udhayanidhi Stalin along with leaders of allied parties during a protest against the agricultural reform bills. (Photo:PTI) WEST BENGAL: Hundreds of Congress workers took to the streets on Monday, carrying haystacks on their shoulders, as part of the party's nationwide stir against the legislation. Protesters also submitted a memorandum to Bengal Governor Jagdeep Dhankhar, urging him to "intervene and ensure" that the laws were immediately repealed. Several of them were arrested near Raj Bhavan for violation of prohibitory orders. 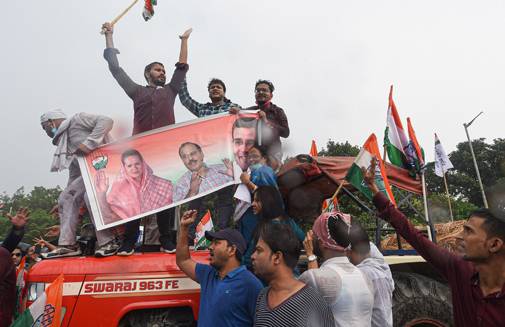 Pradesh Congress workers take part in an agitation against the Central government over the newly passed farm bill in Kolkata. (PTI)

TELANGANA: Telangana Congress leaders and the new AICC in-charge of party affairs in Telangana Manickam Tagore were taken into custody when they tried to proceed to the Raj Bhavan. They were released by police later.

HARYANA: Haryana Congress held a protest outside the party's state headquarters in Chandigarh, alleging the laws will make farmers "dependent" and leave them at the mercy of big corporates.

KERALA: A Congress MP from Kerala moved the Supreme Court on Monday challenging the constitutional validity of various provisions of the contentious new farm Act. "Without APMC acting as a protective shield around the farmers, the market would ultimately fall to the corporate greed of multinational companies who are more profit-oriented," the plea said.

GUJARAT: A Gujarat Congress delegation met Governor Acharya Devvrat and submitted a memorandum demanding President Ram Nath Kovind withdraw his assent to three farm bills. The delegation reiterated that the new farm law will destroy the APMC structure and leave farmers with little choice but to sell to companies, and also deny cultivators minimum support price for their produce. Police detain farmers and Congress Party supporters in Gandhinagar during a protest against the newly passed agri-bills. (PTI)

According to the opposition parties, led by the Congress and farmers' outfits, the new agriculture laws will make the farmers vulnerable to exploitation and will lead to the scrapping of the Minimum Support Price (MSP) system. The parties also critical of the manner in which these bills were passed in Parliament.

However, the Centre has maintained that the laws would be beneficial to the farmers as they would have the freedom to choose the buyers for their produce and get remunerative price. Also, it has stressed that the MSP system will stay.

President Ram Nath Kovind gave his nod to the three farm bills -- The Farmers'' Produce Trade and Commerce (Promotion and Facilitation) Bill, 2020, The Farmers (Empowerment and Protection) Agreement of Price Assurance and Farm Services Bill, 2020 and The Essential Commodities (Amendment) Bill, 2020 -- on Sunday.