Coronavirus lockdown extension: Only Ernakulam district in Kerala qualifies to be a green zone as it has not reported any new cases in the last 21 days. Wayanad that was earlier a green zone, has been earmarked as an orange zone Kerala Chief Minister Pinarayi Vijayan has issued a new set of guidelines for the state keeping in mind the extension of the lockdown by two more weeks. The rules have been made keeping in mind the demarcation of green, red and orange zones. As per the rules, only Ernakulam district qualifies to be a green zone as it has not reported any new cases in the last 21 days. Wayanad that was earlier a green zone, has been earmarked as an orange zone as more cases emerged.

Here's a lowdown of what will remain open and what will be closed in Kerala according to the new guidelines:

1. Sundays will remain closed for everything. There will be no vehicular movement.

4. Non-essential services have been allowed.

5. In the green zones, shops can remain open between 7am and 7:30pm for six days of the week.

6. Taxi services have been allowed in the green zones but only two passengers can board the vehicle.

7. Inter-district travel have been permitted for a maximum of two persons.

"With a new case being reported on Saturday, the status of Wayanad district has changed from green zone to orange zone. Wayanad was earlier in the green zone list declared by the Centre. With no coronavirus patients under treatment, Alappuzha and Thrissur districts have moved to green zone. Kannur and Kottayam are under the red zone. All the other districts in the state are in Orange Zone," he said.

Meanwhile, one case each in Wayanad and Kannur were reported in Kerala on Saturday. According to Ministry of Health and Family Welfare data, Kerala has reported 499 cases of coronavirus so far, with 400 recoveries and discharges and four deaths. 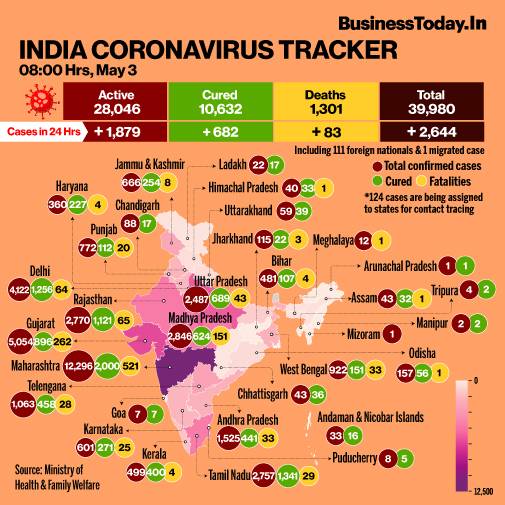 Lockdown 3.0: Maharashtra sees no easing of restrictions in Mumbai, Pune