Given its predominant role as a source of livelihood, the informal economy needs to be fixed first once the health crisis blows over. This would call for a series of long-neglected steps such as collecting comprehensive data on informal establishments and informal labour, benchmarking reasonable national minimum wage, providing comprehensive social security cover and reviving MSMEs 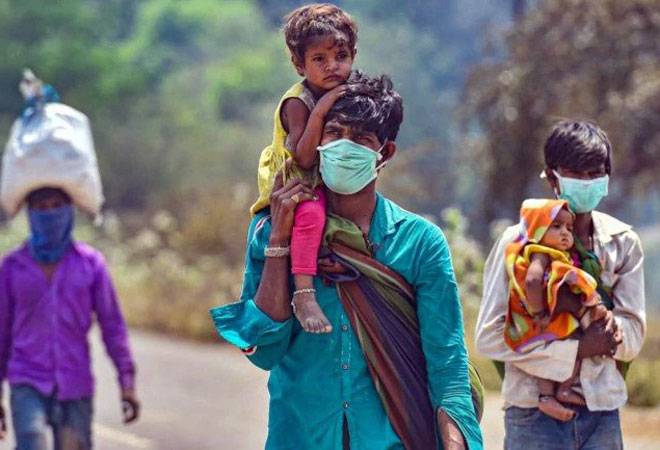 If the informal economy is not fixed this time around, far bigger human and economic tragedies are not far off

If tens of thousands of migrant workers suddenly clogged multiple inter-state borders across the country after the lockdown, putting their own lives in grave danger and confounding the policymakers, there is a sound reason-very poor understanding of the state of the informal economy and informal labour (inter-state migrants being one of them).

For one, it is well-known that the informal sector contributes significantly to the economy in both output and employment but not exactly how much. The last official document which flagged off this dichotomy was a National Statistical Commission (NSC) report of 2012.

While asserting that the informal economy contributed "about 50 per cent of the national product" without revealing how it arrived at this number, it said, "it is increasingly realised that lack of reliable statistics on the size, distribution and economic contribution of the sector...has been a major constraint in providing a realistic understanding of the significance of the Indian economy, leading to its neglect in development planning".

The same is true of the size of the informal labour too. The Economic Survey of 2018-19 said, "almost 93%" of the total workforce is "informal" but did not disclose its source of information which is highly unusual.

Another problem has surfaced in recent times, politically inconvenient information is dismissed, leading to a complete blackout from the public, political and policy discourses.

Here are two such critical instances that would have scandalised any society or economy.

Rising suicide by the unemployed: NCRB

In January 2020, after a long gap of two years during which the farmers' agitation was at its peak, the National Crime Records Bureau (NCRB) of the Ministry of Home Affairs (MHA) released data related to suicides.

It was then discovered that the number of unemployed people committing suicide had not only shot up, but it also surpassed that of the farmers in 2017 and 2018. 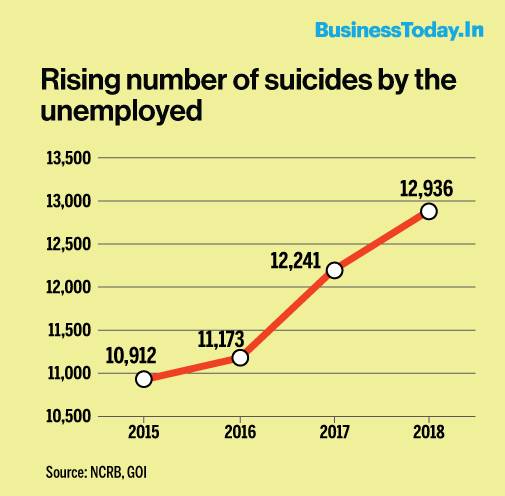 Not that the rising unemployment was unknown, in January 2019, the leaked Periodic Labour Force Survey (PLFS) of 2017-18 showed the unemployment rate rising to a 45-year high at 6.1%.

The official response was an unprecedented decision, at first not to release it and then discredit and dismiss it by questioning the quality of data. The protest resignations by the then chairman of the NSC, PC Mohanan and another member made no difference.

It was released in the last week of May 2019 well after the government had secured a second term for itself in the 2019 general elections.

There was another first in the living memory. On December 27, 2019, the government think tank Niti Aayog released 'SDG India: Index & Dashboard 2019-20' report showing that poverty, hunger and income inequality had gone up in 22 to 25 States/UTs, out of 28 it mapped. (The think tank set a baseline for this purpose in 2018 and mapped progress in 2019).

It found little space in media, public, political or policy discourse either. 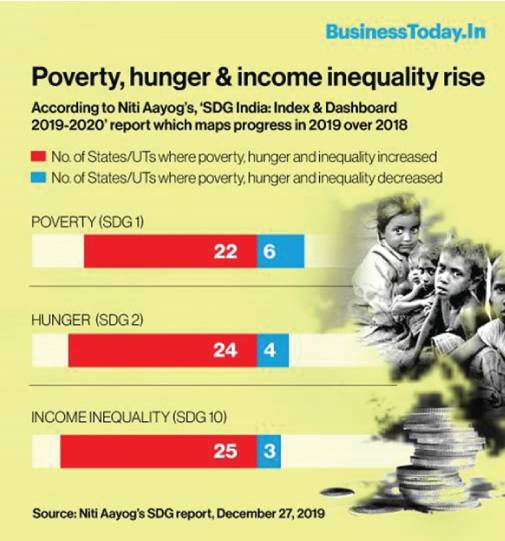 Its data quality was immediately called into question, false claims were made that an expert committee had asked for withholding it and then junked. It has not been released yet.

It bears repetition that a good understanding leads to fixing a problem. That is what is lacking about the informal economy and hence the need to collect comprehensive and reliable data first.

Particularly so because the twin shocks of demonetisation and GST must have brought about significant structural changes, the contours of which are not known at all. The government refused to make any assessment even in the face of mounting evidence of severe hardship people and businesses underwent.

Now that a third and far more severe shock has been given due to the COVID-19 pandemic induced lockdown, Mohanan says the informal workers, more so the migrant workers, can't be targeted for help anytime soon simply because of lack of comprehensive data.

What this means is that the informal workers would not benefit from the direct cash transfers contemplated for some in the Rs 1.7 lakh relief package announced recently.

They would surely benefit from a higher PDS allocation but that would be available only in their places of permanent residence. Mohanan says that precisely is another reason for them to rush back.

Business Today estimated that about 308 million informal sector workers would be vulnerable, both in rural and urban areas, and looking for help. This number was arrived at by using the Economic Survey's claim that "almost 93%" workers are "informal" and the PLFS 2017-18 data (unit level) which had to be processed by the Azim Premji University to arrive at the total number of workers in 2017-18 (465.1 million). The number of vulnerable workers (308 million) was derived by identifying those who had little institutional support.

One way of collecting comprehensive data is the Economic Census which maps all establishments, including the unorganised or informal ones. The last such exercise (6th) was carried out during January 2013-April 2014 and the report was released in March 2016. The status of the next one (7th) is not known.

Mohanan says a quicker and better way could be to strengthen the unorganised sector surveys (manufacturing, trade and services), which were earlier carried out by the National Sample Survey Office (NSSO). The last such exercises were carried out in 2015-16.

The next step in finding solutions is consultation with all stakeholders, informal establishments, informal workers in both formal and informal sectors, trade unions, labour economists, political parties etc. The wider and more comprehensive it is, the better.

Three critical areas of attention are, (a) social security and unemployment allowances to informal workers in both formal and informal economy (b) raising national minimum wage benchmark to more reasonable level (c) strengthening MGNREGS in rural areas and expanding it to urban areas the need for which is evident in the exodus of migrant workers.

One of the most credible voices in labour economics, Prof KR Shyam Sundar of Jamshedpur's XLRI, succinctly maps the existing gaps in the social security cover and suggests possible solutions to consider.

On the first, he says: "The only legislative cover for the informal workers is the Unorganised Workers' Social Security Act of 2008, which is inadequate. It provides very limited social security, only in terms of disability, health and maternity benefits etc. but not for unemployment contingencies."

"The implementation of the 2008 Act has been very poor too; so much so that a universal registry of unorganised workers which was supposed to be prepared is still not in place. The Code of Social Security 2019, which is now pending with a parliamentary panel, dropped unemployment allowance contemplated in an earlier draft," he adds.

On the second (what needs to be done going forward), Prof Sundar propose three measures, (i) bring back unemployment allowance into the Code on Social Security 2019 (ii) cover all forms of labour market insecurities for informal workers in both formal and informal sectors and (iii) rationalise all welfare schemes (such as Aayushman Bharat, contributory Pradhan Mantri Shram Yogi Maan-Dhan (PMSYM) pension scheme of 2019 etc.) covering the entire universe of informal workers, both those below poverty line and above."

The government has been reluctant to set a reasonable benchmark for the national minimum wages.

The Code on Wages 2019, which was passed by the Parliament last year, envisages a mechanism to fix a national benchmark but the rules have not been framed yet, and hence, no progress on that front.

That the government was not even serious was clear when the union cabinet pre-empted such a move by declaring a hike of just Rs 2, from Rs 176 to Rs 178 a day before the legislation was passed.

Earlier in 2019, the government had junked an expert panel's recommendation of fixing the national minimum wages at Rs 375 per day or Rs 9,750 per month. This panel was set up for this specific purpose.

It also ignored the plea of the Economic Survey of 2018-19 which called for a higher benchmark, arguing that a study had established the "presence of a lighthouse effect, i.e., the minimum wage acts as a benchmark that pulls up wages in the low-paid and informal sector by enhancing the bargaining power of vulnerable workers".

Strengthening MGNREGS in rural areas and expanding it to urban areas

In spite of it being dismissed as the "living monument of UPA's failure", the rural employment guarantee scheme (MGNREGS) remains the only reliable livelihood security for the rural landless labourers (which constitute 55% of the total agriculture workforce) and small and marginal farmers falling on bad times.

The relief package of Rs 1.7 lakh announced recently proposed a hike of Rs 20 in the MNREGA wages from Rs 182 to Rs 202. Since no MGNREGS work can be carried out now for the next several months anywhere in the country, it brings no relief during the current crisis.

Nagaland was the only exception. After the current hike of Rs 20, it would still remain lower in 28 states/UTs, assuming that these states have not hiked their agricultural wages after March 2019.

Several economists, including Prof Sundar, have been strongly advocating for a MGNREGS-like programme for the urban poor. The exodus from urban centres is the evidence, if any was required, that job-losses and joblessness are very common in urban areas.

Reeling under the twin economic shocks of demonetisation and GST, MSMEs are likely to have received a knockout punch this time. The mass exodus of migrant workers from the industrial belt of Patparganj in Delhi is a clear indication.

But like other aspects of the informal economy, very little is known about these either.

A 2019 expert panel of the RBI, which looked at long-term solutions after the sector went through the twin shocks of demonetisation and GST, said MSMEs constitute 45% to manufacturing, more than 40% of export, more than 28% of the GDP and 24% of total employment. 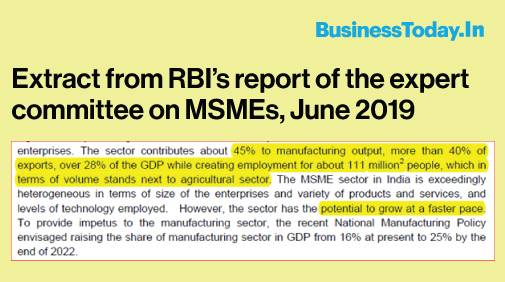 These estimates are based on 2015-16 calculations, as the report itself says. The numbers about this sector's contribution to manufacturing output and export (45% and 40%, respectively) go back several years, even a 2013 report of an inter-ministerial group says the same.

A fresh assessment should then be the first step here too.

What needs to be done to revive the MSMEs is all too well-known. Several committees and groups have submitted their reports in the past two decades.

The top priority on the list of RBI's 2019 report is "the MSMED Act of 2006 (Micro, Small and Medium Enterprises Development Act, 2006) which may be reimagined as a comprehensive and holistic MSME Code".

This law was brought in a decade-and-half ago "to provide for facilitating the promotion and development and enhancing the competitiveness" of MSMEs. Reimagining it has been recommended ad nauseam since then with little gain.

So are the other key recommendations, redefining MSMEs, ensuring credit facilities, increasing public procurement from them, ensuring their better engagement with state governments and SIDBI etc.

What has not happened in all these years is, collection of comprehensive data, plan to fix MSMEs' problems and time-bound goals and devising strategies to achieve those goals.

The same goes for the informal economy as a whole. If it is not fixed this time around, far bigger human and economic tragedies are not far off.

Coronavirus in India: Over 83% patients below 60 yrs, says govt