A higher growth in credit deposit ratio suggests credit growth is rising quickly, which could lead to excessive risks and leveraging on the borrower's side. The credit-deposit (C-D) ratio of scheduled commercial banks, or the share of each rupee of deposit going towards credit markets, improved 2.9 percentage points between March 2017 and 2018. A higher growth in credit deposit ratio suggests credit growth is rising quickly, which could lead to excessive risks and leveraging on the borrower's side. In case of banks, it could imply there will be a rise in NPAs when economic cycle reverses. This ratio serves as a useful measure to understand the systemic risks in the economy. The ratio stood at 78.4 per cent in March 2016, sharply declined to 73.8 per cent a year later and again increased to 76.7 per cent in the financial year 2017-18. A historical look at the measure reveals the following interesting details:

2. Tracking the data over two decades suggests year 2017 witnessed the sharpest decline, 4.9 percentage points, in this ratio. Also, 11 out of these 27 years saw a decline in their C-D ratio

3. The national capital region of Delhi saw the lowest number of declines in this ratio, only 9 years in more than 25 years time 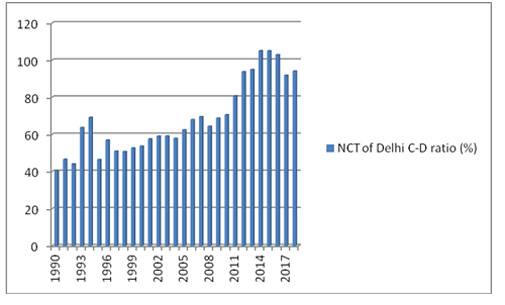 4. Only the western region which constitutes states like Goa, Gujarat, and Maharashtra did not see any fall in their C-D ratios over the past five years 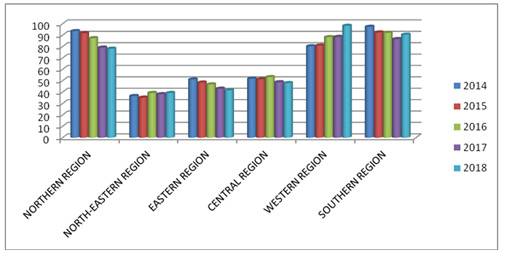 Figures are C-D ratio (%), Data for the financial year ending in March 2018