The Indian Navy rescued 148 people from a barge that went adrift in the Arabian Sea hours before the cyclone made landfall in Gujarat. The Navy sent three frontline warships to rescue 410 people on board two barges that went adrift after receiving messages 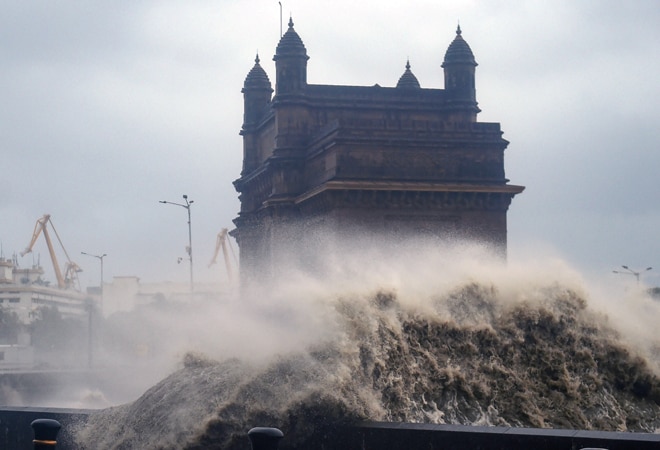 Extremely severe cyclonic storm Tauktae made landfall on Monday at the Gujarat coast around 9 pm and ended around 12 am on Tuesday. The wind speed reached 190 km per hour in Gujarat and uprooted trees, and damaged structures and electricity lines. After midnight, the weather department downgraded Cyclone Tauktae from 'extremely severe' to 'very severe'.

In Maharashtra, six people died from the cyclone and nine were injured. Mumbai witnessed the highest-ever wind speed of 140 km per hour on Monday. In Karnataka, eight people were reported dead, while over 1 lakh people were evacuated from the coastal areas in Gujarat.

The Indian Army stated that its teams and task forces are prepared for relief work. Indian Navy, on the other hand, rescued 148 people who were onboard a barge that went adrift in the Arabian Sea.

1. Gujarat saw winds with a speed of 155-165 km per hour, gusting to 190 km per hour due to Cyclone Tauktae. It is said to be the biggest cyclone to hit the region in decades. The winds slowed down after midnight, following which the weather department downgraded the severity of the cyclone.

2. The Indian Navy rescued 148 people from a barge that went adrift in the Arabian Sea hours before the cyclone made landfall in Gujarat. The Navy sent three frontline warships to rescue 410 people on board two barges that went adrift after receiving messages. INS Kolkata, INS Kochi and INS Talwar were the warships that were deployed by the Navy. Search and Rescue (SAR) operations continued through the night for the remaining crew, said a Navy spokesperson.

3. "Due to severe cyclonic storm, unfortunate incidents have occurred involving three construction barges of Afcons working on a project of ONGC in Western Offshore fields in the Arabian Sea and one drilling rig of ONGC deployed for exploration purpose. ONGC is taking all possible measures in coordination with ODAG (Offshore Defence Advisory Group) and MRCC (Maritime Rescue Coordination Centre) to ensure the safety of personnel and vessels. At least 148 people have been rescued so far. Rescue operations are still on," said ONGC.

6. Mumbai saw the highest-ever wind speed of 114 km per hour and intense rainfall. Flight operations were suspended for hours and the Bandra-Worli sea link also remained closed for traffic due to strong winds. On Tuesday, the IMD alerted that Colaba and Santacruz are likely to receive moderate to intense spells of rain with gusty wind.

9. In Gujarat, four people were killed due to Cyclone Tauktae that left a trail of destruction along the western coast. The eye of the extremely severe cyclonic storm hit the Gujarat coast between Diu and Una.

10. "With the impending landfall of the extremely severe cyclonic storm forecast in coastal areas of Gujarat, Indian Army units and formations have prepared themselves with substantial teams along with elements of communication and engineer task forces to provide relief and all kinds of assistance," stated the Army in a statement.

Navy rescues 146 onboard barge that went adrift off Mumbai