The fungal infection, which affects the brain, lungs, and sinuses, can be lethal to those suffering from diabetes and having compromised immune systems 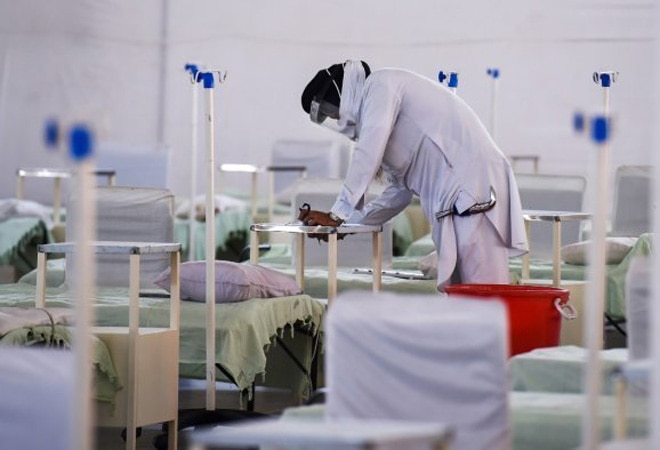 Drugs used in the treatment of mucormycosis have severe side-effects, and can lead to kidney issues, neurological dysfunction and stroke, the doctor said

Hospitals in Delhi have reported a rise in the number of back fungus cases or mucormycosis among people recovering from COVID-19 during the second wave and it could be ascribed to "irrational" use of steroids at home without consulting a doctor, medical experts said on Tuesday.

The fungal infection, which affects the brain, lungs, and sinuses, can be lethal to those suffering from diabetes and having compromised immune systems.

"If such patients are administered steroids, their immunity reduces further, allowing the fungus to thrive," he said.

Dr Naruka said he has been dealing with three to four patients with severe mucormycosis every day as compared to one or two cases a month before COVID-19 began.

COVID-19 kills one or two per cent of the people infected, while black fungus has a mortality rate of 75 per cent, he said.

Drugs used in the treatment of mucormycosis have severe side-effects, and can lead to kidney issues, neurological dysfunction and stroke, the doctor said.

Dr Ajay Swaroop, Chairman, Department of ENT at Sir Ganga Ram Hospital, termed the mucormycosis situation "terrible". "We have more than 35 cases, of which around 10 are Covid positive. The rest developed the fungal infection post-Covid," he said.

Mucormycosis is a serious disease and requires hospital admission. Maybe, if diagnosed early, it might not require surgical intervention, Dr Swaroop said.

Amphotericin B Liposomal, used for the treatment of the fungal infection, is unavailable at most of the pharmacies, he said.

Dr Sumit Mrig, Head ENT, Max Hospital, Saket, said 15 to 20 cases have been reported at their facility in the last three to four days.

"We have operated on 14-15 patients so far and four to five surgeries are planned for Tuesday. The factors responsible are extensive use of steroids to an extent that people have taken them without doctor's advice at home," he said.

Patients from rural areas are also coming in with mucormycosis, Dr Mrig added.

Sugar monitoring is important. The fasting sugar should be around 100-110 and thereafter, the level should not rise above 140, he said, adding one should seek medical advice if experiencing symptoms such as unilateral headache, facial pain, pain in the eye, decreased sensation on one side of the face, bloody nasal discharge.

Dr Abhinit Kumar, Head of ENT, Aakash Healthcare, said he has been coming across one or two such cases a day for the last 10 days.

The hospital said it has four cases of mucormycosis currently.

"All these patients have been referred here from private hospitals and nursing homes, which did not have Amphotericin B for their treatment," he said, adding LNJP has stock of three months.

Before COVID, the drug was not being used much. Now, the demand has risen, leading to a shortage of it, Dr Kumar said.

Dr Yudhyavir, Assistant Professor (Anaesthesiology and Critical Care), AIIMS, said the drug is not commonly available and is manufactured in lesser quantities. He said steroids reduce inflammation in the lungs, but also reduce immunity and increase blood sugar levels in both diabetics and non-diabetic Covid patients.

This is leading to an explosion in the number of black fungus cases.

"This time people are aware of a lot of steroids being used in treatment of COVID and are using them without medical supervision. Even some administration officials are promoting use of steroids, which is dangerous, and leading to cases of mucormycosis," the doctor said.

Another official from the central government-run hospital said the healthcare facility has around 30 mucormycosis patients at present.

"Some patients have been taking medicines that doctors had prescribed to their friends or family members earlier. This is leading to inadvertent use of steroids."

The increase in the number of "black fungus" cases this year can be attributed to the high COVID caseload and more severe cases during the second wave. "The use of steroids has increased because of limitations of resources," Dr Agarwal said.