Government wants farmer organisations to conclude their protests and resolve their contentions via dialogue, but this decision lies with the farmers, Agriculture Minister Narendra Singh Tomar said 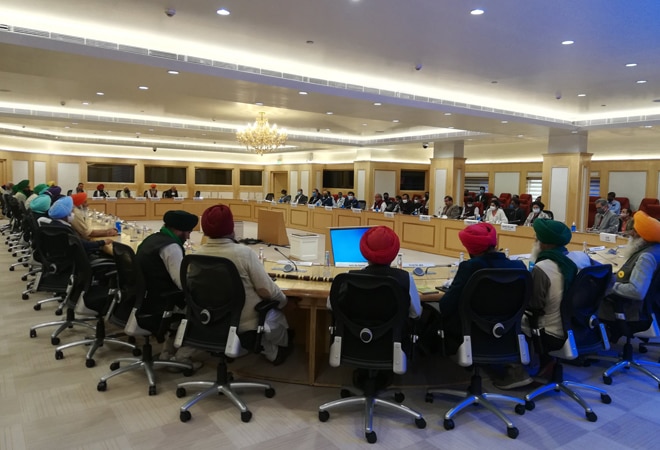 A three-hour-long meeting between representatives from protesting farmer bodies and union ministers on Tuesday did not see any progress in resolving the contentions over recently passed farm laws. Now the farmer unions have been asked to submit specific issues related to the three contentious farm laws by Wednesday, which will be taken up in the next round of meeting scheduled on Thursday.

During the meeting at Vigyan Bhawan in Delhi, Agriculture Minister Narendra Singh Tomar, Commerce Minister Piyush Goyal and Minister of State for Commerce Som Prakash, explained the benefits of new farm laws to farmers' representatives. Tomar reiterated that the government is committed to farmers' welfare, and development of agricultural sector is high on Centre's priorities.

The government proposed to form a committee to look into the issues raised by the farmers, but the suggestion was turned down by the 35 protesting farmer unions.

"The meeting was good and we have decided that the talks will be held on December 3. We wanted to constitute a small group, but all [farmer] unions wanted everyone to participate in the talks. The government does not have problem in holding discussions with everyone," Tomar said while talking to reporters after the meeting.

Government wants farmer organisations to conclude their protests and resolve their contentions via dialogue, but this decision lies with the farmers, Tomar said.

The meeting was meaningful and happened in a cordial environment, Goyal said in a tweet later in the day. He also reiterated that the central government intends to resolve the issues over the farm laws though discussions with farmers.

After the meeting, the All India Kisan Sangharsh Coordination Committee (AIKSCC) said in a statement that the talks remained inconclusive and the government's proposal was not acceptable to farm unions. It further said protests will now intensify across the country until their demands are met.

Soon after the Vigyan Bhawan meeting ended, a separate round of talks began at the Agriculture Ministry with representatives of Bharatiya Kisan Union (BKU). The government said the talks with BKU members took place in a cordial atmosphere and the minister listened attentively to suggestions from the farmers.

Farmer unions have been demanding the three new farm laws to be either repealed or amended to accommodate their demands. Brought into effect from September, the laws allow farmers to sell their produce anywhere in the country. Centre has touted these legislations as major reforms in the agriculture sector that will remove the middlemen and help increase farmers' income.

However, the protesting farmers are worried that the new laws will eliminate the safety cushion of Minimum Support Price (MSP) and procurement system, and render the mandi system that ensures earnings for various stakeholders in the farm sector, null and void.

IBC realisations to fall 40% in FY21 due to COVID restrictions: ICRA