Dissenting farmers, who have been protesting at borders of Delhi for the past 14 days, have instead said that they will block Delhi-Agra and Delhi-Jaipur highways on December 12 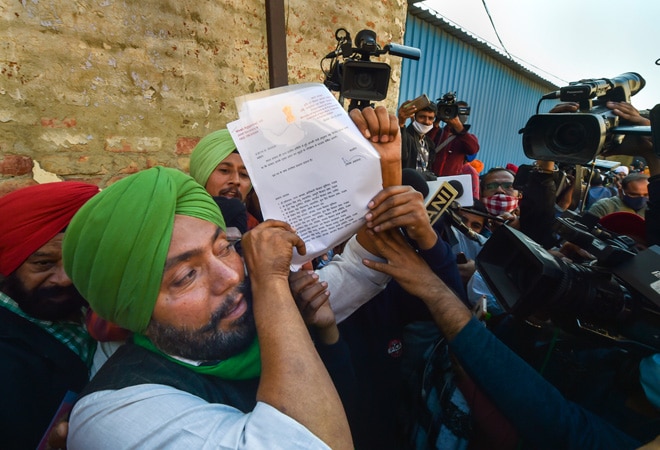 Farmer bodies protesting against the contentious farm bills have rejected the proposed amendments Centre suggested on Wednesday. The decision was followed by measures to further intesify the protests against the recently formed agriculture laws. Dissenting farmers, who have been protesting at borders of Delhi for the past 14 days, have said that they will block Delhi-Agra and Delhi-Jaipur highways on December 12. They have also called for nationwide protests on December 14.

Farmer leaders have, however, said that they will consider future proposals from central government. At a press conference held after receiving Centre's proposals, farmers leaders that they will block all roads in Delhi is the farm laws are not repealed.

"There is nothing new in government proposal. We will continue our protest against three agri-marketing laws," said farmer leader Prahalad Singh Bharukheda.

There hasn't been any decision on next round of talks with the Centre on the three contentious agriculture-marketing laws, added another farmer leader Shiv Kumar Kakka. He said that farmer presently gathered at the Singhu border might take a call on entering Delhi in coming days.

After a meeting with 13 farmer unions was cancelled earlier today, the union government had sent a draft proposal to them. In the proposal, Centre had agreed to give written assurance for continuing the minimum support price (MSP) regime, allow disputes to be escalated to civil courts instead of sub-divisional magistrate being the final dispuet resolution authority, and scrap the Electricity Amendment Bill that was opposed by the farmers. All three proposals have been denied by the 13 dissenting farmer unions.

As for widespread protests on December 14, the farmer unions said that they will gherao Bharataiya Janata Party offices, with demonstrations across the country.

In the draft proposal, the government expressed willingness to provide all necessary clarifications on farmers' concerns about the new farm laws. The Centre did not address the main demand of protesting farmers for the repeal of the laws in the dcoument, though.

Reports suggest that Union Agriculturre Minister Narendra Singh Tomar has met Home Minister Amit Shah after the development. Shah had met 13 union leaders on Tuesday and said the government would send a draft proposal on key issues raised by the farmers regarding the three farm laws. This meeting had also failed to make any headway in convincing farmers after several failed rounds meeting between of Centre and farmer.

Meanwhile, a delegation of Opposition leaders met President Ram Nath Kovind to discuss the issues being raised by dissenting farmers.

Face shields alone not enough to protect against COVID-19: study