On pending compensation cess disbursal to states, FM Nirmala Sitharamam said that there is no review being done in the current structure 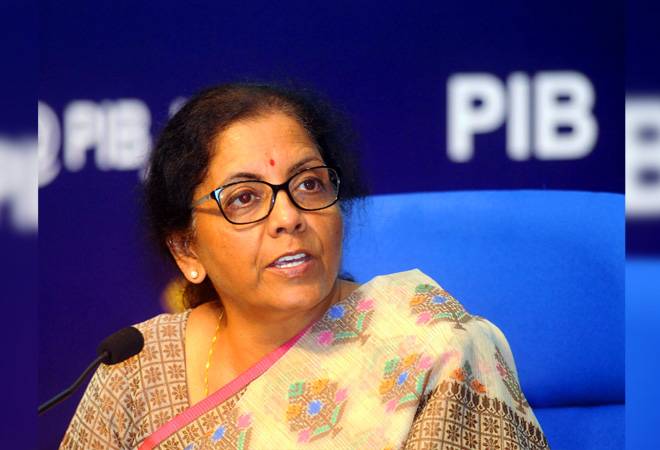 Despite all government efforts to arrest the slowdown, Indian economy has registered its slowest rate of growth in six and a half years with GDP growth rate reaching 4.5 per cent in the September quarter. The Finance Minister's press conference is likely to address the growing concerns over decline in economic growth that came on the back of dwindling consumer demand, slowing private investment and global slowdown.

The Finance Minister in her last press conference held on November 20 had announced that the Cabinet had given its in-principle approval for disinvesting stake in five blue-chip PSUs, including state-owned Bharat Petroleum Corporation Ltd (BPCL).

ALSO READ: 'I condemn this approach': FM Sitharaman says her onions remark taken out of context

5:03 pm: "On IBC, government has been quick-footed to respond to developing situation in public domain. Each time we come up with amendments, we hope to have them passed at the earliest in the Parliament," sayd the FM regarding the IBC amendments tabled before the Lok Sabha.

5:00 pm: "Till now, sectors that have demanded some kind of intervention, we have responded to them. I'll be keen to see whether these steps are meeting the expectations of the sectors. If not, I may want to see if I need to do more. As of now, there is no other sector that has approached me as yet," says the FM.

4:59 pm: I will not engage in speculations over retail inflation and interest rates, says the Finance Minister.

4:56 pm: "We have a GoM meeting which is reviewing on every one-two days and deciding on how to further take up the import related issues. Goverment is taking every step to import onions and restore supply to the market," FM Sitharaman said on a question on onion prices.

4:52 pm: FM Nirmala Sitharaman said that there is nothing to say over questions of review of compensation cess to states under GST.

4:43 pm: FM Nirmala Sitharaman said that she has not discussed GST rate hike with her team yet.

"I don't know where this is coming from. I have not been to the GST Council yet. So whether it is going to request them (the Finance Ministry team) for a hike or to ask them to review, nothing have we spoken among ourselves," said the Finance Minister.

She also turned down the possibility that it is completely off the table.

4:37 pm: "The whole attempt of the government is to ensure that the direct benefit transfer happen so that there are no pilferages. I am glad that the CAG is also talking that there may be a risk. They have not said it has happened already. The attempt of this government is make sure that by using DBT we'll get over the problem, if any," said FM Sitharaman over risk of misuse of Ujjwala scheme.

4:34 pm: Second half is not over yet, says FM Sitharaman on a question that whether the government is still expecting to see some uptick in economic growth in the latter half of this fiscal.

4:33 pm: I am not yet in the stage to make any predictions, says Finance Minister Nirmala Sitharaman on a question regarding which quarter will see economic activity pick  up.

4:27 pm: "The picture regarding revenue targets will be clear in next few weeks. Now, on December 15, figures for advance tax for third quarter will come and we will get a fairly good estimate of what is going to be the impact of corporate tax reduction. Then only we will arrive at a realistic figure as to what will be the revenue collection under income tax in this year," said Revenue Secretary Ajay Bhushan Pandey.

4:25 pm: 13,000 appeals against the tax department have been withdrawn from various courts, says Pandey.

4:23 pm: 58,322 cases have been covered under the faceless assestment system and questionnaires have been issued in 19,000 cases, Pandey says.

4:16 pm: The refund system for GST has been completely automated, says Pandey.

4:07 pm: CEA Krishnamurthy Subramanian also talked about lowering ESIC contribution from 6.5 per cent to 4 per cent.

4:06 pm: 40 labour laws that existed at the Centre have been codified into four codes, says CEA Krishnamurthy Subramanian.

3:54 pm: Actual impact of the Rs 25,000-crore realty fund will be many, many times that this. The investment committee is completing due diligence on the first set of deals today, CEA Krishnamurthy Subramanian said.

3:36 pm: The Finance Ministry has announced a slew of measures since August to bring the economy out of slowdown, including corporate tax cut, consolidation in banking sector, sector specific boosters and more. None of these have had any substantial impact, though.

3:24 pm: It has been a tough week for FM Sitharaman as she faced criticism for her 'I don't eat onions' remark in Parliament. In a strong response, the Finance Minister stated that her remark was taken out of context, and that she condemns this approach to raise questions about the economy.

3:18 pm: Troubles have deepened for Indian economy as retail inflation touched a 40-month high of 5.54 per cent in November, whereas industrial output shrunk by 3.8 per cent in October.

3:12 pm: FM Nirmala Sitharaman will address a press conference a short while from now, her first since India's GDP growth sunk to a six-and-a-half-year low of 4.5 per cent in the September quarter