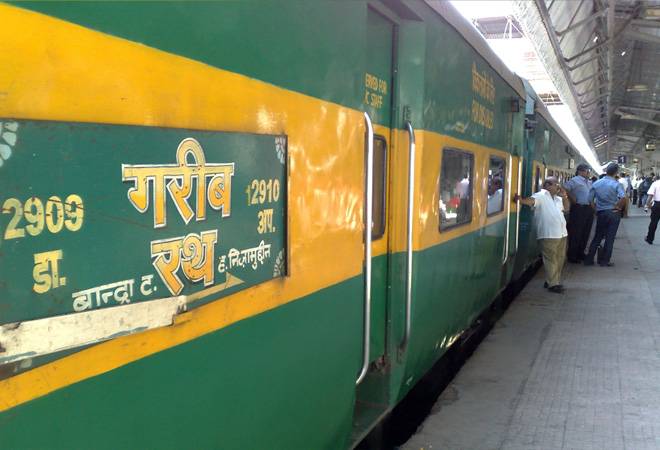 The Railway Ministry on Friday rolled back its decision to replace services of Garib Rath in Kathgodam-Jammu and Kathgodam-Kanpur route by mail or express trains, and the services of the low-cost no-frills AC train will be resumed from August 4, officials said.

It said due to temporary shortage of coaches on Northern Railway, two pairs of weekly trains of Garib Rath service were temporarily operated as express services.

An official from the ministry said no plans are underway to replace the Garib Rath trains, 26 of which are operational across the country.

The initiation of Mail or Express trains in the said route also means that train fare would go up passengers. For example, a Delhi-Bandra Garib Rath ticket that was priced at Rs 1,050 will cost Rs 1,500 - Rs 1,600 in case of Express trains.

Garib Rath -- touted to be poor man's no frills AC three-tier train -- was planned to be phased out by the national transporter and replace those with express trains with higher fares.

The train was started in 2006 by then Railway Minister Lalu Prasad Yadav and the target was middle and lower income classes. The first 'Garib Rath' was flagged off from Bihar's Saharsa to Amritsar in Punjab.

However, the manufacture of new coaches for the train has already been stopped putting a question mark on their continuance as the present coaches are 10-14 years old and require heavy maintenance for which railways have to incur heavy cost.