While Shiv Sena, NCP and Congress are still struggling to reach a consensus, the BJP is hoping to get support from independent MLAs and even NCP, indicating it's still not out of the game 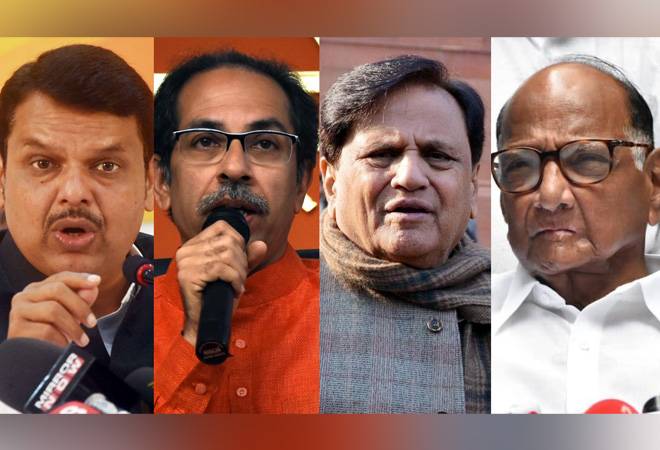 The political impasse in Maharashtra is refusing to die down with the ball now in NCP leader Sharad Pawar's court. The NCP today appointed five members for a joint committee with the Congress party to chalk out a 'common minimum programme' with the Shiv Sena for government formation in Maharashtra. The committee comprises NCP's legislature party head Ajit Pawar, its Maharashtra chief Jayant Patil, party veteran Chhagan Bhujbal, Mumbai unit chief Nawab Malik and Leader of the Opposition in state Legislative Council Dhananjay Munde.

Both NCP and Congress want to get the best out of the possible alliance with the Shiv Sena. In this regard, Pawar and senior Congress leader Ahmed Patel had a detailed meeting on Tuesday. As per reports, NCP will seek rotational CM post, along with plum portfolios, while the Congress may demand deputy CM post before agreeing to form a government with Shiv Sena.

While Shiv Sena, NCP and Congress are still struggling to reach a consensus, the BJP is hoping to get support from independent MLAs and even NCP, indicating it's still not out of the game. As per India Today, both the Sena and the BJP are trying to woo NCP veteran leader Pawar. While Sena could offer his party the rotational CM post, the BJP has reportedly promised to induct his daughter Supriya Sule in the Union cabinet if he jumps the bandwagon towards the BJP.

The friends-turned foe, BJP and Shiv Sena, are also keeping all options open. Both the two parties had fallen out over Shiv Sena's demand of sharing the chief minister's post on a rotational basis. Shiv Sena has now hinted that BJP broke ties by not adhering to the previously agreed formula. Shiv Sena Chief Uddhav Thackeray said on Wednesday the BJP was still contacting him to form the government. "They are giving unclear and different proposals every time. However, we have decided to go with the Congress-NCP." Later, BJP leader and former Maharashtra CM Narayan Rane clarified that the party had told him to make efforts to revive ties with the Shiv Sena.

On Tuesday, President's rule was imposed in Maharashtra after Governor Bhagat Singh Koshyari in a report to the Centre stated that the formation of a stable government was impossible in the current situation despite all his efforts.

The Shiv Sena also moved the apex court challenging his decision but failed to get an urgent hearing. It also sought a direction from the SC to quash the Governor's decision of not allowing it to prove majority on the floor of the House. The party claimed it was invited to form the government on Monday and had indicated its willingness to do so on Tuesday. In the petition, Sena contended the governor's decision violated Articles 14 and 21 of the Constitution.

In the 288-member Maharashtra assembly, the BJP emerged as the single largest party but fell short of the majority of 145 by 40 seats. The Shiv Sena, which was a BJP ally, garnered 56 seats. While the NCP had 54 seats and Congress had 44.

Nita Ambani elected to board of The Metropolitan Museum of Art; 1st Indian in 149-year history