PM Modi in US: "Howdy Houston," says PM Modi after arriving in the energy capital of the US, adding that he is looking forward to a wide range of programmes 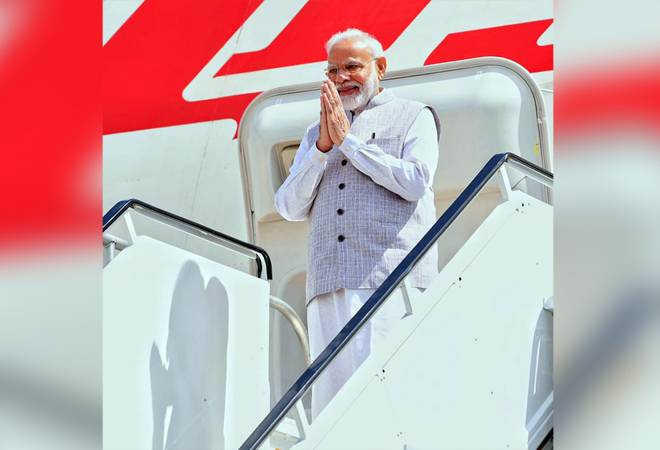 Prime Minister Narendra Modi on Saturday arrived in Houston, as he began his week-long visit to the United States with an aim to boost bilateral ties between the two nations. The PM will attend the 74th session of the United Nations General Assembly (UNGA) in New York. He will also attend the grand "Howdy, Modi!" event, where he will share the stage with US President Donald Trump and will address over 50,000 Indian-Americans. The three hours long event is scheduled to be held on Sunday at the NRG Stadium in Houston. Today's 'Howdy Modi' at the sprawling NRG Football Stadium in Houston is the largest gathering ever for an elected foreign leader visiting the US, other than the Pope.

Here is the full schedule of PM Narendra Modi's US Tour:

It's a bright afternoon here in Houston.

Looking forward to a wide range of programmes in this dynamic and energetic city today and tomorrow. pic.twitter.com/JxzWtuaK5x

It is impossible to come to Houston and not talk energy!

Had a wonderful interaction with leading energy sector CEOs. We discussed methods to harness opportunities in the energy sector.

Also witnessed the signing of MoU between Tellurian and Petronet LNG. pic.twitter.com/COEGYupCEt

21 September: PM Modi arrived at the George Bush International Airport in Houston at 12:35 am (11.05 pm on Indian Standard Time) on Saturday. Houston is 10:30 hours behind New Delhi.

1800 hours (4.30 am IST): PM attended a round-table meeting with energy sector CEOs at Hotel Post Oak. The meeting was focussed on energy security and mutual investment opportunities between India and the United States to diversify cooperation in this sector. On the sidelines of the meeting, Tellurian and Petronet signed MOUs for up to five million tonnes of LNG through equity investment in Driftwood.

1935 hours (6:05 am IST): The PM had a photo opportunity with PIOs and a brief interaction with the NRIs.

22 September: PM Modi will attend the grand "Howdy, Modi" event, where he will share the stage with US President Donald Trump and will address over 50,000 Indian-Americans. The three hours long event is scheduled to be held at the NRG Stadium in Houston. The NRG stadium gates will open at 6 am (4:30 pm IST) to accommodate and seat 50,000 people by 9 am (7:30 pm IST). The cultural programme will end by 12:30 pm (11:00 pm IST).

24 September: PM Modi is scheduled to co-chair the India-Pacific island states leaders meet which will be followed by lunch hosted by the UNSG. In the afternoon, PM Modi will attend the 150th-anniversary event to commemorate Mahatma Gandhi in the UN called 'Leadership Matters: Relevance of Gandhi in Temporary Times'. He will be awarded with the 'Global Goalkeepers Award' at Lincoln Centre by Bill and Melinda Gates Foundation for leadership in the field of sanitation through Swachch Bharat Abhiyan.

There will be three launches at the event:

25 September: PM Modi will chair the Bloomberg Business forum followed by a conversation with Mr Bloomberg. He will also participate in an investment round-table meeting organised by the Government of India and Invest India with CEOs of over 40 companies.

26 September: PM is expected to attend several bilateral meetings. More details are awaited in the matter.

27 September: PM Modi will address the United Nations General Assembly session in the first half of the day (approximately 9 pm IST). The Prime Minister and the Foreign Minister are also scheduled to attend various bilateral and plurilateral meetings on the sidelines of the UNGA session.

Howdy, my friends, says PM Modi as crowd cheers for him