Who is Harsh Vardhan Shringla, the man behind PM Modi's 'Howdy, Modi' event in Houston

The 'Howdy, Modi' event will not only host PM Modi and US President Donald Trump's address to the Indian diaspora but it could also mark a $7.5 billion energy deal. And if there's anyone who could be given credit to make it all possible, it's Harsh Vardhan Shringla 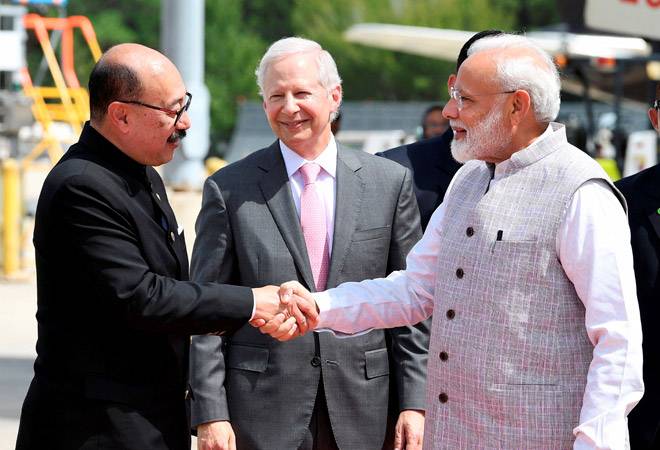 Prime Minister Narendra Modi being received by Indian ambassador to the US, Harsh Vardhan Shringla, and US Ambassador to India Kenneth Juster on his arrival at George Bush International Airport in Houston, Texas, USA, on Saturday. Photo: PTI

Prime Minister Narendra Modi's 'Howdy, Modi!' programme is undoubtedly one of the most talked-about events happening in the US today. The 'Howdy, Modi' event will not only host PM Modi and US President Donald Trump's address to the largest ever gathering of the Indian diaspora in Houston, Texas, but it could also mark a mega $7.5 billion energy deal between both the nations. And if there's anyone who could be given credit to make it all possible, it's India's ambassador to the United States -- Harsh Vardhan Shringla.

Harsh Vardhan Shringla is a career diplomat. Before joining as India's ambassador in the US, he served as high commissioner of India to Bangladesh and as the ambassador to Thailand. The St Stephen's College alumnus, Shringla joined Indian Foreign Services in 1984. In his long career of 35 years, Shringla served India in different capacities across several countries. In his circles, Shringla is usually described as "no-nonsense" and "sharp" diplomat, reported Mint. Though the Texas India Forum (TIF) is the organiser behind the 'Howdy, Modi' event, Shringla-led Indian embassy in Washington played a crucial role in making it possible. It's Shringla who's reportedly the brain behind setting up a second meeting between Modi and Trump at the sidelines of the UNGA on September 24.

Today's 'Howdy, Modi' at the sprawling NRG Football Stadium in Houston is the largest gathering ever -- over 50,000 people have signed up for it -- for an elected foreign leader visiting the US, other than the Pope. In terms of gathering, the 'Howdy, Modi' programme is even bigger than two previous mega-events held for PM Modi in the US -- the 2014 Madison Square Garden and the 2015 San Jose events. As described by PM Modi himself, US President Donald Trump's presence at the Houston event marks a new milestone and is a testament to the importance of the role played by the Indian community in the US.

After arriving in the energy capital of the US, PM Modi earlier today tweeted: "Howdy Houston. It's a bright afternoon here in Houston. Looking forward to a wide range of programmes in this dynamic and energetic city today and tomorrow."

Looking forward to a wide range of programmes in this dynamic and energetic city today and tomorrow. pic.twitter.com/JxzWtuaK5x

The Prime Minister was received at the airport by Harsh Vardhan Shringla and his American counterpart Ken Juster. From Houston, PM Modi will fly to New York, where a packed schedule awaits him.