Overall exports (merchandise and services combined) in April-August 2020 are estimated at $182.13 billion, while imports are expected to be $167.94 billion Even as India's merchandise trade performance did not improve despite opening borders, there seems to be some relief. Taking merchandise and services together, overall trade surplus for April to August of FY21 was estimated at $14.20 billion, a rare achievement during this period, in at least a decade. In fact, progressively, this fiscal has witnessed a combined trade surplus since April. There was a deficit of $45.11 billion during April-August 2019. Since 2011/12, only the first five months of FY17 witnessed a narrow deficit of $7.4 billion which otherwise stood at an average of nearly $43 billion. 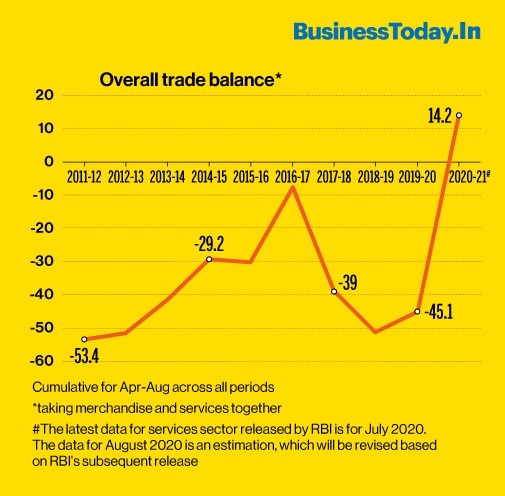 Overall exports (merchandise and services combined) in April-August 2020 are estimated at $182.13 billion, while imports are expected to be $167.94 billion.

On the other hand, both merchandise imports and exports have dropped to a five-year low in the current fiscal. The inbound trade fell 26 per cent while the outbound trade declined nearly 13 per cent, year-on-year, in August. Eventually, trade deficit, at $ 6.7 billion, widened to a-four month high. On a cumulative basis, imports were lower by 43.8 per cent and exports fell 27 per cent from the comparable period last year. Country's imports and exports are expected to see a sharp contraction in fiscal 2021.