The Memorandum of Understanding (MoU) was for cooperation in the fields of hydrography, health, customs capacity building between the CBDT and Customs of India and the Maldives Customs Service, establishment of passenger and cargo services by sea 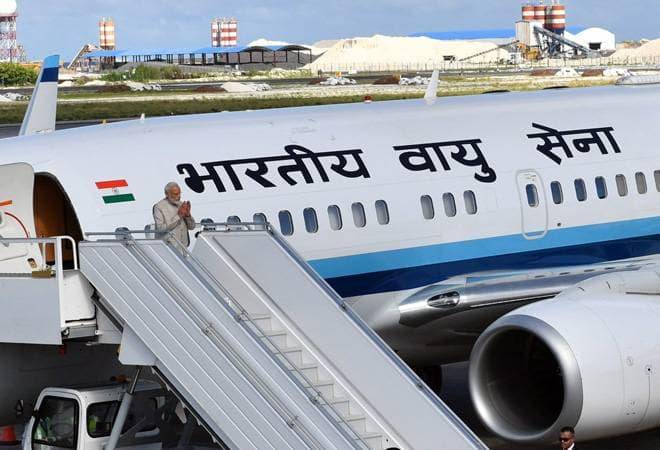 Modi arrived in the Indian Ocean archipelago on Saturday on his first foreign visit after re-election as Prime Minister to strengthen the bilateral ties, reflecting the importance India attaches to its 'Neighbourhood First' policy.

The first Memorandum of Understanding (MoU) was for cooperation in the fields of hydrography.  Another was on health.

The other agreements included on the establishment of passenger and cargo services by sea, cooperation in customs capacity building between the Central Board of Indirect Taxes and Customs of India and the Maldives Customs Service.

An MoU was also signed between the National Centre for Good Governance, Department of Administrative Reforms and Public Grievances and Maldives Civil Service Commission on Training and Capacity Building Programme for Maldivian civil servants.

A technical agreement on sharing white shipping information between the Indian Navy and the Maldives National Defence Force was also signed.

A coastal surveillance radar system and a composite training centre for the Maldives defence forces were jointly inaugurated by the two leaders.

After the talks, Prime Minister Modi said that the focus of the various projects that India is undertaking in the Maldives is to touch the lives of people.

He said India has agreed on the construction of a Friday Mosque in the southern part of the Maldives where an urban development centre is being built.

The two countries have agreed to start a ferry service between Kochi and the Maldives, he said.

Prime Minister Modi said that the launch of RuPay Card in the Maldives will give a boost to tourism in the island nation.

"There have been discussions over making the defense services stronger in Maldives.

India wants a strong relationship with the Maldives and believes that a strong and prosperous Maldives will be in the interest of the region," Modi said.

He said that maritime and defence ties are a top priority and the radar system will boost maritime security.

India is committed to help the Maldives in every way possible, he added.

In a joint statement, the two leaders reiterated their strong commitment to further strengthening and invigorating the traditionally strong and friendly relations between India and the Maldives. They also reiterated an abiding faith in, and commitment to democracy, development and peaceful co-existence.

President Solih reaffirmed his government's "India-First Policy and pledged his government's full support towards deepening the multifaceted, mutually beneficial partnership between India and the Maldives, which has traditionally been characterized by trust, transparency, mutual understanding and sensitivity.

Both leaders welcomed the signing of the USD 800 million Line of Credit Agreement in March 2019, for assisting the Maldives to achieve sustainable social and economic development. They also decided to work on other projects in the pipeline including in sectors such as port development, health, agriculture, fisheries, tourism and energy.

Highlighting the importance of combating the impact of climate change, especially detrimental to developing countries, including Small Island Developing States such as the Maldives, the two leaders agreed on the need to strengthen the global response to climate change, through the UNFCCC and the Paris Agreement.

They also agreed on the importance of maintaining peace and security in the Indian Ocean Region, and to strengthen coordination in enhancing maritime security in the region, through coordinated patrolling and aerial surveillance, exchange of information, and capacity building.

Modi and Solih emphasised the need to improve connectivity between the two countries through the establishment of enabling infrastructure and directed officials to expeditiously work towards starting a regular passenger-cum-cargo ferry service between Kochi (India) and Kulhudhuffushi and Male.

Both leaders agreed to enhance cooperation in the field of youth and sports, particularly in cricket. President Solih thanked India for its offer to construct a cricket stadium of international standards at Hulhumale under the Line of Credit, and for its offer for comprehensive development of cricket in the Maldives through professional coaching, playing in Indian tournaments and adequate infrastructure.