Air Vice Marshal RGK Kapoor said Pakistan used F-16s in this mission through their electronic signatures. A part of AMRAAM, air to air missile which is carried only on the Pakistani F-16s was recovered east of Rajouri within the Indian territory. 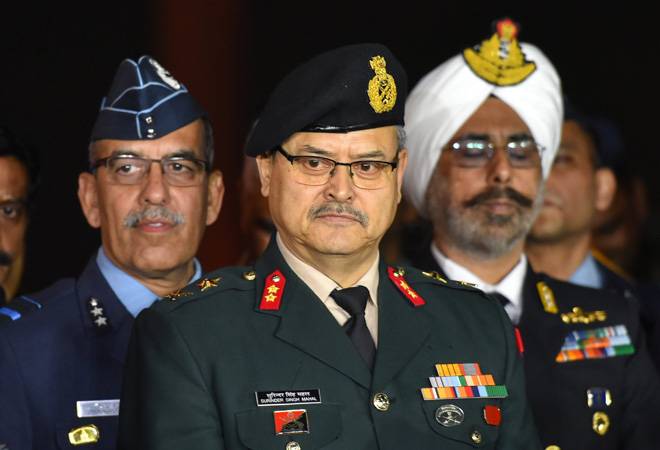 Indian Air Force today exposed Pakistan's lies providing evidence that the Pakistan Air Force had used F-16 fighter jets on Wednesday in an attempt to attack an Indian military installation. Pakistan had yesterday claimed that F-16 fighter jets were not use in yesterday's mission and no Pakistani aircraft had been shot down. In a joint press conference with the Army and the Navy, IAF officials showed the wreckage of the F-16 fighter jet that was shot down by the Indian Air Force's MiG 21 Bison Aircraft, a supersonic jet fighter and interceptor aircraft.

Earlier in the day, amidst mounting tension between the two nations, Pakistan Prime Minister Imran Khan announced the release of IAF Wing Commander Abhinandan Varthaman, who was captured during the dogfight between Indian and Pakistani air troops on Wednesday. Commenting on the development, Air Vice Marshal RGK Kapoor said we are happy that our pilot is being released. We see this as a gesture in consonance with Geneva Convention, he said.

Here are the key takeaways from joint press briefing by Army, Navy and Air Force.

Air Vice Marshal RGK Kapoor said Pakistan used F-16s in this mission through their electronic signatures. A part of AMRAAM, air to air missile which is carried only on the Pakistani F-16s was recovered east of Rajouri within the Indian territory. His comment came in response to Pakistan's repeated claim that no F-16s were used in the operation.

IAF fighters were tasked to intercept the intruding Pakistani aircraft and managed to thwart them. Although PAF jets dropped bombs, they were not able to cause any damage, he added. IAF is happy and looks forward to the return of Abhinandan, Air Vice Marshal RGK Kapoor said.

Commenting on counter terror strike, Major General said our fight is against terrorism, not Pakistan. But, as long as Pakistan continues to harbour terrorists, we will continue to target the terror camps, he added. Exposing Pakistan's claim that they intentionally targeted empty area, he said Pakistan aircraft were targeting military installations, like the Brigade HQ. But due to alertness of IAF, they dropped the bombs on our military formations, which were unable to cause any significant damage.

Rear Admiral Dalbir Singh Gujral, Director General Naval Operations said India is ready for any misadventure by Pakistan in the maritime domain. We want to ensure safety and security of our citizens. "Navy is deployed in high state of readiness and remains poised in all three dimensions, surface, under sea, to deter, prevent and defeat, in maritime domain. Assure you of a resolute, swift and strong response by Navy when needed, we stand one with army and air force to assure security," he said.

Also Read: What will be the process to repatriate IAF pilot Abhinandan to India from Pakistan?