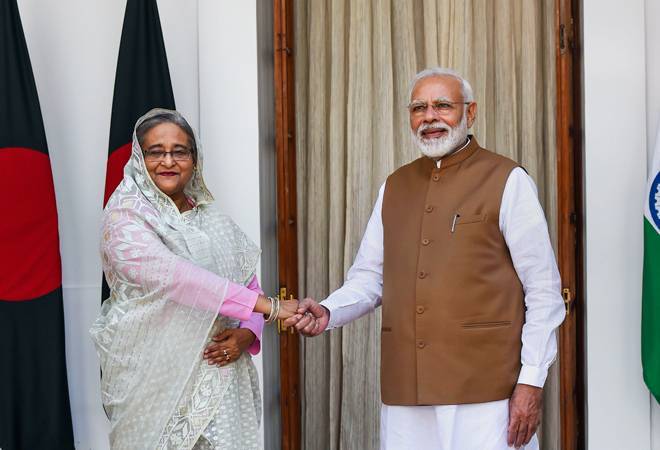 Export contributes a great deal to Bangladesh's growth, contributing 14% to 20% to its national GDP.

One fine day India woke up to the realisation that Bangladesh had overtaken it in GDP growth rate when the Asian Development Bank (ADB) updated its Asian Development Outlook (ADO) report in September 2019 - though this was clear from its earlier April 2019 report too.

The official data of both the countries, using their own fiscal calculations, however, show Bangladesh overtaking India in FY18, as shown in the following graph.

That is because of differences in their calculations. Bangladesh's 'fiscal year' calendar is from July 1 to June 30 but that of India is from April 1 to March 31. The ADB uses 'financial year' and counts fiscal years of both countries differently - for example, for it Bangladesh's FY19 ended on 30 June 2019 but that of India will run till 31 March, 2020. 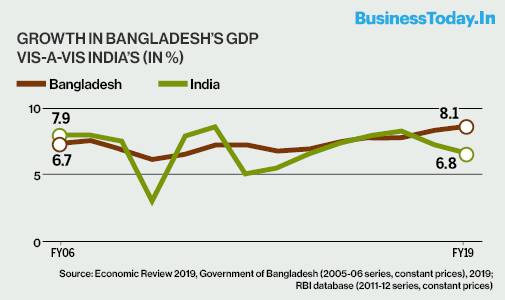 What has driven Bangladesh's spectacular growth in recent years?

Prof Selim Raihan of the University of Dhaka lists four major drivers and a minor one: (a) exports of readymade garments (RMG) (b) inward remittances (c) sustained growth in agriculture (d) growth in microfinance and (e) public investment in big infrastructure projects. Other experts list 'women empowerment' as well.

A distinguishing feature of Bangladesh's boom is strong growth in its manufacturing (industrialisation) and exports, unlike India's but very much like Japan, China, South Korea and other Asian economies.

A study by the ADB found Bangladesh to be among the Asian countries with the highest increase in their manufacturing share and output (GDP) growth during the 1970s-2010s, along with Bhutan, Cambodia, Malaysia, South Korea and Thailand. Its manufacturing has grown by a simple average of 10.2% during the past 14 years (FY06 to FY19). Analysis of data shows the services sector contributes most to the output in both Bangladesh and India while their agriculture is rapidly declining. 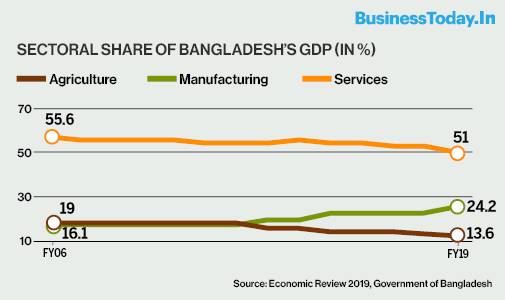 For the purpose of comparability, the construction's share has been deducted from India's services sector since it is a sub-sector of Bangladesh's industry, not services. 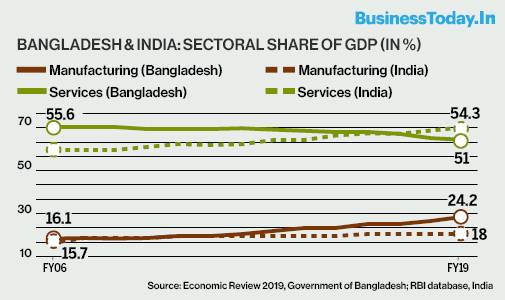 As the graph makes it clear, Bangladesh's manufacturing has taken off in a big way and contributes nearly a quarter to its GDP while in India's case it is still less than a fifth.

Consequently, Bangladesh's manufacturing is also providing more jobs. Agriculture remains the top job provider but services are fast catching up in both the economies. 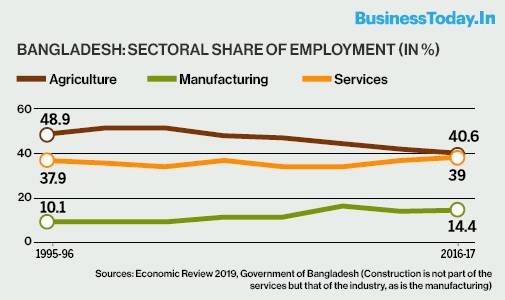 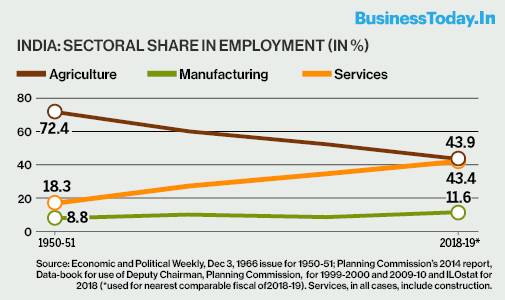 History talks of the dominance of Dhaka's Jamdani muslin in world trade during the Mughal era, drawing in pots of gold and silver to the subcontinent from Europe. Since it required great skill, it was "costly and could be afforded by only the very rich".

Now Bangladesh's garments, both readymade and knitwear, are redefining its economy. Prof Raihan says Bangladesh has emerged as the second-largest exporter of garments after China and constitutes about 45% of its manufacturing GDP and 7% of total GDP. It is also the largest labour-intensive manufacturing sector employing 5 million people, 80% of whom are women, and the fastest-growing sector. It has contributed more than 80% to Bangladesh's total export since FY13. 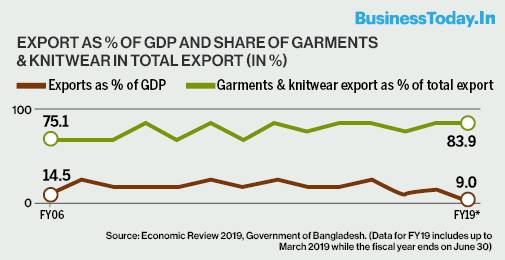 Export contributes a great deal to Bangladesh's growth, contributing 14% to 20% to its national GDP. The sudden dip in export for FY19 is because the data is up to March 2019 while the fiscal year ends in June.

What caused its garment sector to boom?

The country's status as a Least Developed Country (LDC) in the UN list - set to graduate to 'developing country' in 2014 - has helped in availing zero-tariff preferences offered by advanced markets like the European Union, China and Canada (India too accords such benefits).

Prof Nisha Taneja of the ICRIER points at a few critical other factors: (a) success in upgrading its RMG sector in the global value chain through backward linkages (b) establishment of large scale firms and (c) flexible labour market and low wages. Contrasting the scene with India's, she says though India too has developed strong backward linkages, its rigid labour laws and decades of restricting RMG production to small scale units inhibited growth of large scale units or achieve economy of scale.

Economist Prof Kaushik Basu has attributed this boom to discarding of the Industrial Dispute Act (IDA) of 1947. Both India and Pakistan inherited it from the British but Pakistan's military regime repealed it in 1958. This law, he says, has done more harm than good to India by restringing the ability of firms to contract workers and expand labour force.

Another key to Bangladesh's success is its incredible resilience in the face of decreasing arable land, population growth, flood, drought and salinity induced by climate change to improve its agricultural output. It is fast-moving to achieve self-sufficiency in food production - producing 41.3 million ton (MT) in FY18 against the target of 41.57 MT.

It is interesting that Bangladesh's services have been contributing more than 50% to national GDP and about 40% to employment and yet finds only a passing mention in its Economic Review of 2019 - which runs into 15 chapters and 271 pages.

The following graph highlights the top sub-sectors and their contributions to output. 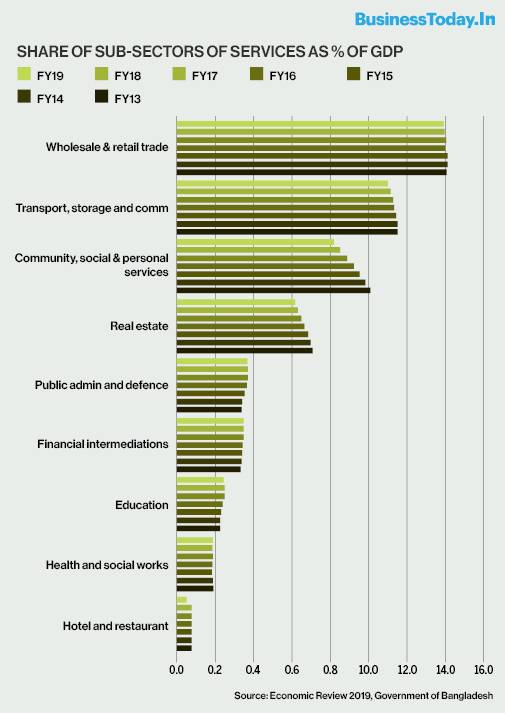 'Yes, there is economic slowdown, but it's temporary,' says Mukesh Ambani

Ola to get over Rs 1,400 crore funding from Microsoft for project on connected cars