Shah says India can not trust Imran Khan's soft diplomacy at a time when he did not even condemn the perpetrators of the suicide attack on CRPF convoy, which left over 40 jawans dead. 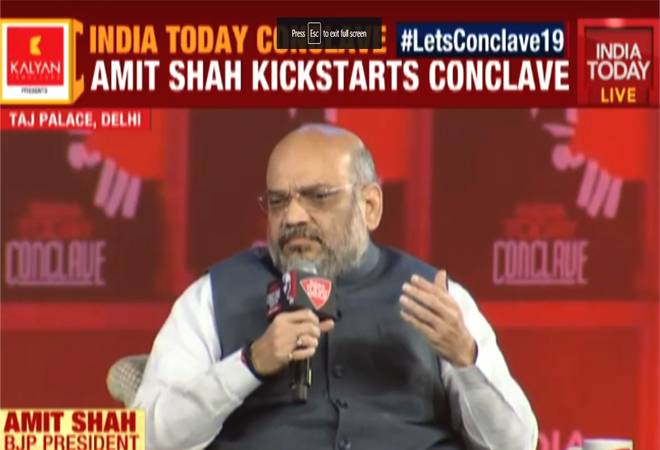 Slamming Pakistan on its double standard on terror, BJP Chief Amit Shah on Friday said that Pakistan Prime Minister Imran Khan did not condemn the Pulwama terror attack even once. During a session at India Today Conclave 2019, Shah said India could not trust Imran Khan's soft diplomacy at a time when he did not even condemn the perpetrators of the suicide attack on CRPF convoy, which left over 40 jawans dead.

On asking about the Modi government's aggressive policy on Pakistan, Amit Shah said the government had been able to create "fear" in the minds of those behind terrorism with its action against Pakistan-based terrorists. "I believe the track record of our government has been the best in dealing with terror since Independence... Maximum number of terrorists have been eliminated under BJP government led by Modi," he said.

"The Pakistan PM should have at least criticised the Pulwama attacks, at least once. How can we expect anything from him, or trust him. Maybe the situation is not in his control. At least he could have done lip service," he said.

On the question of the release of Wing Commander Abhinandan Varthaman from Pakistan in just over 24 hours, the BJP chief said that it was a big diplomatic victory. Varthaman's MiG 21 was shot and he bailed out after bringing down one Pakistani F-16 fighter during a dogfight to repel a Pakistani attack on Wednesday. He will be released by Pakistan via Wagah border around 4pm today. Pakistan Prime Minister Imran Khan had announced in Parliament on Thursday that Varthaman would be released on Friday as a "peace gesture".

Also read: Union Minister Nitin Gadkari says he is not in the run for prime minister's role

PF deductions to include special allowances along with basic salary: Supreme Court