India's gross domestic product (GDP) growth in Q4FY20 is the lowest in 44 quarters, according to the data by Central Statistics Office (CSO) Q4FY20GDP data is the lowest in 44 quarters

India's gross domestic product (GDP) grew at 3.1 per cent in the final quarter of financial year 2019-20, lowest in 44 quarters, according to the government data released on Friday. Overall growth for FY20 slumped to 4.2 per cent - lowest since FY09 when GDP was 3.09 per cent - compared to 6.1 percent in FY19, the Central Statistics Office (CSO) said.

The numbers announced by the government are in consonance with the expectations of many economists and experts on account of the economic slowdown in pre-Covid-19 period. The data also gave a glimpse into the impact of coronavirus lockdown on the economy after the lockdown began in the last seven days of March. 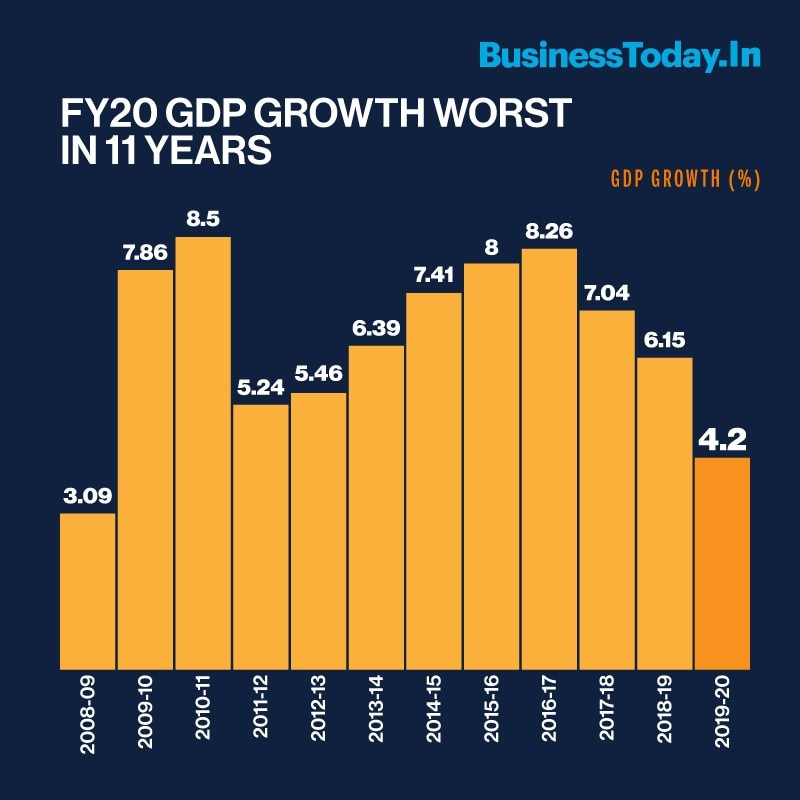 "In view of the global COVID-19 pandemic and consequent nationwide lockdown measures implemented since March, 2020; the data flow from the economic entities has been impacted. As some of these units are yet to resume operations and owing to the fact that the statutory time-lines for submitting the requisite financial returns have been extended by the Government, these Estimates are based on the available data. Consequently, the Estimates (Quarterly as well as Annual) are likely to undergo revision," CSO said.

India's GDP grew at 4.7 percent in October-December quarter, at 5.1 per cent in the July-August quarter and at 5 per cent in the April-June quarter of 2019-20. GDP is the total value of all the final goods and services that are produced within a country's borders within a particular time period.

"The 4Q GDP no at 3.1% vs consensus of 2.2% is much better. Full year FY20 GDP 4.2%  vs consensus of 4.4% is a miss. Farm sector growth of 5.9% in 4Q is the saviour. Manufacturing for 4Q came in at -1.4%. There has been a downward revision for 1Q, 2Q and 3Q FY20 GDP no's. What needs to be considered is that the April core sector data has been negative on all counts and this will be a drag on the 1Q FY21F numbers," Arjun Mahajan, Head, Institutional Business, Reliance Securities, said.

"The Q4FY20 GDP number came in better than expected at 3.1% (11 year low) though the downward revision in the previous three quarters takes away some of that relief. The poor data on growth of India's eight infrastructure sectors contracting by a record 38.1% in April led by cement, steel, electricity and coal was partly on expected lines. However this data does not portend well for Q1FY21 unless we see a fast and complete lifting of lockout with safeguards in place," Dhiraj Relli, MD & CEO, HDFC Securities, said.

In its latest monetary policy, the RBI had given an indication of the expected impact of the coronavirus crisis on growth. The RBI noted that given the uncertainties, GDP growth in 2020-21 is "estimated to remain in negative territory", with some pick-up in growth impulses from the second half of 2020-21 onwards.

Meanwhile, the eight core sectors had expanded by 5.2 per cent in April 2019, the data released by the Commerce and Industry Ministry on Friday showed.