INX Media case: The apex court said if Chidambaram's request for interim bail is not considered by the trial court on Monday itself, his CBI custody would be extended by three more days 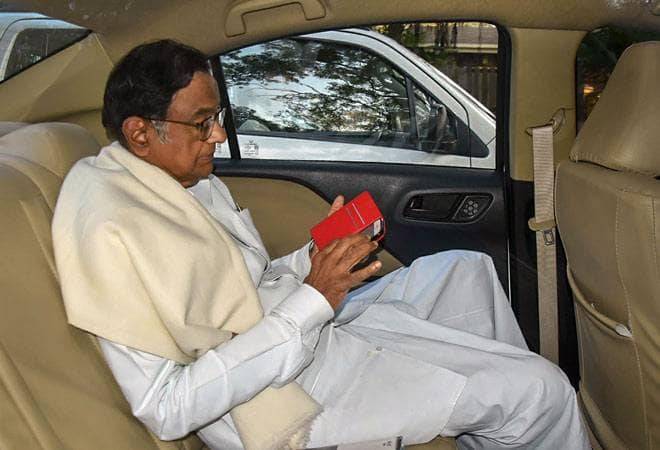 The Supreme Court Monday asked the trial court to consider P Chidambaram's request for interim bail in the INX Media corruption case after the former finance minister said that he not be sent to Tihar jail under judicial custody and offered to be in house arrest.

The apex court said if Chidambaram's request for interim bail is not considered by the trial court on Monday itself, his CBI custody would be extended by three more days.

A bench of justices R Banumathi and A S Bopanna directed CBI to file its response on Chidambaram's plea challenging the non-bailable warrant (NBW) issued against him and the subsequent orders of the trial court remanding him to CBI custody in the case.

Chidambaram's CBI custody in the INX Media corruption case is expiring today and he will be produced before the concerned trial court during the day.

Senior advocate Kapil Sibal, appearing for Chidambaram, told the bench that the former minister was arrested pursuant to the NBW and he has been in the CBI custody for last 12 days.

"The NBW should not have been issued. Either give me (Chidambaram) interim bail or put me in house arrest. He (Chidambaram) should not be sent to Tihar Jail," Sibal said, while questioning the issuance of NBW and the subsequent orders of the trial court remanding the former minister to CBI custody.

Remand orders of the trial court can be set aside by the apex court and Chidambaram should be given interim protection till the top court decides his petition, Sibal added.

"He (Chidambaram) has to file regular bail plea," the bench said, adding, "The competent court is seized of the matter. Why should we skip the jurisdiction of the regular court and the High Court?"

To this, the senior advocate said that if Chidambaram is sent to Tihar jail under judicial custody, his petition would become infructuous.

Additional Solicitor General K M Nataraj, appearing for CBI, opposed the grant of any interim protection to Chidambaram and said that an accused cannot say that he want to be in either police custody or judicial custody.

Sibal said that Chidambaram will be produced before the trial court today after expiry of his CBI custody and if he would be sent to Tihar under judicial custody, his petition before the apex court would become infructuous.

"Give me (Chidambaram) interim bail or put me in house arrest. He is a 74-year-old man and has been in CBI custody for last 12 days," Sibal said.

The bench said that Chidambaram can make a request in this regard before the trial court.

Sibal said however that the trial court would "reject" his request and the top court should give him protection till the pending petition is decided.

The bench, after hearing the submissions, directed Chidambaram to approach the trial court seeking appropriate relief in accordance with the law, including prayer for interim bail.

It said in case the prayer for interim bail is not considered by the concerned court, then Chidambaram's CBI custody will be extended by three more days.

The bench said it would hear Chidambaram's plea on September 5.

New income tax rules that impact TDS: All you need to know