JNU violence: JNUSU President said in her complaint that she was attacked by the mob and was hit on the head multiple times 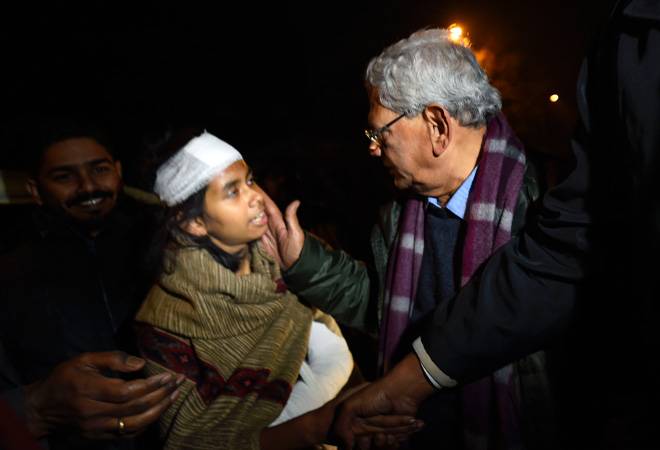 JNU violence: JNUSU President Aishe Ghosh said that she was hit several times by the mob

JNU attack: Jawaharlal Nehru University Students Union (JNUSU) President Aishe Ghosh has filed a complaint against the attack on the varsity students that took place on Sunday. "I am filing this complaint for the incident in which a mob conspired and acted with common intention to assault, intimidate and attempt to murder me, and request you to register an FIR and apprehend culprits at the earliest," said the student leader.

Aishe Ghosh said on January 5 that she had received information from students that students affiliated to ABVP along with unidentified men and women have gathered at Ganga Bus Stop with weapons.

Ghosh said in her statement: "I along with Nikhil Mathew (MA Labour Studies) who was also present there, were surrounded by a group of persons of that mob most of whom were wearing masks. The mob of 20-30 persons dragged me behind a car standing near the 24*7 and surrounded me and despite my pleading did not let me go and attacked me with rods while I had fallen down. I remember that one of the people was of medium height wearing a brownish red sweatshirt with UCLA written on it. I saw his face as he was facing me and did not have a mask on and can identify him if I see him."

She said that she was attacked by the aforementioned people and was hit on the head multiple times. She said that when she fell down, she was kicked and hit with a rod on her hand, body, head, chest and back. Ghosh added that Nikhil Mathew tried to save her but he was also attacked by the unidentified people. "The intention of the group of men and their acts was definitely to murder me and other persons associated with me," she said as per the complaint.