Karnataka bypoll results: Siddaramaiah has said that he expected voters to punish the rebel MLAs but he was proven wrong as he steps down as CLP leader 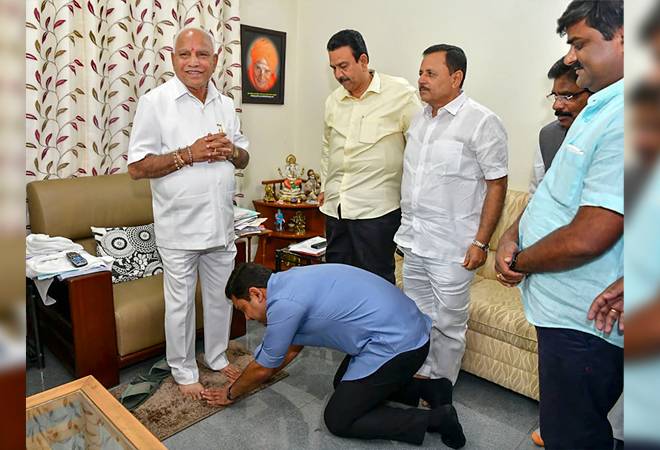 Karnataka by-election results live updates: The Bharatiya Janata Party (BJP) has bagged 10 seats out of the 15 constituencies that went for the bypoll elections last week. The Congress that had won 12 out of the 15 seats in the 2018 assembly polls only held on to two of them.

The BJP needed to win at least six of the 15 seats to remain in a majority in the 225-member assembly (including the Speaker, who has a casting vote), which would still have two vacant seats -- Maski and R R Nagar. In the assembly with the current strength of 208 after the disqualifications, the BJP has 105 MLAs (including an independent), the Congress 66 and the JD(S) has 34 MLAs. There is also one BSP member, a nominated member and the Speaker.

The bypolls were held to fill the vacancies caused by the disqualification of 17 rebel Congress and JD(S) MLAs, whose revolt led to the collapse of the 14-month-old H D Kumaraswamy-led coalition government in July and paved the way for BJP to come to power.

Follow the updates of the Karnataka bypoll results here:

4:50 pm: "I assumed voters would punish the disqualified MLAs, I was wrong," said Siddaramaiah.

3:40 pm: "As a leader of legislative party, I need to respect democracy. I have resigned as Congress Legislative Party leader. I have submitted my resignation to Sonia Gandhi Ji," said Siddaramaiah.

2:55pm: According to media reports, Karnataka Congress leaders Dinesh Gundu Rao and former CM of the state Siddaramaiah are likely to resign from the party post. Siddaramaiah will be addressing the media at 3:30 pm.

2:40pm:  Independent candidate Sharath Bachegowda, who was earlier expelled from BJP for anti-party activities after he contested the bypoll as a rebel, was heading for a win in Hoskote.

2:35pm: The Congress, which won 12 of those 15 seats in the 2018 assembly polls, was leading only in two segments -- Hunsur and Shivajinagar, while its former ally the JD(S) trailed in all the 12 seats it contested.

2:30pm: "I will give a good administration in the next three-and- half years with the help of our ministers and MLAs," says Karnataka Chief Minister B S Yediyurappa.

2:00pm: The ruling BJP has retained majority in the Karnataka Assembly. The saffron party has bagged six seats in the byelections.

1:35pm: Ruling BJP wins six seats in the bypolls in Karnataka, while leading in six others; retains majority in the Assembly.

1:30pm: PM Modi, in a rally in Hazaribagh, Jharkhand, said that the people of Karnataka have declared that Congress and JDS will not be able to betray the BJP. The prime miniter expressed his gratitude towards the people of the state.

1:25 pm: "I am happy that people have given a very good verdict. Now, without any problem we can give a pro-people and a stable government," Karnataka CM BS Yediyurappa said.

11:45 am: Karnataka Chief Minister BS Yediyurappa celebrates BJP's lead in 12 seats with his son BY Vijayendra.

11:20 am: Karnataka minister Ashok says BJP will decide if all the 12 defectors, who are winning the seats for the party, will get Cabinet berths.

11:10 am: "BJP's Chikkaballapur MP worked against the party and worked for his son. Party will take action against him. But we knew we would get 12 seats. CM Yediyurappa will take a call on cabinet expansion and if all the 12 new MLAs should be in the Karnataka cabinet," said Karnataka minister Ashok.

10:55 am: "We have to agree with the mandate of the voters of these 15 constituencies. People have accepted the defectors. We have accepted defeat, I don't think we have to be disheartened," said Congress leader DK Shivakumar.

10:30 am: BJP appears to be winning the Yellapur seat as it has gained a massive lead. The party has started celebrating Shivram Hebbar's win already.

10:20 am: BJP leading in 10 seats, Congress and JDS leading in 2 seats each, Independent leading in 1 seat, as per EC trends.

9:55 am: JDS is leading with 2091 votes after round 2 of counting of votes in Yeshwanthpur.

9:50 am: Bharatiya Janata Party (BJP) candidate, Dr K Sudhakar is leading by 818 votes in the Chikkaballapur Assembly constituency of Karnataka, as per early trends.

9:45 am: BJP leading in 9 seats, Congress and JDS leading in 2 seats each, Independent in 1, as per EC trends.

9:43 am: BJP leading in Yellapur, Chikkaballapur constituencies, Congress leading in Shivajinagar and Hunasuru constitiencies and JDS leading in KR Pete, according to official EC trends.

Massive lead for the BJP in Karnataka by-polls. Only revalidates the overwhelming mandate people of Karnataka had initially given to the BJP (single largest party) during the assembly elections.